NASDAQ:WKHS pushed up another 5.81% to close out the best week for the stock in months. Workhorse is still rising off of the tailwinds of the GM-Nikola partnership, despite Nikola’s stock plunging back down to Earth. It has been a wild ride for Workhorse (NASDAQ:WKHS) investors this week as shares […]

It has been a wild ride for Workhorse (NASDAQ:WKHS) investors this week as shares spiked over 30% from Monday’s opening price of $18.06. The stock is now up over 700% since its June 3rd price of $2.95 and is up over 4500% since the beginning of 2019. But as investors look more into the financials of Workhorse, it is becoming clear that just like most of the other companies in the electric vehicle sector, Workhorse is being boosted by speculation and not by actualized profitability.

Not to say everything is bad for Workhorse, as the Ohio based company has created some strong business partnerships during the past few months. Notably, its stake in Lordstown Motors should be a nice influx of income as the company prepares to go public later this year. Further boosting Workhorse’s Wall Street credibility is a partnership with Hitachi that gives Workhorse access to their vast supply chain and national reach. Finally, investors are still clinging to the possibility of Workhorse winning a chunk of the USPS vehicle fleet contract that is due to be awarded at some point in the near future. 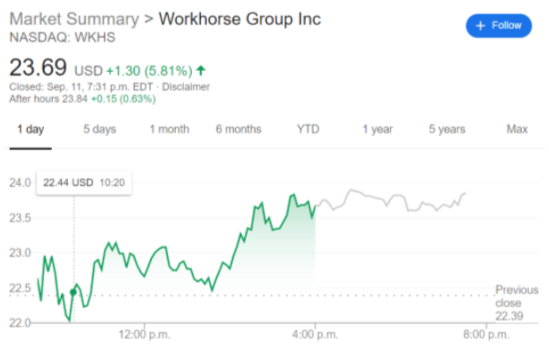 The future does seem bright for Workhorse and much of that is definitely already baked into the current stock price. The main catalyst for this week’s surge was the partnership between General Motors (NYSE:GM) and Nikola (NASDAQ:NKLA), although shares of Workhorse have continued to rise as Nikola’s have fallen all the way back down. This could mean investors believe in Workhorse as a stronger bet in the short term, at least until Nikola gets its trucks on the road sometime after 2022.

Sat Sep 19 , 2020
Uniswap issued a governance token, Kraken is the world’s first crypto bank and there are more “newbie” bitcoin investors than any time in the past two years. Top shelf Crypto’s bankKraken Financial, a newly formed division of the popular crypto exchange, has become the first firm to receive a special type […]