The administrators at Wigan Athletic have suggested that an anonymous principal bidder withdrew an offer for the club last week after publicity on social media claimed that a different party had made a lower final bid of £2m. The Latics have been in administration since the start of July and […]

The administrators at Wigan Athletic have suggested that an anonymous principal bidder withdrew an offer for the club last week after publicity on social media claimed that a different party had made a lower final bid of £2m.

The Latics have been in administration since the start of July and are currently in the hands of Manchester-based Begbies Traynor.

The joint administrators – Paul Stanley, Gerald Krasner and Dean Watson – are working to sell the club to new owners and say that serious discussions are taking place with at least three bidders.

But a statement from the administrators say that one of the principal bidders – who had been ready to deposit funds of £4m with their lawyers last Monday, September 14 – backed out of the deal after seeing publicity from social media the previous day of a lower rival offer.

Suggestions that a French-American group had made a final offer of £2m surfaced and the anonymous bidder had been ‘put off’ by this and withdrawn the £4m offer they had been due to deposit with their lawyers.

The speculation also led to similar low offers from other parties, the administrators say, one of these being £1.5m for all the assets on sale.

The statement adds that no such bid of £2m was received from the French-American group on Sunday, September 13, but this eventually came on Friday, September 18.

The £2m bid was rejected, however, as it included a clause which would have seen the administrators pay £1.3m to creditors so Wigan avoid a further 15-point penalty.

The joint administrators say if this group wishes to ‘rethink’ their bid and remove this clause, then the offer will be ‘seriously looked at’.

Explaining the reasons why this bid was turned down, the statement read: “Under English law, before we could pay anything to the creditors we must clear the expenses of the administration. Fans will appreciate that no income has been received and no season ticket sales have taken place.

“We have therefore had to pay June, July and August wages out of the player sales and these amounts included wage deferrals from early in the season plus a month’s salary at Championship rates to all players who left.

“As a result of this there is a considerable liability to HMRC for PAYE on wages plus the VAT on player sales.

“Taken together with the costs of the appeal, the loss in administration is over £3m which has to be paid before any dividend can be paid to the unsecured creditors.

“That becomes an impossibility when the actual offer is only £2m. As we have said in the above paragraph, if this bid is remade it will be given very serious consideration.”

Explaining why so many players have been sold, the joint administrators say the wage cap which has been introduced in League One this season in light of the impact of the coronavirus pandemic has been the main reason.

Clubs in the third tier of English football now have an annual limit on player wages of £2.5m and Wigan’s had previously been more than £12m.

The statement said: “It was therefore necessary to offload the bulk of valuable players to reach this target and have a club that could still operate efficiently within League One.

“We should also point out that a number of players did not want to play in League One with the lower wage bill and requested a transfer.”

The joint administrators have also confirmed that the sale of the club’s Euxton training ground to Preston North End has not been used to pay any fees owed to them.

The only ones which will be include the legal fees associated with appealing the club’s 12 point deduction for entering administration and which ultimately led to Wigan being relegated from the Championship last season.

The statement said: “Since day one we have drawn no monies for any fees and have funded disbursements out of our own pocket.

“Apart from the legal fees for the appeal, no fees will be charged by the Joint Administrators or their lawyers to the football club.

“We continue to still discuss at a serious level with at least three bidders an offer that would allow us to do all of the above including payment of the 25p.

“Contracts have been sent out to the most interested parties and once one party signs the contract we shall let you know as soon as practically possible.”

The UAE, Israel, the press and public relations | Wendy Kalman

Tue Sep 22 , 2020
Taking a look at how this huge story was viewed in the press Last month, the United Arab Emirates (UAE) formally ended its boycott of Israel and signed an agreement normalizing the two countries’ relationship. Only the third Arab country ever to recognize Israel, in some quarters this was hailed […] 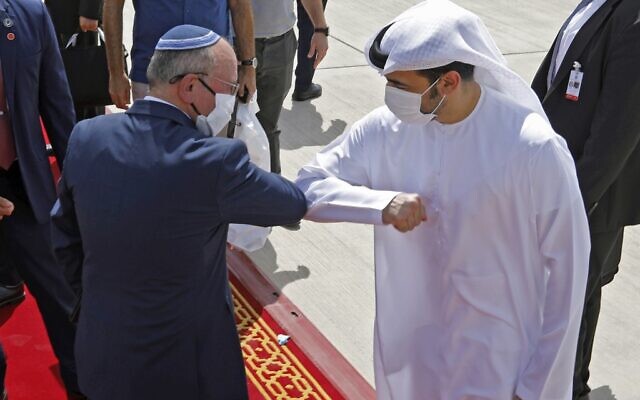