Sarah Austin, CMO of Kava, at her Bay area home. Chris @Tolles The pandemic has exposed many flaws in systems we habitually relied on. One of those exposed systems has been the banking and money industry. When it came time for the government to send out stimulus checks many of […]

The pandemic has exposed many flaws in systems we habitually relied on. One of those exposed systems has been the banking and money industry. When it came time for the government to send out stimulus checks many of the checks went to the wrong individuals, deceased individuals and some have yet to receive their checks. How could this ongoing fiasco be avoided? A digital dollar. FinTech has been a growing industry over the last decade and the recent shift in growth seen today within blockchain based finance is undeniable. The digital economy has taken the spotlight this year amidst most of the world’s population shifting to digital payments due to the COVID-19 pandemic. This trend of the digital dollar has also significantly grown as stablecoins has surpassed a total capitalization of over $10 billion. The market size of blockchain based finance currently sits at around $7 billion of total value locked today whereas in June of 2020 it was $1.5 billion. with the anticipation to hit over $39 billion by 2025. Many analysts are calling one particular emerging market dubbed DeFi for decentralized finance to be the market of the decade.

To understand the size of this industry, simply take a look at the history of digital finance and its evolution over time. For centuries we’ve relied on payment systems to purchase the goods and services we need. Beginning with the bartering system utilizing the exchange of livestock, grain, and shells that lead to the exchange of measurable instruments like metal coins, white deerskin segments, the wampum, gold, and more recently the gold-backed dollar, debit cards, and credit cards. The most recent evolution of money being electronic payments and digital finance. There is one thing that’s shaped the evolution of money that can be seen throughout history: consumer preferences and trends tend to shape the method of payment. Typically consumer preferences surround convenience.

“Over the next decade, we’re going to see more and more decentralized financial products and services as the emerging DeFi sector continues to grow at exponential rates. The most recent evolution in digital finance is pointing to digital currencies. For the first time in the history of money, we’re seeing the 5.5 Trillion dollar banking market turned upside down as a result of FinTech. History teaches us that technology always wins. Whoever has the best tech wins the customer,” Sarah Austin, CMO of Kava, a next generation decentralized finance platform, told me.

The Bank of America Card was the first credit card to be issued by a third party bank in 1958. Billpay and online banking didn’t emerge until 1994 where shortly after in 1997 the mobile web payment (WAP) was introduced. Though the first electronic payment was sent in 1971, the emergence of the internet and digital payment over the internet first started in the 90’s. In the 2000’s we saw massive growth in the infrastructure being created for the convenience of digital payments primarily as a result of cell phones. People wanted to pay easily on the go and as a result of this consumer preference, Paypal, and other startup companies flourished as Bitcoin was getting off the ground in 2008. Now in 2020, 90% of smartphone users will have made a mobile payment. eMarkter projects mobile payments will rise to $130.3 billion by the end of this year.

The following teen years of this decade have proven massive growth in new generation digital payment platforms like Venmo, Zelle, WeChat Pay, Alipay, and others. Why? The consumer preference trends have been driving the evolution of the past decade. Similarly in the decade of 2010 the wider financial technology sector saw blockchain as this nascent hobbyist technology. It wasn’t until the end of the decade in 2019 that the industry saw thousands of companies with massive infrastructure and  Silicon Valley venture capital firms backing world class teams.

Sarah Austin predicts this next decade to be another of massive growth, “In this next decade we’re going to see the proliferation of startups addressing the digital finance market. We’ve begun to see the very beginning of the newest emerging market. With a total market capitalization of $12 billion, DeFi has taken the FinTech spotlight in the past 90 days. More financial institutions like Square, Coinbase and Binance are making USDX and other stablecoins spendable in everyday life by introducing Visa Debit Cards to spend digital assets anywhere.” As a demonstration of how financial institutions are making major moves in the space, Binance Thursday announced an integration of Kava to bring DeFi to their users. “There will be winners and losers, but I’m keeping an eye on Silicon Valley based startups as more traditional VCs start investing heavily in the space. Kava Labs is a high-growth DeFi Silicon Valley startup. I tend to trust startups with their roots in Silicon Valley because of the network effect and founder vetting process that lends to serial entrepreneurs.”

While most notable to the outside world for her stint as a reality star on Bravo TV’s “Startups: Silicon Valley,” inside of Silicon Valley Sarah Austin is known for being a tech marketer and entrepreneur. As a published author on the topic of entrepreneurship, she’s prolific in interviewing entrepreneurs like Tim Draper the founder of DFJ and famous Bitcoin bull, as well as the founder of Binance, CZ about what’s next for the digital currency sector. After forming a career in the broader digital finance sector, she decided to make the jump full time to blockchain based finance. Austin left Oracle Financial Services where she served the biggest banks in the world to focus on Financial Technology (FinTech) products and services at the intersection of innovation and digital transformation. She’s now the Chief Marketing Officer of Kava Labs.

Coming from Oracle Financial Services, with a strong network in the digital currency space, she had the pick of the litter when choosing the best DeFi startup. “I met with most of the Silicon Valley DeFi CEOs and having previously been a CEO three times as a VC backed founder, I know what to look for. After several prominent Silicon Valley VCs recommended talking to Kava for their strong developer and leadership team, I met with Brian Kerr, Kava’s CEO who thoroughly impressed me. Not only for his strong track record as CEO of a Forbes ranked company with a $175Million valuation, but he’s a leader I believe in. When I joined, it was prior to the launch of the Kava lending platform and KAVA, the native token of the Kava blockchain, was trading at $1.00. Now just two months later, post-launch, the platform has issued millions of dollars in USDX loans and the KAVA token has grown to $5.50. That’s real marketcap growth of over 550% and we’re just getting started.” While there are now thousands of digital coins out there Kava is shaping up to be the hidden gem of the decade. “Kava is a decentralized bank. Think of Kava as a community bank run by the people for the people where everyone who contributes will earn their fair share in rewards. The more users contribute the more money they make, just like the early days of Bitcoin.” Kava’s growth-by-decentralization model has the media calling Kava the Uber of Bitcoin.

The reason Kava is a hidden gem is due to its broader financial services within the digital fintech space. Any application, network, or blockchain can integrate with Kava’s open platform. Services that hold crypto assets can integrate Kava to offer their users Kava’s financial services like loans, stablecoins, and high-yield interest accounts. This is witnessed by financial institutions integrating Kava to open up DeFi products to their users. As reported Thursday, Binance.com is the first financial institution that’s utilizing the power of enterprise integrations to bring DeFi to BNB users who can earn as much as 25% APR with a new Kava powered feature called Binance Staking. Kava is essentially the foundational protocol for modern financial applications to operate and serve a global user base. There is already a growing ecosystem of apps built on Kava. As more applications integrate Kava and more users leverage its services, the Kava network will become more robust, liquid, and better able to serve its growing customer base. Importantly, as the Kava platform increases usage, the KAVA token will be consumed by the protocol at a faster and faster rate becoming more scarce benefiting those that hold Kava for the long term.

“Powered by revolutionary technology and owned by its users, Kava’s decentralized bank has the potential to revolutionize banking and finance by removing middle men, unnecessary fees, and giving users the ability to earn more with their digital assets,” Ms. Austin told me. While traditional finance companies are stretching to find ways to extract more value from their customers, Kava aims to help its customers earn more with what they have and put financial power back into the hands of the customers.

Fri Sep 18 , 2020
By Stefanie Dazio and Tom Krisher | Associated Press LOS ANGELES — Crew members of a Southern California dive boat told investigators they were not trained on emergency procedures before a fire broke out last year and killed 34 people, according to federal documents released Wednesday. Investigators say the cause […] 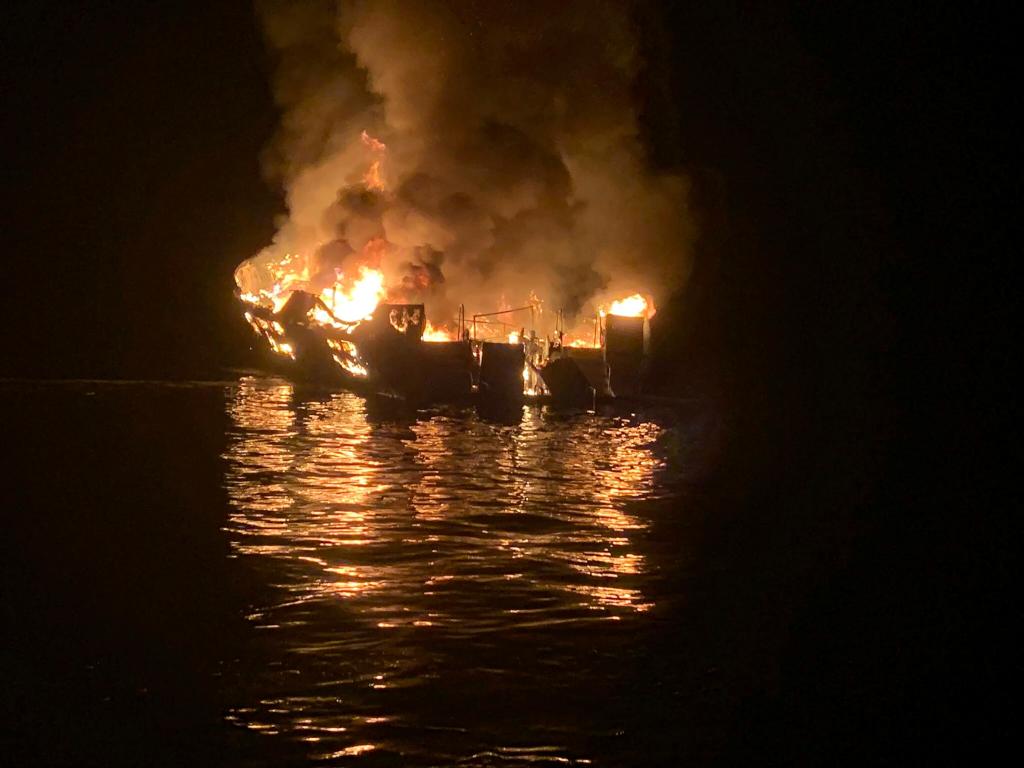