The coronavirus (COVID-19) is impacting the global economy and raising fears of a recession. What causes a recession and what are the signs?

Economic inequality in the United States is real and deeply damaging to the living standards of the vast majority of families.

We asked policy experts on the left and the right about how the United States can reduce economic inequality. Here are the ideas they offered:

Some people, looking at what hedge fund managers make and what security guards make, believe the disparity to be unjust. However, it is one thing to document economic inequality, it is another to show that those inequalities have negative consequences.

Over the past 50 years, the periods that have seen the strongest income growth at the top have also seen the biggest declines in poverty and increases in middle-class incomes. Countries with more inequality tend to have lower- and middle-income citizens who are richer than their counterparts in nations with less inequality. And while inequality has risen, most evidence suggests that economic mobility has been unchanged over recent generations.

If the children of security guards had as good a shot as everyone else at becoming hedge fund managers, then we would expect that among kids with parents in the bottom fifth of family income, just one in five would remain in the bottom fifth as adults. For white boys and girls, the actual percentages are 28% and 33% – not far off from 20%. But for Black boys and girls, the figures are 50% and 62%.

Policymakers must address entrenched childhood poverty – poverty involving not just one’s family but also one’s neighbors, poverty that occurs not just temporarily but over many years, and poverty that spans multiple generations.

Doing so will require expanding access to high opportunity neighborhoods, investing in early childhood and shoring up marriage where it has become an anomaly.

It is no coincidence that America has grown more unequal as its labor movement has lost power.

In the American labor movement’s postwar heyday, 1 in 3 private-sector workers belonged to a union. Collective bargaining was a key driver of equality, winning better wages and terms of employment – particularly for less skilled workers.

But today barely 1 in 20 private-sector workers have a union card. As they lost their power to bargain collectively, workers’ wages stagnated, even as corporate profits skyrocketed.

Low- and middle-income households saw their share of the nation’s income fall, and the wealth gap between the nation’s richest and poorest families more than doubled.

The steady erosion of unions over the past 50 years has been responsible for as much as a third of the rise in inequality among men and one-fifth among women.

Workers must have a seat at the table. But America’s dysfunctional labor laws, and the unions they support, prevent that from happening.

Nearly two-thirds of Americans approve of labor unions, and nearly half of America’s nonunion workers would vote for a union if given the opportunity – but they also want major reforms.

Workers say they would prefer representation in a cooperative relationship with an employer, even if that meant no power to make decisions, over representation with real power that management opposed. They place a premium on collaboration with management and input on corporate decision-making and prefer these alternative means of worker voice to traditional but confrontational ones like strikes.

Rather than allow inequality to fester, or try to solve it with government regulation and redistribution, organized labor affords workers a means to achieve for themselves a full share of the nation’s prosperity.

We need political will on wage gap

Economic inequality in the United States is real and deeply damaging to the living standards of the vast majority of families. But it’s eminently fixable so long as we’re willing to make a pronounced break with policies of the past to make income growth a genuine political priority.

The roots of inequality’s rise after 1979 are in U.S. labor markets, particularly in the failure of paychecks for most workers to rise in line with broader measures of economic growth.

The steps to reducing inequality are clear: Rebuild the institutions and policies that provide workers leverage and bargaining power in labor markets, or build new ones.

Policymakers should re-target genuine full employment (the Fed is making good steps in this direction). The federal minimum wage should be substantially increased. The right to form unions should be vigilantly protected. The unemployment insurance system should be modernized and made substantially more generous, both as a safety net during bad times but also to make the threat of job loss less corrosive to workers’ confidence in wage bargaining with employers.

The real obstacle to this agenda is not finding the perfect technocratic policy design; it’s raw political power. The real innovation we need is a genuine social movement dedicated to a more equal economy.

— Josh Bevins is director of research at the Economic Policy Institute.

Thu Sep 24 , 2020
Technavio has been monitoring the automotive audio amplifier market and it is poised to grow by USD 319.69 mn during 2020-2024, progressing at a CAGR of over 2% during the forecast period. The report offers an up-to-date analysis regarding the current market scenario, latest trends and drivers, and the overall […] 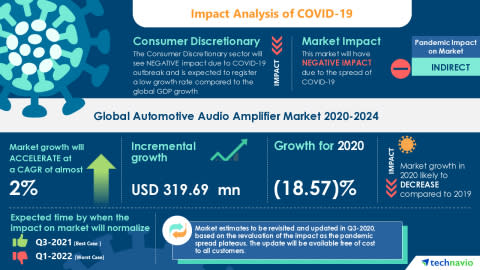