Greg Morena owes the city of Santa Monica about $31,000 each month in rent. The former City Council member owns and operates two restaurants on the Santa Monica Pier, the Albright and Rusty’s. When the city shut down the tourist attraction in March due to the pandemic, Morena said he […]

Greg Morena owes the city of Santa Monica about $31,000 each month in rent. The former City Council member owns and operates two restaurants on the Santa Monica Pier, the Albright and Rusty’s. When the city shut down the tourist attraction in March due to the pandemic, Morena said he had no way of paying his rent, and no way of doing takeout.


“Anything less than 80% of sales coming in and you don’t have enough money to run the business operationally, and rent is the greatest cost,” Morena said. The pier reopened in June after a three-month closure, allowing patrons to once again walk around and visit the various vendors, but business has been slow to return. “Last month we were at 25% of sales to the same month the previous year.”

Morena says his business is highly cyclical. Whatever money he doesn’t make in the summer is money he won’t have to keep his restaurants afloat in the winter. He asked the city for rent abatement during the months the pier was shut down, cutting off access to his restaurant, but the city declined. Instead, he can defer his rent for six months, and then he’ll have a year to pay it all back. With sales where they are and foot traffic at the beach slowing during the winter months, he says paying that money back will be near “impossible.”


According to the National Restaurant Assn., the pandemic cost the restaurant industry $120 billion in sales between March and May. That number is expected to climb to $240 billion by the end of the year (prepandemic projections for 2020 were $899 billion in sales).

Brittney Valles, owner of Guerrilla Tacos in the Arts District downtown, says she began experiencing a decrease in sales just before the shutdown in March, and that sales have continued to slow. Some days, she does a total of $1,000 in takeout sales, which isn’t nearly enough to cover basic expenses.

When Los Angeles restaurants shut down in March, Valles asked her landlord if he’d be willing to abate the $26,750 she pays in rent each month until she could get a better grasp of how her future might play out.

“He asked why I was asking for this and asked if business wasn’t going well,” she said. “He thought in two weeks this would blow over.”

Frustrated and unsure of her options, Valles sent a letter to her landlord stating that she wasn’t going to pay the rent. She said she saw a letter sent from the Cheesecake Factory chain, stating it could not pay rent at any of its locations on April 1, and she used it as a template.

When Valles received PPP money in May, she sent her landlord a check for $40,000. She hasn’t paid any rent since. Valles’ landlord had not responded to calls for comment as of press time.


There is a temporary eviction moratorium — for commercial businesses and residences — in Los Angeles County that’s preventing Valles’ landlord from ousting her from her restaurant space. But it’s a temporary Band-Aid for a much larger issue.

There is no current plan in place nationally or locally to bail out restaurants and landlords. When back rent is due, most businesses will already be in serious debt, with no ability to pay back or current rent. If the landlords abate rather than defer rent, some of them won’t be able to pay their mortgages.

“There hasn’t been any mandate on mortgage relief,” said Dana Pratt, deputy director of tenant protections and rent stabilization at the L.A. County Department of Consumer and Business Affairs. “Typically it’s in the form of a forbearance [deferring payment for a time] and the average forbearance period has been about three months.”

“This whole big bad property owner out to kill the small business, it’s an archetypal fallacy we love to buy into, but it’s way more complicated than that,” said Hall, who advocates for more than 300 businesses in the city. “You have the mom-and-pop property owner who owns one building and they have debt on it and they are depending on the rent income as much as anyone else to survive.”

Hall stressed the need for a government bailout package that would help both property owners and restaurants. He, along with local restaurant owners Nancy Silverton, José Andrés, Suzanne Goin and Caroline Styne, are part of the Independent Restaurant Coalition, a nationwide organization advocating for restaurants. Their main goal is to get the federal Restaurants Act, also known as HR 7197, passed.

The bill, introduced in June , would establish a $120-billion revitalization fund for small and independent restaurants. Grants would be given to restaurants based on projected revenue differences between 2019 and 2020 (restaurants that hit their 2019 revenues or above would not be eligible). The grants are designed to be used to cover wages, rent, mortgage and other costs related to running a restaurant or adjustments made to run a restaurant during the pandemic.

Styne said more than 200 members of Congress and 27 senators, including Kamala Harris (D-Calif.) and Senate Minority Leader Chuck Schumer (D-N.Y.), have signed on to cosponsor the bill.

“I’ve never asked the government for anything, but this is pathetic that we have to ask for this, and they need to step up,” Styne said.

Styne, who with Goin owns A.O.C. and the Larder, said her landlord lowered the rent at her West Hollywood restaurant to match his mortgage payments, but it’s still not sustainable.

“If there was legislation that protected mortgage holders and tenants, then that would be the ideal situation,” she said. “I don’t hold it against my landlord at AOC that he has a mortgage to pay. Is he supposed to default on his mortgage and lose the property? That doesn’t help anybody.”

While many wait for a government bailout, others are turning to percentage rent as a possible temporary solution.

Jim Crocenzi, an Orange County-based senior vice president of retail services for CBRE, the largest commercial real estate company in the country, is seeing tenants and property owners create amendments to existing leases that allow tenants to pay a percentage of their gross sales or a revenue-sharing payment plan to avoid a vacancy.

“Smart landlords know they are much better off doing everything possible to retain the tenant because the cost to replace them in this environment is going to be high,” Crocenzi said. “The typical tenant-landlord relationship by nature is supposed to be a partnership.”

Meghann Martindale, global head of retail research for CBRE, said there is added incentive for property owners to hold on to food and beverage tenants.

“Usually it’s the restaurants that differentiate a property,” she said. “It’s a traffic generator. Landlords are going to do more on the restaurant side in the way of supporting them to avoid that permanent closure than on the retail side.”

On a panel during the Western Foodservice and Hospitality Expo in August called “We’re Not Going to Pay the Rent: Leasing Negotiating Tactics for Restaurants,” corporate real estate attorney and restaurant owner Jordan Bernstein urged restaurants to be proactive if they want to ask for a percentage rent.

“Don’t just defer off your rent and sit back and not pay rent,” he said. “You’re effectively just creating debt. Everybody knows that even the most successful restaurants that work on high double-digit margins can’t afford hundreds of thousands of debt. Work out some sort of percentage rent.”

Restaurant real estate broker Will Knox says that willingness to negotiate is key to staying in business, rather than relying on the city moratorium on evictions or a government program that doesn’t exist yet. Knox, who also was part of the panel, suggested using the new geographical footprint of a city during a pandemic as a talking point.

“So many restaurants signed leases based on the premise that there is a certain amount of baked-in business with offices in the neighborhood,” he said. “So when 50% of those workers never return to the office, how does that change the restaurant landscape, especially with property owners? You have to be able to say to a property owner, ‘Look, I signed this lease five years ago when there was walking traffic, [but] your asset isn’t as valuable anymore.’”

Blaqhaus owner Takela Corbitt considers herself one of the lucky ones. She pays $6,500 in rent for her Southern restaurant in North Hollywood and was able to negotiate with her landlord. When she shut down in March, her landlord didn’t ask for the rent. He requested that they reconvene once they both had a better understanding of the situation. She wasn’t able to pay any money in April or May but cut her landlord a check after receiving PPP money in June.


When the restaurant reopened, Corbitt found that she was making only enough money to pay half the rent.

“I reached out to him and told him that we were not making enough revenue to pay the rent and the employees but that we wanted to stay open, hoping this will pass,” she said. “He told us that when things get back to normal we can sit down and come up with something that works for both of us. As a business owner, the only thing to do is to continue to work together and be fair.”

Some restaurants have tried to negotiate with landlords, pushed for rent abatement or percentage rent, and are still looking for a solution. Attorney Alexandra L. Foote says restaurant and bar owners should revisit their insurance policy.

Foote is working locally with Citrin, A.O.C., Tavern, Tilda and The Den on Sunset to file claims for business interruption insurance coverage for losses due to the government-mandated shutdowns. These shutdowns, Foote argues, “are a covered peril under policies that should have paid business expenses during the closures, including rent and payroll.”

“For a tenant, it’s critical that they tender their claim and that they contact their insurance company to submit for coverage for business interruption,” she said. “Make sure you let your landlord know you did that. It shows the landlord you’re not just not paying the rent, you’re doing everything you can.”

Foote has teamed with Lieff, Cabraser, Heimann & Bernstein LLP to help restaurants obtain certified copies of their complete policies to review, submit claims and file both individual actions on behalf of restaurants and some class actions as well. She and the larger firm are working on contingency.

According to the University of Pennsylvania Carey Law School Covid Coverage Litigation Tracker, more than 400 food businesses have filed business interruption lawsuits in the U.S., with a peak of more than 75 cases filed in a single week in May.

While there have been no rulings on any of Foote’s cases yet, some federal courts in California and Texas have ruled in favor of insurance companies. Foote said she’s aware of these rulings, but she isn’t deterred. She expects many of the early rulings will result in writs or appeals that will end up in the California Supreme Court.

“We expected at the outset that these cases would be hard-fought and that there would be some negative rulings along the way,” she said. “It will likely take some time before we have a final or definitive determination as to whether the insurance policies our clients paid for are worth more than the paper they are written on.”

Sironix raises $1.8M to ramp up production of its plant-based, eco-friendly cleaning chemicals 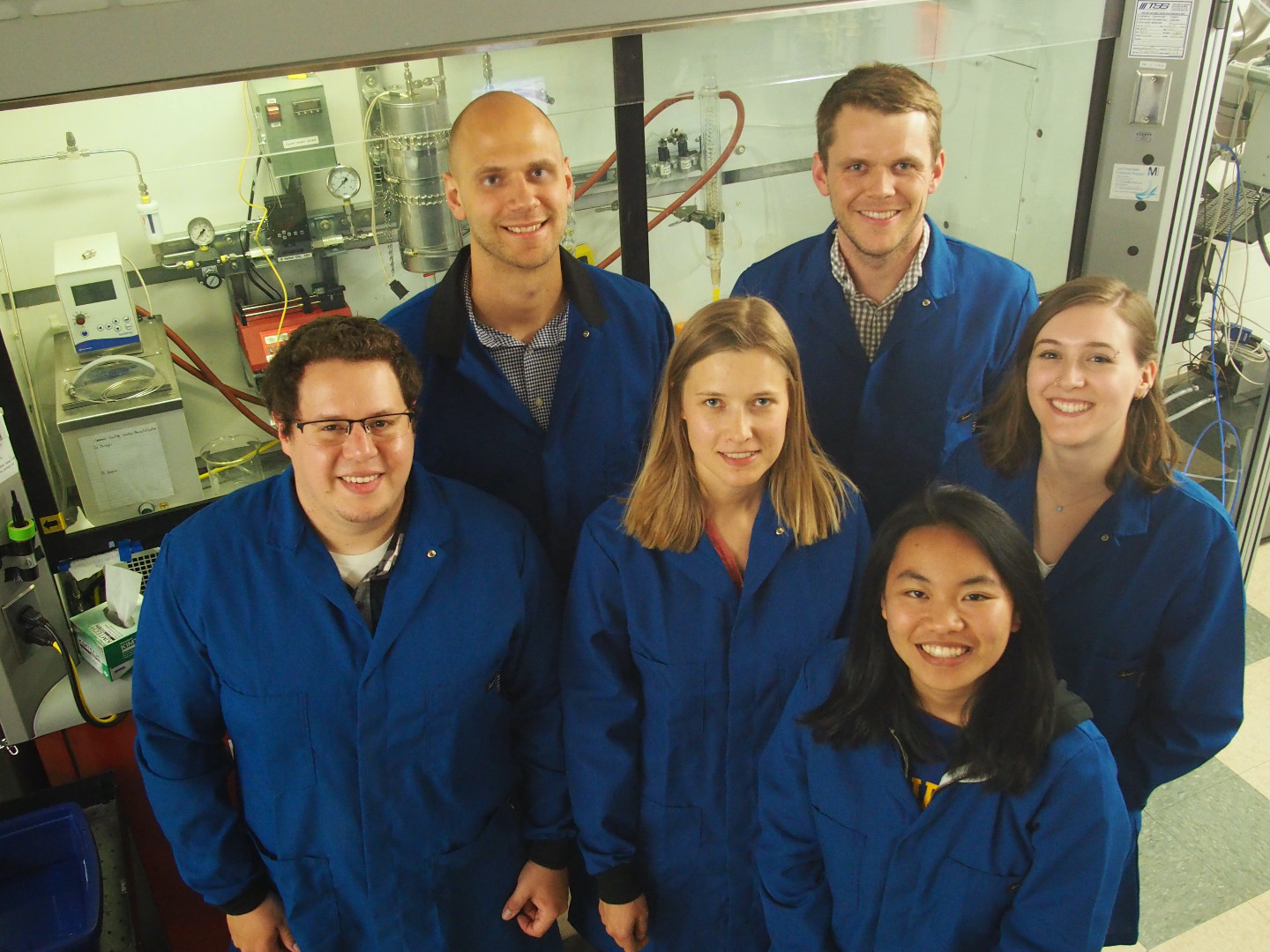