Volatility in emerging market currencies will not let up in the next six months as U.S. presidential election jitters mount and domestic economic growth tapers off, a Reuters poll of market strategists showed.

Most emerging market currencies were forecast to weaken or at best cling to a range over the next three to six months but will rise about 2% on average in a year, supported by a weaker dollar, the Sept. 28-Oct. 5 poll found.

Reuters surveys since the global shutdown in activity in March have been consistently concluding emerging market currencies will not recoup even half their coronavirus-induced 2020 losses within a year.

Still, a steep dollar selloff, which just posted its worst quarter in three years as expectations for a swift recovery from the COVID-19 recession made investors exit safe havens, has helped currencies in less developed countries rise. That comes despite deep economic troubles from the pandemic.

Volatility in emerging market currencies will not let up in the next six months as U.S. presidential election jitters mount and domestic economic growth tapers off, a Reuters poll of market strategists showed. (iStock)

“EM currencies are running on empty without capital inflows or a resounding macro narrative. The large output gap and lower level of economic activity will have a disproportionately negative impact on currencies,” said Jason Daw, head of emerging markets strategy at Societe Generale.

“EM FX has tended to weaken in the lead up to and for several months after a challenger victory in the contest for the White House. A Democratic sweep, our central scenario, could result in weaker EM currencies.”

A Reuters/Ipsos poll on Sunday found 51% of voters were backing Democrat Joe Biden while 41% said they were voting for President Donald Trump.

The Chinese yuan CNY=CFXS, the most actively traded emerging market currency but also tightly managed by its local authorities, was predicted to edge up about 1% to 6.70 per dollar in a year from now.

“We expect CNY to continue to gain ground against a backdrop of broad USD weakness and a favourable external balance. However, in the near term, the upcoming U.S. presidential election on Nov. 3 is a key event risk,” said Irene Cheung, senior strategist at ANZ.

“We however see the risk of volatility in the coming weeks … Any delay in or contest of the U.S. election result could see a prolonged period of uncertainty.”

CLICK HERE TO GET FOX BUSINESS ON THE GO

All but one of 68 FX strategists who answered an additional question said already-high volatility in emerging market currencies would increase rapidly or remain the same over coming months.

South Africa’s rand ZAR=D3, which has been on a rollercoaster ride since April, is expected to gain nearly 0.5% to 16.5 per dollar in 12 months. The rand’s appeal has been enhanced by the lack of alternative high-yielding currencies as growing geopolitical risks diminished the appetite for assets in Turkey and Russia.

The increase in forward volatility in the rouble RUB= and lira TRY= is more pronounced for key events and dates that occur later in the election process, Barclays wrote in a note to clients.

“The move is consistent with a lower likelihood of a contested and delayed result, but resulting in outsized moves in the rouble and lira as the race, according to prediction markets, has moved in favour of Biden in recent days.”

Turkey’s lira TRY= slumped to a record low last month and Russia’s rouble RUB= returned to levels last seen in March on fears the countries would get dragged into military conflict in the South Caucasus.

But the Russian rouble, which has lost over 25% of its value against the dollar this year will gain over 9.0% to 71.0 per dollar by this time next year.

“Apprehensions around potential new international sanctions and the uncertainties related to the U.S. elections may keep the rouble on the defensive with higher volatility likely until the end of the year,” said Lee Hardman, currency analyst at MUFG.

Tue Oct 6 , 2020
Note: All the charts displayed below are updated daily/weekly and available for our subscribers. US COVID-19 and Economic Mobility Since the peak daily US infection rate of over 75,000 achieved on 17 July 2020, daily new infections fell consistently to a trough of just over 20,000 on 8 September 2020. […] 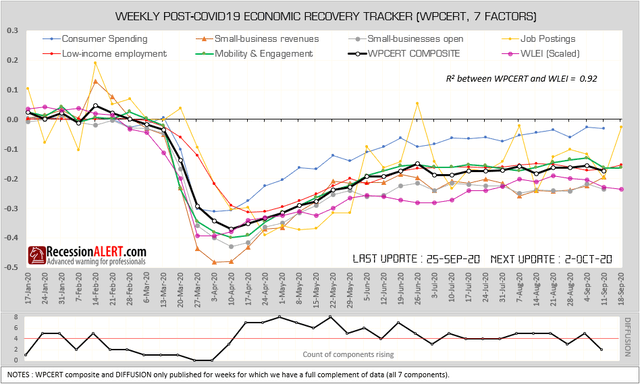