(For a live blog on the U.S. stock market, click or type LIVE/ in a news window) * Apple gains ahead of expected new iPhone launch * Amazon rises as two-day ‘Prime’ shopping event gets underway * JPMorgan, Citigroup, BlackRock rise after results * Disney jumps as it turns around […]

(For a live blog on the U.S. stock market, click or type LIVE/ in a news window)

* Disney jumps as it turns around its media business

Oct 13 (Reuters) – Futures tied to the Dow and the S&P 500 dipped on Tuesday as investors waited for more information from Johnson & Johnson after it paused its COVID-19 vaccine trials, although upbeat quarterly reports from some of the big U.S. banks capped losses.

Johnson & Johnson raised its annual profit forecast, but its shares still dropped 1.2% in premarket trading as an unexplained illness in its COVID-19 vaccine study participant caused it to suspend clinical trials, delaying high-profile efforts to contain the global pandemic.

“It reminds those betting on a vaccine that it’s probably not as clear cut that it’s just on the horizon as the administration makes it to be,” said Rick Meckler, a partner at Cherry Lane Investments, a family investment office in New Vernon, New Jersey.

A rally in technology heavyweights and hopes of more U.S. fiscal stimulus led Wall Street’s main indexes higher on Monday, putting the benchmark S&P 500 and the tech-heavy Nasdaq within striking distance of their record highs hit in September.

Apple Inc rose 1.6% ahead of a virtual event later in the day where it is widely expected to unveil four new iPhones.

Shares of Amazon.com Inc, which have already surged 86% this year, added another 1.3% as it began 48 hours of promotions as part of “Prime Day” in an early start to the holiday shopping season.

Bank stocks, on the other hand, have widely underperformed the broader market in 2020 and analysts expect the sector’s earnings to take years to make a full recovery as interest rates remain near record lows.

JPMorgan Chase & Co rose 1.8% and Citigroup gained 2.4% as both lenders surpassed analyst estimates for third-quarter profit, setting an upbeat tone for the quarterly performance of big U.S. lenders scheduled to report this week.

Overall, analysts expect third-quarter earnings for S&P 500 firms to slide 20.7% from a year earlier, smaller than a 31% tumble in the prior quarter.

Walt Disney Co jumped 4.2% as it restructured its media and entertainment businesses to accelerate growth of Disney+ and other streaming services.

Wed Oct 14 , 2020
The Global Corporate Purchasing Cards market will register an incremental spend of about $232 billion, growing at a CAGR of 8.92% during the five-year forecast period. A targeted strategic approach to Global Corporate Purchasing Cards sourcing can unlock several opportunities for buyers. This report also offers market impact and new […] 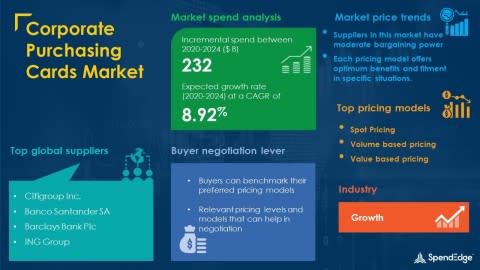