Encouraging economic data boosted US stocks on Tuesday as investors bet on a recovery from the worst effects of the pandemic. The blue-chip S&P 500 index climbed 0.5 per cent while the tech-heavy Nasdaq Composite rose 1.2 per cent. Tesla and Netflix were up 7 per cent and 4 per […]

Encouraging economic data boosted US stocks on Tuesday as investors bet on a recovery from the worst effects of the pandemic.

The blue-chip S&P 500 index climbed 0.5 per cent while the tech-heavy Nasdaq Composite rose 1.2 per cent. Tesla and Netflix were up 7 per cent and 4 per cent respectively. Oracle ended the day 2.5 per cent higher, buoyed by positive signs that its plan to acquire a stake in TikTok would proceed. The worst performer among blue-chips was the cruise operator Carnival — which has been hard hit by the pandemic. The company’s shares sank 10.8 per cent after it said expected losses for the three months ending August 31 totalled $2.9bn.

The moves came as the Federal Reserve began a two-day meeting, which investors will be closely watching for renewed stimulus measures and longer-term economic forecasts.

Earlier on Tuesday, China’s currency hit its highest level in more than a year as a rise in retail sales signalled that a recovery in the world’s second-biggest economy may be taking hold.

The renminbi strengthened as much as 0.44 per cent to Rmb6.7124 to the US dollar in trading within mainland China, its firmest level since May last year. Retail spending increased for the first time this year, by 0.5 per cent in August compared with a year ago.

“A tightening labour market and revival in consumer confidence suggests that the recovery in services activity has further to run,” said Julian Evans-Pritchard, senior China economist at Capital Economics.

Ken Cheung, a strategist at Mizuho Bank, said the renminbi had also been boosted by hopes of improved relations between Beijing and Washington following signs of a deal on the future of the popular Chinese-owned video-sharing app TikTok.

More positive data came from the Federal Reserve Bank of New York, which published a manufacturing survey showing activity that beat forecasts. The headline general business conditions index climbed 13 points to 17 in September, compared to expectations of 6, according to a Reuters poll, while new orders increased.

The dollar index, which compares the US currency against a basket of other major currencies, recovered to trade flat after slipping 0.2 per cent earlier in the day, ahead of the Fed meeting.

“We remain negative on the dollar, as [Fed chairman Jay] Powell’s dovish message from Jackson Hole is likely to be reiterated at the FOMC meeting this week,” said Win Thin, global head of currency strategy at Brown Brothers Harriman. “Sequentially weaker US data this week should also fit into the weak dollar narrative.”

In Europe markets showed some buoyancy on the China data and on positive financial results from consumer groups including the clothing retailer H&M and the grocer Ocado.

In Germany investor sentiment about the future of the economy surged to its highest level for more than 20 years, substantially beating expectations, although respondents remained strongly negative about current conditions, the Zew survey of financial market experts revealed on Tuesday. 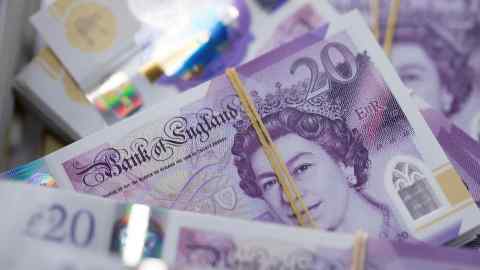 But the UK unemployment rate rose to 4.1 per cent in the three months to July. Samuel Tombs, chief UK economist at Pantheon Macroeconomics, said he expected payroll numbers to “fall much further in September” as the government’s support scheme winds down, and unemployment to peak at 8 per cent in the winter.

In the Asia-Pacific region, Japan’s Topix index closed down 0.6 per cent and Australia’s S&P/ASX 200 slipped 0.1 per cent. The CSI 300 index of Shanghai and Shenzhen-listed shares reversed initial losses to rise 0.8 per cent, while Hong Kong’s Hang Seng index added 0.4 per cent.

In addition to the outcome of the Fed meeting, investors are looking ahead to decisions this week by central banks including the Bank of Japan and the Bank of England.

Why is Apple bundling its subscription services?

Wed Sep 16 , 2020
Apple on Tuesday said it will sell bundles of its subscription services including music and TV this fall as it faces mounting competition from rivals to lure and retain customers. © Provided by The LA Times Reese Witherspoon and Jennifer Aniston in “The Morning Show” on video streaming service Apple […]