(RTTNews) – Following the sharp pullback seen late in the previous session, stocks saw some further downside during trading on Thursday. The major averages all moved lower on the day, with the tech-heavy Nasdaq posting a particularly steep loss. The major averages ended the session off their worst levels of […]

(RTTNews) – Following the sharp pullback seen late in the previous session, stocks saw some further downside during trading on Thursday. The major averages all moved lower on the day, with the tech-heavy Nasdaq posting a particularly steep loss.

The weakness on Wall Street came as stocks extended the sell-off seen on Wednesday after the Federal Reserve revealed plans to leave interest rates at near-zero levels for years to come.

The Fed’s dovish monetary policy announcement was expected to help calm the markets, although investors seem to be viewing the central bank’s projections as a sign the economic recovery will not be as swift as many were hoping.

In his post-meeting press conference, Fed Chair Jerome Powell cautioned that the pace of the recovery is expected to slow and called for fiscal stimulus from Congress.

However, lawmakers have remained at an impasse over a new coronavirus stimulus bill for weeks, and the upcoming elections could make reaching a compromise more difficult.

Negative sentiment was also generated in reaction to a report from the Labor Department showing first-time claims for U.S. unemployment benefits fell less than expected in the week ended September 12th.

Economists had expected jobless claims to dip to 850,000 from the 884,000 originally reported for the previous week.

The Commerce Department also released a report showing new residential construction pulled back by much more than expected in the month of August.

Economists had expected housing starts to pullback by 1.2 percent to a rate of 1.478 million from the 1.496 million originally reported for the previous month.

Building permits, an indicator of future housing demand, had been expected to increase by 1.7 percent to a rate of 1.520 million from the 1.495 million originally reported for the previous month.

A separate report from the Federal Reserve Bank of Philadelphia showed a modest slowdown in the pace of growth in regional manufacturing activity.

Significant weakness was also visible among gold stocks, as reflected by the 1.7 percent drop by the NYSE Arca Gold Bugs Index

The weakness in the gold sector came amid a sharp decline by the price of the precious metal, with gold for December delivery plunging $20.60 to $1,949.90 an ounce.

Airline stocks also saw considerable weakness on the day, resulting in a 1.7 percent slump by the NYSE Arca Airline Index. The index ended the previous session at its best closing level in over three months.

Retail, tobacco, and telecom stocks also showed notable moves to the downside on the day, while steel stocks bucked the downtrend.

The major European markets also moved to the downside on the day. While the French CAC 40 Index slid by 0.7 percent, the U.K.’s FTSE 100 Index and the German DAX Index dipped by 0.5 percent and 0.4 percent, respectively.

In the bond market, treasuries pulled back near the unchanged line after seeing early strength. As a result, the yield on the benchmark ten-year note, which moves opposite of its price, edged down by less than a basis point to 0.684 percent.

The economic calendar is relatively quiet on Friday following today’s batch of data, although a report on consumer sentiment in September may still attract some attention.

Sun Sep 20 , 2020
Technavio has been monitoring the copper sulfate market and it is poised to grow by 81.03 K MT during 2020-2024, progressing at a CAGR of almost 5% during the forecast period. The report offers an up-to-date analysis regarding the current market scenario, latest trends and drivers, and the overall market […] 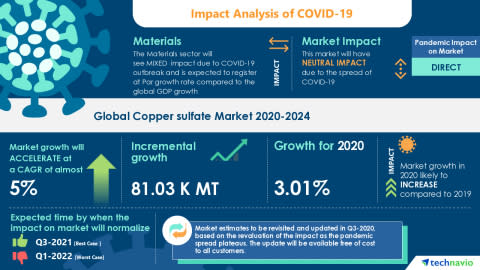