(Bloomberg) — Researchers monitoring Pfizer Inc.’s vaccine trial have reported no safety problems even after more than 12,000 people received their second of two doses. JPMorgan Chase & Co. sent some of its Manhattan workers home after an employee in equities trading tested positive.

Joe Biden’s advisers are developing plans to distribute a coronavirus vaccine if he were to be elected president as his campaign monitors the Trump administration’s effort to deliver a drug for signs of political interference.

A U.K. court ruling in a landmark insurance case could lead to tens of millions of payouts related to Covid-19. Britain’s finance minister hinted at more wage help as fresh data showed total job losses during the crisis reaching almost 700,000. The government also acknowledged that its testing program is coming under strain.

Subscribe to a daily update on the virus from Bloomberg’s Prognosis team here. Click CVID on the terminal for global data on coronavirus cases and deaths.

Coronavirus cases in the U.S. increased 0.7% as compared with the same time Monday to 6.59 million, according to data collected by Johns Hopkins University and Bloomberg News. The increase was in line with the average daily gain of 0.6% over the past week. Deaths rose by 0.5% to 195,275.

California continued to show improvement in its outbreak, with the 14-day average rate of positive tests falling to 3.6%, the lowest in state health data going back to April. The state reported 2,235 new virus cases, a 0.3% increase and less than the 14-day average of 3,730. A month ago, cases were averaging more than 7,000 per day.

The state reported 66 additional deaths from Covid-19, bringing the total to 14,451.

Researchers monitoring Pfizer Inc.’s giant trial of an experimental Covid-19 vaccine have reported no safety problems even after more than 12,000 people received their second of two doses. The trial, now targeted at enrolling 44,000 people, has reached its initial goal of 30,000 subjects, Pfizer executives said. The trial is comparing two shots of the vaccine Pfizer is co-developing with Germany’s BioNTech SE to two doses of a placebo.

Houston-area hospitals reported their lowest positivity rate since at least April, according to the Texas Medical Center. The rate averaged 4.6% during the week ended Sept. 13, lower than any period in data going back to April 20 on the center’s website.

The positive-test ratio has been steadily falling in the fourth-largest U.S. city since July 5, when it peaked at 22.3%, medical center data showed.

Meanwhile, hospitals in the nine-county Houston metro area sheltered 218 Covid-9 patients at the start of the week, the smallest number since mid-May, according to the SouthEast Texas Regional Advisory Council. Virus cases accounted for about 13% of intensive-care occupancies.

Florida reported 668,846 Covid-19 cases Tuesday, up 0.5% from a day earlier, compared with an average 0.4% increase in the previous seven days. That’s a daily change of 3,116 new cases, according to the health department report, which includes data through Monday.

The new daily rate of people testing positive for the first time rose to 4.2% for Monday, from 3.9% on Sunday. It was under 5% for the fourth straight day.

Deaths reached 12,787, an increase of 1.1%, or 145. Deaths often trail infections by weeks, and generally take even longer to be reflected in the data.

The Irish government cabinet is self-isolating after Health Minister Stephen Donnelly had to be tested for the coronavirus, Virgin Media reported.

AstraZeneca Plc and the University of Oxford have restarted testing an experimental Covid-19 vaccine in South Africa, according to a researcher overseeing the trial, but tests remain on hold in the U.S. after studies were halted due to concerns about a participant who became ill.

The trial in South Africa resumed Tuesday, according to Shabir Madhi, a professor at the University of the Witwatersrand who is leading the study. The move follows a recommendation in the U.K. to resume tests.

A total of 8,265 new coronavirus cases were confirmed in the Netherlands in the past week, up from the 5,427 cases reported in the seven days before that, the RIVM Dutch National Institute for Public Health and the Environment said on Tuesday. In the same period, 27 confirmed Covid-19 patients died. The latest update on cases came after Dutch Finance Minister Wopke Hoekstra earlier on Tuesday presented the government budget for 2021, with the outbreak heavily affecting state finances as a result of lower tax income and billions in euros in state aid.

Boris Johnson’s government closed a coronavirus testing facility so the site can be made available to handle customs checks after the U.K. leaves the European Union’s single market and customs union.

“The regional testing site at Ebbsfleet has ceased operations,” the Cabinet Office said in a statement. “Final decisions on inland sites will not be made until we have established the extent of new infrastructure that will be delivered at ports.”

The relocation of the facility, to a new site at Rochester, about 10 miles (16 kilometers) to the east, comes at a critical time for the government, which has faced shortages in its virus testing as new cases surge.

Starting next month, Swedes will be able to visit elderly care homes for the first time since April as the spread of Covid infections continues to slow down. State epidemiologist Anders Tegnell described the move as “completely reasonable since transmission has decreased radically recently, and it’s obvious that knowledge and routines have improved greatly.”

Bars, restaurants and cafes in Denmark’s capital will have to shut at 10 p.m. and customers will need to wear face masks, according to new restrictions being introduced following a fresh spike in coronavirus cases. The tightening will take place from Thursday and will apply for two weeks.

In Dublin, bars that don’t serve food will remain closed, the government said on Tuesday as additional restrictions were laid out. So-called wet bars will be able to reopen elsewhere in the country later this month. In addition, Dubliners shouldn’t have visitors from more than one home come to their houses.

Abivax SA, the French biotech embarking on tests of its lead experimental medicine for Covid-19, has turned away several suitors in recent months, according to its chairman. The company is in the process of recruiting more than 1,000 patients to test whether a drug it’s developing for inflammatory bowel diseases can also stifle a powerful overreaction of the immune system known as a cytokine storm that comes with the most severe coronavirus cases.

Siemens Healthineers AG has joined U.S. and European health officials to create an international standard for coronavirus antibody tests, a key step toward knowing who needs a future vaccine or booster shot.

The effort aims to establish a unit of measurement for the level of protection someone has built up against the deadly virus. The project from Healthineers, the U.S. Centers for Disease Control and Prevention and the European Commission’s Joint Research Centre will probably take a matter of “weeks, not months,” Deepak Nath, president of laboratory diagnostics at Healthineers, said in an interview.

Lawyers for policyholders in a landmark U.K. insurance case over payouts related to Covid-19 called the ruling a “resounding victory” for their clients. The Financial Conduct Authority said insurers should be begin progressing claims in light of the ruling from a pair of London judges on Tuesday.

Shares in Hiscox Ltd. and RSA Insurance Group Plc gained after the companies responded to the ruling, providing estimates of the impact. The insurers, together with Zurich Insurance Group AG and five other companies, had objected to the FCA case, which was brought in an effort to bring legal clarity to dozens of policies under dispute.

BioNTech SE will get as much as 375 million euros ($445 million) from Germany to back its Covid-19 program, about half of the money the government set aside to accelerate development of a vaccine.

The German biotech company is working with Pfizer Inc. and Shanghai Fosun Pharmaceutical Group Co. on what is expected to be one of the first vaccines to deliver results from late-stage trials. Pfizer has repeatedly said data from a U.S. study could be ready next month.

The number of new cases in Iran climbed for a second day to 2,705, the highest in six weeks, taking the total to 407,353. The death toll reached 23,453 with 140 more fatalities, down from a four-week high of 156 the previous day, Health Ministry data showed.

At least two Iranian members of parliament have gone into quarantine after testing positive, the semi-official Tasnim news agency reported.

Freeport does not want to be 'distracted' by buyout offers, CFO says

Tue Sep 15 , 2020
FILE PHOTO: Vehicles used for transporting workers to the Grasberg copper mine operated by Freeport McMoRan Inc are seen at the Gorong-Gorong terminal in Timika, Mimika, Papua province, Indonesia on November 16, 2017. REUTERS/Muhammad Yamin (Reuters) – Freeport-McMoRan Inc does not want to be distracted by any buyout offers and […] 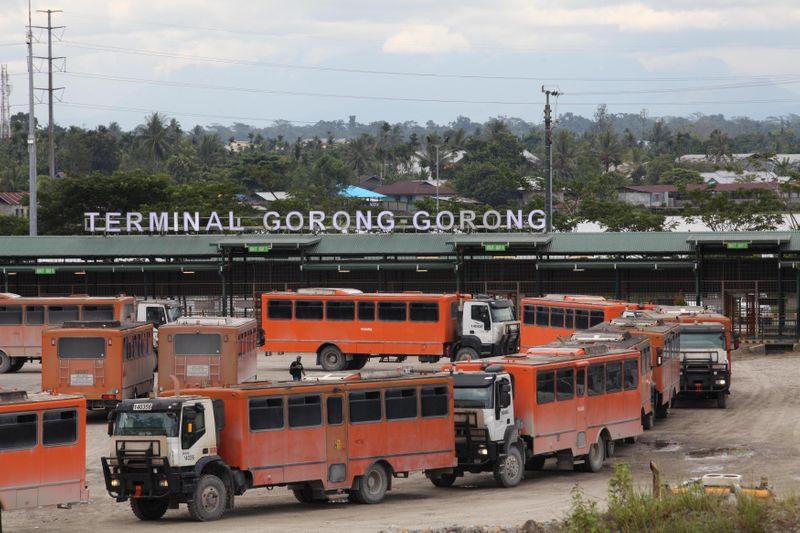