An explosive interview with Saudi Prince Bandar bin Sultan on Saudi-owned Al Arabiya has made the Kingdom’s position on the Palestinians murkier than it has been in the six weeks since the United Arab Emirates and Israel announced they were normalizing ties.In the aftermath of the peace agreement, the Palestinians […]

An explosive interview with Saudi Prince Bandar bin Sultan on Saudi-owned Al Arabiya has made the Kingdom’s position on the Palestinians murkier than it has been in the six weeks since the United Arab Emirates and Israel announced they were normalizing ties.In the aftermath of the peace agreement, the Palestinians let the world know that they are furious and feel betrayed. Palestinian Authority President Mahmoud Abbas called normalization a “stab in the back of the Palestinian people,” though he later apologized at the UAE’s demand.But the Palestinian leadership could take some comfort in the fact that, while Saudi Arabia signed off on the UAE and Bahrain’s peace with Israel, to some extent, the Kingdom had not moved away from its traditional support for the Palestinian cause. Saudi officials still professed adherence to the Arab Peace Plan, which is predicated on the idea that Arab states would only make peace with Israel after the conflict with the Palestinians is resolved – on terms Israel does not consider to be fair.The Arab Peace Plan “ensures the fraternal Palestinian people would regain their legitimate rights establishing independent statehood with east Jerusalem as its capital,” Saudi King Salman bin Abdulaziz al-Saud said in his speech to the UN General Assembly last month. The king also snubbed the UAE and Bahrain’s peacemaking in his speech, which seemed to reflect a general lack of enthusiasm for the move.Many Saudi-watchers interpreted the situation in the Kingdom as a generational gap. The narrative that appeared in The New York Times, the Associated Press, the Wall Street Journal and other major news outlets in recent weeks was that Crown Prince Mohammed bin Salman would prefer to normalize relations with Israel, because, like the leaders in the UAE and Bahrain, he emphasizes the potential for security and economic ties, as opposed to past grievances. King Salman, however, still feels attached to the Palestinian cause and the Arab Peace Plan that he authored. Plus, as the custodian of Mecca and Medina, the king is wary of angering the Muslim world and sparking the ire of jihadists. The Palestinians followed this narrative, as well.And while the gap between the Saudi king and crown price seems to be real, the interview with Prince Bandar indicates that a bit of nuance needs to be brought into these analyses.Prince Bandar’s scathing criticism of the Palestinians wasn’t a candid moment. On Monday night, Saudi-owned Al Arabiya aired a 40-minute interview – part one of three – with multiple camera angles, and archival materials added in.It would be hard to believe that King Salman didn’t know that someone who had been a senior government official – ambassador to the US for over 20 years, and then head of Saudi intelligence until 2014 – would be speaking out on the regime-run TV station. The Saudi powers that knew what the prince said, and chose to highlight it, not hide it.And what Prince Bandar said was a 40-minute indictment of the Palestinian leadership in Gaza and Ramallah.The Palestinians’ rage at peace between Gulf states and Israel was “reprehensible,” a “transgression” and “entirely unacceptable,” he said.Prince Bandar gave a historic overview of the Palestinian leadership’s follies, saying: “The Palestinian cause is a just cause, but its advocates are failures. The Israeli cause is unjust, but its advocates are successful. That sums up the events of the last 70 or 75 years.”He went back to the Arab leader in Mandatory Palestine, Hajj Amin al-Husseini, who supported the Nazis, meeting with Hitler and supporting the genocide of the Jews of Europe, whipped up riots against the Jews in what is now Israel, in Iraq and elsewhere, and led the failed, bloody Arab Revolt against the British.PLO leader Yasser Arafat also chose the wrong allies, the prince said, undermining the leadership of Jordan and Lebanon over the decades, and supporting Saddam Hussein during the 1990 Gulf War.And today, the Palestinians have sought out Turkey and Iran, which the prince also criticized.Even more surprising was Prince Bandar arguing that the Palestinian leadership has been as bad for its people as Israel. He slammed Hamas and the Palestinian Authority’s inability to work together.Prince Bandar painted the Palestinians as ingrates. He recounted Saudi Arabian efforts to help Palestinians going as far back as 1945, advocating for their cause to US President Franklin Delano Roosevelt.”Whenever [the Palestinians] asked for advice and help, [Saudi Arabia] would provide without expecting anything in return, but they would take the help that we provide and ignore the advice,” the Saudi prince said, with “help” referring to material support.The Al Arabiya write-up of the interview featured a line quoting Saudi Arabia’s Foreign Minister Faisal bin Farhan as saying the stance on the Palestinian cause is “firm” and “will not change.” But that’s one line in a litany of complaints.The interview shows a sharp shift in moderate Arab states’ leadership against Ramallah, and could very well be the opening salvo in a campaign by the Saudis against the PA.What’s certain, following Prince Bandar’s interview, is the Palestinians can no longer view the Saudis as their salvation after Israel’s peace with the UAE and Bahrain has shifted the paradigms of the Middle East.
Next Post

Tue Oct 6 , 2020
There were some notable incomings and outgoings at Arsenal Transfer deadline day. It comes around so fast. We’ve had homecomings, sad farewells and Turkish delicacies. Here’s a (by no means exhaustive) round-up… Partey time for Arsenal Thomas Partey arrived at Arsenal fashionably late in the window. The 27-year-old midfielder’s signing […] 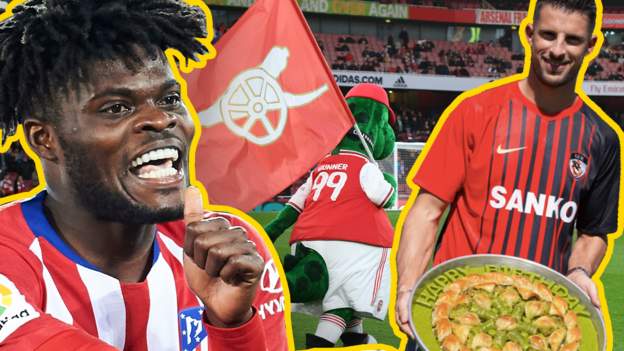