You’ve heard the claims. Hydroxychloroquine is a miracle cure for the COVID-19 virus. Wearing a mask is bad for you. Vaccines cause autism. Left-wing arsonists are responsible for the fires in California. The internet is full of misinformation — that is, inaccurate statements — including the sinister, intentionally misleading subset […]

You’ve heard the claims. Hydroxychloroquine is a miracle cure for the COVID-19 virus. Wearing a mask is bad for you. Vaccines cause autism. Left-wing arsonists are responsible for the fires in California.

The internet is full of misinformation — that is, inaccurate statements — including the sinister, intentionally misleading subset known as disinformation. Both are spreading, a contagion that imperils society just as surely as the coronavirus itself. Those who spread it run the gamut of society; a new study by Cornell University researchers concludes that President Trump has been the leading source of COVID-19 misinformation reported by news media, who often repeat the information “without question or correction.”

Swire-Thompson spoke with Knowable Magazine about what we can learn from taking an epidemiological approach to misinformation. This conversation has been edited for length and clarity.

What do you mean by an epidemiological approach to misinformation?

The epidemiological approach is really just looking at how and why information spreads between people in a network. That’s very different from the individual approach that I’m used to in the experimental world, where you manipulate various conditions and see what the outcome is. Ideally, you need both.

Where does most online misinformation spread?

Much of this research is yet to be done. At the moment, a lot of the academic research on misinformation and disinformation is done using Twitter. It’s easier, because there’s more data-sharing between Twitter and the academic community than for other platforms like Facebook or Instagram. It’s also easier because of issues around privacy. When you tweet, you put it out there in public. But social media like Facebook and WhatsApp are private, so access is more complicated, as it should be with privacy concerns. It means that less research has been done on a lot of these platforms.

What do you know so far about who spreads misinformation?

One study by other researchers found that older adults — people over the age of 65 — are seven times more likely to share fake news as people 18 to 29. So older adults could potentially be spreading misinformation more often. We found the same trend in our own studies of fake news during the 2016 U.S. election. We did see, too, that people who are very politically engaged are more likely to view and share political fake news.

But it’s a big problem that a lot of these studies have been done exclusively with political misinformation. We don’t know if that generalizes to other subjects like health. Health misinformation is very understudied.

The really surprising finding with our study, though, was the concentration. We had a sample of 16,000 people, and found that there were 16 individuals sharing 80 percent of the fake news, which is extraordinary. They’re superspreaders, just like with COVID-19. They were tweeting 71 times per day as compared to the median person, who tweeted 0.1 times per day. We assume they had automation tools that helped them retweet or reshare content.

That suggests those people are very important in the misinformation ecosystem. What do we know about them?

Very little. Twelve of them were females, but that is something I don’t believe will replicate in a larger sample. This is the big problem: You can’t really say much from only 16 individuals. We’re hopefully going to look at this with a much larger sample, and then we can make some generalizations about basic demographics like their age and political orientation.

What about bots? Are they doing most of the spreading, or is it coming from real people?

In our study, we linked voter registration data to Twitter handles to be sure they are real people. But even if bots are tweeting some of the misinformation, the question is, what influence are they having on real people? It’s unlikely that they have as much impact on people’s beliefs as some think, because they’re not as embedded in human social networks. Also, the trustworthiness of the source is really important, and we’re more likely to believe information from friends and family than from unknown accounts. However, the true impact of bots is still under debate.

What does this tell us about the virality of misinformation?

We often think of virality as one person shares information to another who shares it to another, and so forth. That’s compared to a broadcast where one person or a media outlet with lots of followers shares the information, and it gets very, very popular due to just one broadcast. It still gets seen by many people, but how that happens is different.

One recent paper found it was more likely that information was being broadcast than spread through true virality. That’s an interesting study, because it shows that people who have large numbers of followers probably have more responsibility to be sure that what they share is accurate. But that study was done with information in general, not misinformation.

A different paper found that false information spread faster, further, and deeper than true information — but this was observational, not experimental, so we still don’t know why. The authors proposed that it was due to the information being novel and inspiring fear, disgust, and surprise. It had this emotional component, they proposed, that was behind the higher spread.

But these are still early days. Surprisingly early days, in this field.

On the other side of the contagion, who is most likely to receive online misinformation?

We found there was a very similar pattern as for sharing. Again, it was older adults. I think that on both the sharing and the exposure end, they could be a group we want to check in on to see if they’re believing this information. They might be fine. People might be, like, “I know that’s false. It’s just funny.” So we should check.

What can we do to reduce the spread of misinformation?

There is a lot that we all can do to reduce the spread of misinformation online. Simple measures like correcting misinformation if we see our friends and family sharing it can go a long way. Also, taking a bit more time to read an article and to consider whether it is true prior to sharing, and being more conscious about who we friend or follow online, can be considered good practice.

Does it help or hurt to correct misinformation?

Scientists used to be concerned about a phenomenon called the backfire effect, where you try and correct the information and it has the opposite effect: People increase their belief instead of reducing it. I think many people became quite afraid of correcting, and they preferred to just let the misinformation sit out there.

People thought the backfire effect was due to two things: One, if the information was connected to people’s sense of identity, when the correction occurred they were more likely to dig in their heels. Two, the effect of information repetition: I have to repeat the misinformation to correct it, and this familiarity makes people think the information is more true.

I’ve done research on both, and we have found there’s very little evidence for either. We haven’t been able to replicate the findings that showed these things, even using the exact same items. And it isn’t just my work. We came to the conclusion that the backfire effect is not widespread. I think it’s now safe to say corrections work.

Even for COVID-19-related misinformation?

It is a bit of a perfect storm these days in the pandemic. In the correction world, the best response we have is to tell people what the true information is. But for COVID-19 we can’t say what is true yet, in many areas, because it takes such a long time for science to establish the facts. It’s like we’re fighting with our hands tied behind our back.

Are there differences in how people respond when misinformation is corrected?

I’ve done only one study on this, looking at whether people in different cultures process information differently. And we found a big difference between people in the U.S. and Australia. We were looking at when misinformation from people’s favored politicians was corrected. In both the U.S. and Australia, people did a great job of decreasing their belief in the misinformation. That was really positive, an encouraging finding.

But while people in the U.S. reduced their belief in the misinformation itself, it didn’t change the way they were going to vote, on the left or the right. In Australia, we found that the correction greatly impacted people’s feelings and their voting intentions toward these political figures. That could be because Australia is less polarized. But the fact that we found a difference in something like that highlights the importance of doing misinformation studies in different locations and on different topics, because I don’t think we know where findings are going to be replicable and where they’re not.

What do we still have to learn?

A lot of these questions — who’s susceptible to misinformation, who’s spreading it and for what reasons, who’s predisposed — have very unsatisfying answers right now. My partner does vision science. I’m always super-jealous, because how people see has been studied for at least a hundred years. For misinformation, we’re still trying to establish the basics, in terms of who and when. But I think these are the exact kind of things we need to know to be able to build this model of epidemiology.

This article originally appeared in Knowable Magazine, an independent journalistic endeavor from Annual Reviews. Sign up for the newsletter.

Leif Erikson Day Vs. Christopher Columbus Day Is Just Another Thing To Fight About On Social Media

Sun Oct 11 , 2020
Today marked “Leif Erikson Day,” which commemorates the “discovery of the New World” by the Norse … [+] explorer from Iceland getty Social media has become the platform to vent, complain and call others horrible names – so the latest round of fighting isn’t about two old white guys running […] 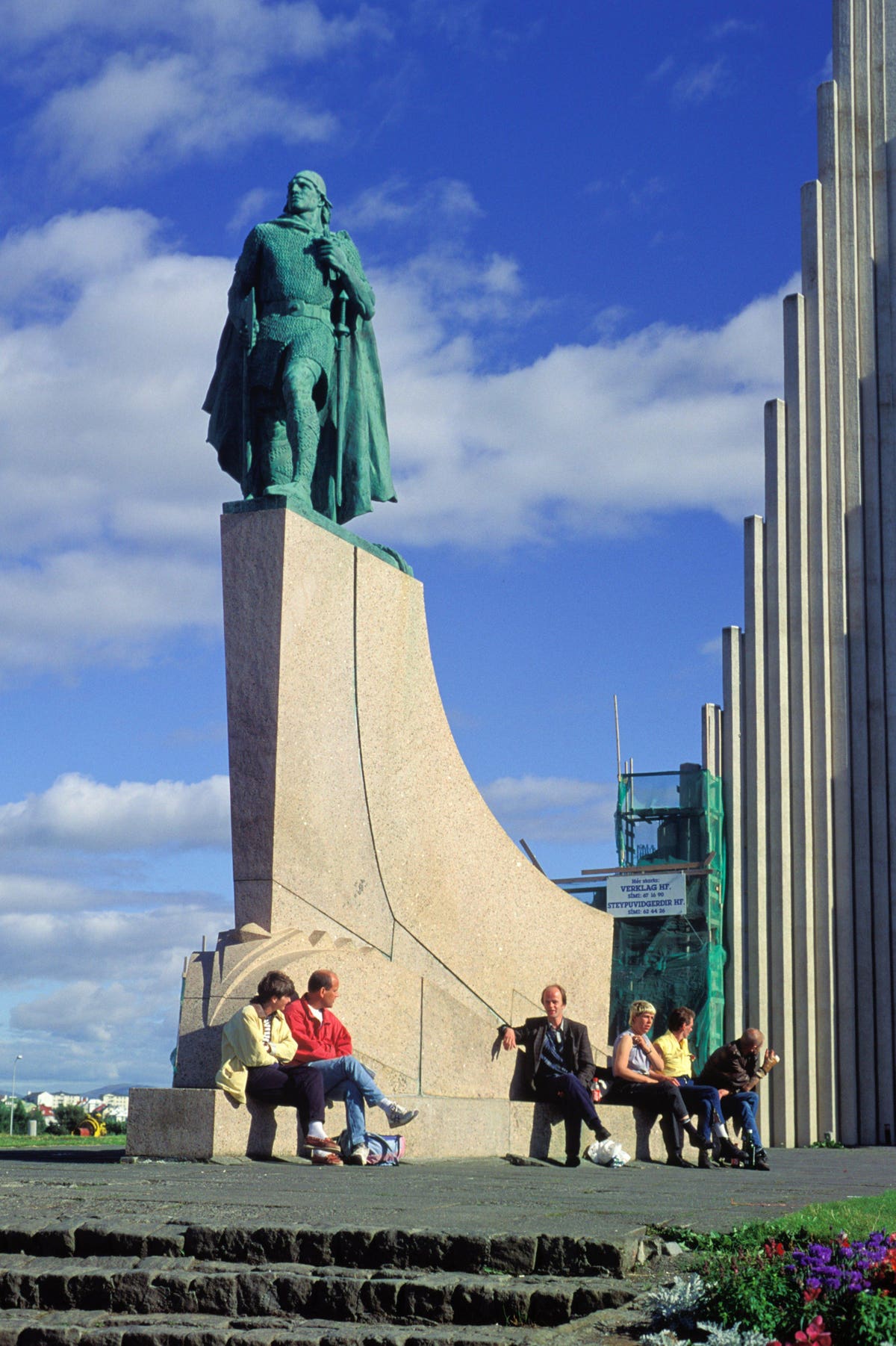