Side view portrait of young woman carrying large blue bar graph against white background getty Okay, it’s finally happened. The U.S. stock market is in correction territory with the major indexes having sold off by 10% or more from their peaks this year. This development is not surprising considering how far […]

Okay, it’s finally happened. The U.S. stock market is in correction territory with the major indexes having sold off by 10% or more from their peaks this year.

This development is not surprising considering how far the market advanced from the lows reached in late March. At the beginning of September, the S&P 500 index and the Nasdaq 100 index were up by 60% and 84%, respectively, with high flying tech stocks leading the advance.

In the wake of this surge, even the most bullish observers recognized that a market pull-back was likely, as the run-up far outpaced earnings and valuations became stretched.

The issue investors now face is whether the pull-back represents a buying opportunity or is the harbinger of more to come. My take is the highs for the stock market have been reached this year, but a full-fledged bear market is unlikely.

The main factor limiting the market’s upside is that considerable favorable news already is priced into the market. First, valuations as measured by one year forward multiples are unusually high.  According to Cornerstone Macro, they are nearly two standard deviations above the long-term average for S&P 500 companies.

Second, Wall Street analysts are calling for a significant recovery in S&P 500 profits in the coming year. They are projected to post a v-shaped rebound next year following a steep decline this year.

The principal factor supporting the market is interest rates are likely to remain close to zero for the foreseeable future. The Federal Reserve recently announced that it will now target an average rate of inflation of 2% over a business cycle. Consequently, if inflation undershoots the target in a year, it will be allowed to overshoot it in subsequent years. Moreover, the Fed will no longer raise interest rates preemptively if unemployment is low.

In this context, several factors could tip the balance up or down.  The most important are the possibilities of a resurgence of the Covid-19 pandemic and uncertainty over the November elections.

The market jitters of late can be traced to worries about a second wave of coronavirus. Following the Labor Day holiday weekend, the incidence of cases in the U.S. has increased and it has delayed school openings in some areas. Europe has also experienced a spike in cases after the situation there appeared under control.

If a renewed outbreak ensues, a lockdown of businesses is highly unlikely. However, it could dampen the economic recovery considering that key provisions of the CARES Act expired at the end of July.

This consideration is an important reason the Federal Reserve has called for Congress to pass legislation to boost federal support. Yet, the gulf between Democrats and Republicans remains wide and may not be reconciled.

While this predicament has added to uncertainty, there is still a cushion to support consumer spending as many households were able to save a portion of the federal support they received. The household saving rate, for example, had spiked to 33% following passage of the CARES Act and it stood at a relatively high level of 17% recently. That said, household spending has slowed this month.

Meanwhile, investors will be turning their attention to the upcoming elections. While polls show Joe Biden maintaining a significant lead over President Trump nationally and a fair chance the Democrats could win the Senate, the election has not a major driver of the stock market thus far. One reason is that investors are well aware of the upset that Trump pulled off in 2016, and they are prepared to await the results this time.

Another reason is Biden’s fiscal program has not alarmed investors, as Bernie Sander’s and Elizabeth Warren’s did. Specifically, Biden’s proposal is estimated by the Penn Wharton Budget Model to increase federal spending by $5.4 trillion over the next ten years. If enacted, it would increase federal spending to 24% of GDP by 2030 from 21% in 2019.

On the personal side, households with adjusted gross income (AGI) of $400,000 or less would not see their taxes increase directly. Those above this threshold (the top 1.5 percent of households) would face an average decrease in after-tax income of 17.7%.

However, there is a greater risk of a stock market sell-off if Biden wins.

One reason is the increase in corporate tax rates is estimated to cut after-tax earnings per share of S&P 500 companies by about 12% according to Goldman Sachs
.  Another consideration is individuals may opt to sell stocks and pay capital gains taxes at the existing rate for capital gains, which is below the rate that the Biden plan proposes.

Finally, the wild card is the possibility that the election results could be contested. In that event, however, any selling is likely to be temporary. Once the results are know, investors will shift their attention to prospective policies of the next administration and the economic outlook for 2021.

Biden will build on his economic populist message in Ohio on Monday.

Wed Oct 14 , 2020
Joseph R. Biden Jr. will continue promoting his economic message to “Build Back Better” in a trip to Ohio on Monday, where he will deliver remarks in Toledo before a visit to Cincinnati. It was a message he pushed over the weekend, swinging through a county in Pennsylvania that voted […] 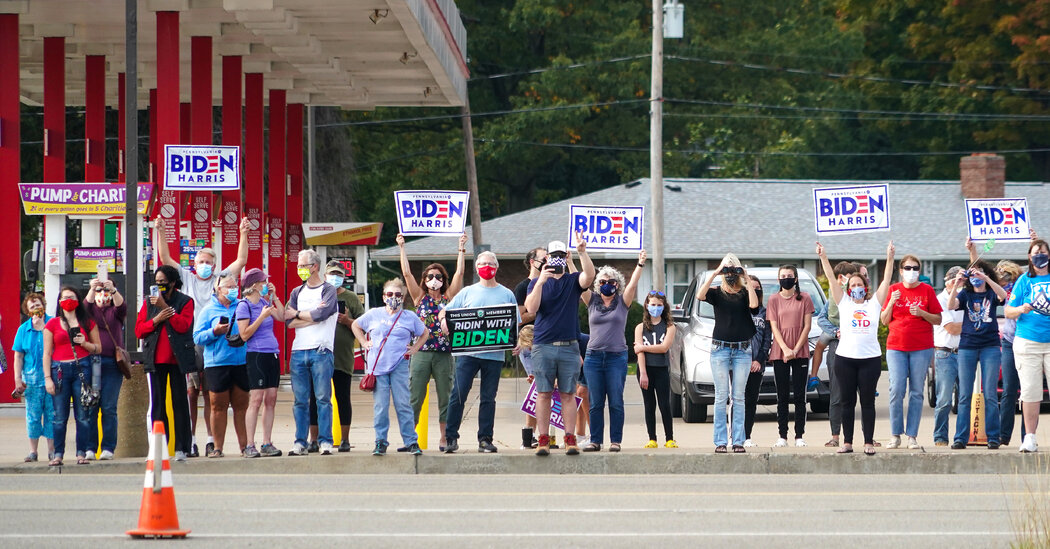