Courtney Watts, of Tuscaloosa, Ala., moves off the beach at Gulf State Park, Tuesday, Sept. 15, 2020, in Gulf Shores, Ala. Hurricane Sally is crawling toward the northern Gulf Coast at just 2 mph, a pace that’s enabling the storm to gather huge amounts of water to eventually dump on […]

Here are the latest developments on tropical weather (all times local):

COLUMBIA, S.C. — South Carolina environmental officials are urging owners and operators of reservoirs across the state to be ready to handle potentially heavy rainfall in the coming days as Hurricane Sally makes landfall and drenches inland areas.

The Department of Health and Environmental Control on Tuesday said the agency had performed “pre-hurricane season assessments of all dams of concern.”

In issuing guidance, Jill Stewart, director of DHEC’s Dam Safety and Stormwater Permitting Division, said owners should also notify anyone operating a dam downstream of their property if they are lowering water levels, and also clear trash and debris from spillways.

In 2015, more than 40 dams across the state failed in devastating floods that stranded homeowners and forced some into recreational boats to rescue neighbors. The historic rain and flooding led to 19 deaths and caused about $2 billion in damage.

A year later, Hurricane Matthew caused about 25 more dams to fail and another round of flooding.

BAYOU LA BATRE, Ala. — Two large casino boats broke loose Tuesday from a dock where they were undergoing construction work in Alabama as Hurricane Sally approached the Gulf Coast.

M.J. Bosarge lives near the Bayou La Batre shipyard and says at least one of the riverboats had done considerable damage to the dock.

“You really want to get them secured because with wind and rain like this, the water is constantly rising,” Bosarge said. “They could end up anywhere. There’s no telling where they could end up.”

Bosarge said this is particularly concerning because there are dozens of shrimp and other commercial fishing boats docked there, including ones his family runs.

“It could cause a lot of damage if something of that caliber got loose and headed this way,” he said.

MONTGOMERY, Ala. — Alabama Gov. Kay Ivey is urging residents near Mobile Bay and low-lying areas near rivers to evacuate if conditions still permit a safe escape from Hurricane Sally.

The National Hurricane Center has predicted storm surge along Alabama’s coast, including Mobile Bay, could reach 7 feet (2.1 meters) above ground. Forecasters have said Sally should reach land near the Alabama-Mississippi state line by late Tuesday or early Wednesday.

“This is not worth risking your life,” Ivey said during a news conference Tuesday.

GAUTIER, Miss. — With Hurricane Sally still picking up ocean water well offshore, authorities along the U.S. Gulf Coast are shutting down some roadways and residents are clearing out or hunkering down.

The causeway to Dauphin Island in Alabama has been closed, and they’re closing down the Bankhead Tunnel in Mobile until an expected storm surge recedes. Downtown Mobile is nearly deserted, with businesses boarded up and protected by sandbags.

Rain is starting to intensify along the I-10 highway that runs parallel to the coast through Louisiana, Mississippi, Alabama and Florida. Businesses along the highway exits appeared to be largely closed, and electronic messaging boards on the highway say that a hurricane warning for the area is “in effect.”

In Gulfport, Mississippi, white plastic bags hung over some gas station pumps, showing they’re out of gas. And along a bayou, shrimp boats are being tied up as shrimpers batten down ahead of the waves and storm surge.

ASBURY PARK, N.J. — A man has drowned at the New Jersey shore in seas churned as Hurricane Paulette battered Bermuda.

Lavallette Mayor Walter LaCicero told the Asbury Park Press that the 60-year-old man and his 24-year-old son were swimming near the Vance Avenue beach on Monday when they had trouble in the rough surf. They were rescued, but the older man did not survive. Their names have not been released.

Forecasters say Hurricane Sally could dump flooding rains on a path from Mississippi to the Carolinas this week after the storm makes landfall on the Gulf Coast.

The National Weather Service says after the storm comes inland Wednesday, rainfall of 4 to 8 inches (10 to 20 centimeters) is likely across portions of Mississippi, Alabama, Georgia and the Carolinas.

Significant flash flooding and minor to moderate river flooding is expected through the end of the week, and rainfall could reach 12 inches (30.5 centimeters) in isolated inland areas.

Hurricane Sally was creeping at 2 mph Tuesday toward the Gulf Coast morning, with landfall near the Mississippi-Alabama state line expected late Tuesday or early Wednesday. The storm was forecast to reach land as a Category 1 hurricane with maximum sustained winds of 85 mph (137 kph). Sally was expected to weaken rapidly after coming ashore.

The Florida Panhandle is being pummeled by heavy rains from Hurricane Sally’s outer bands. The powerful, plodding storm was crawling toward the northern Gulf Coast at 3 mph (4.8 kph) early Tuesday.

Its slow speed has raised concerns of extreme rainfall and flooding. Sally had winds of 100 mph, but forecasters were predicting the storm could strengthen even further before it is expected to blow ashore near the Mississippi-Alabama state line late Tuesday or early Wednesday.

Tue Sep 15 , 2020
On Tuesday, McDonald’s debuted the Travis Scott Meal — a Quarter Pounder with cheese, bacon, and lettuce, medium fries with BBQ Sauce, and a Sprite. The limited-time deal only uses items already on the McDonald’s menu, giving the fast-food chain buzz without adding complexity to its kitchens.  McDonald’s said in […] 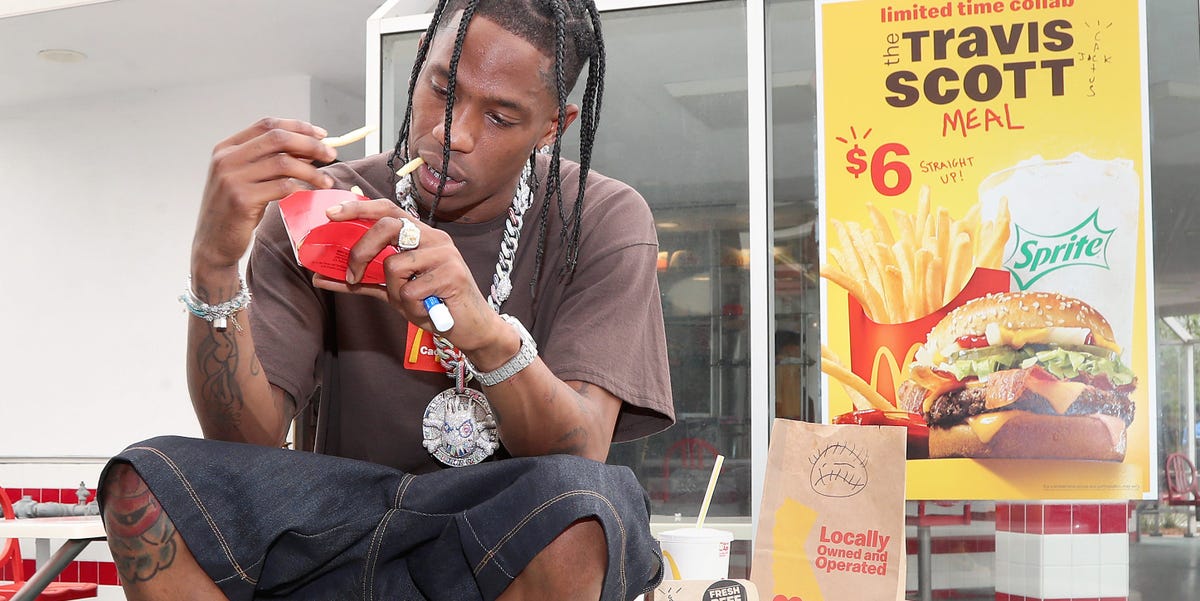