Sorry we’re CLOSED due to COVID-19. Foldable advertising poster on the street Getty This has been a year to remember……. or perhaps, forget. With a raging coronavirus, civil unrest, and rampant political demagoguery, finding the truth has proved challenging. Regardless, there is much we do know and with that, here […]

This has been a year to remember……. or perhaps, forget. With a raging coronavirus, civil unrest, and rampant political demagoguery, finding the truth has proved challenging. Regardless, there is much we do know and with that, here are some thoughts on what has transpired and what may lie ahead. Specifically, we will discuss the virus known as Covid-19, the economy, and the financial markets.

SARS-CoV-2, the virus that causes Covid-19, is completely new. As such, the learning curve was steep (and still is), which provided an ideal environment for those intent on spreading disinformation. Early on, there were no effective treatments for the virus, which partly accounts for the high death tolls in New York, New Jersey and other northeastern states. There was also a scramble to understand ‘exactly’ how the virus was spread; implement proper safeguards (PPG, masks, etc.); and discover existing drugs that may help. We also needed to understand how the pandemic would affect American workers and which industries would require financial assistance. When the Federal government and the Federal Reserve injected a massive amount of stimulus into the economy thru the C.A.R.E. Act, there was a question of efficiency. More to the point, the federal government hasn’t been the most efficient operation at times. Nonetheless, we can now say that the initial stimulus was highly effective in avoiding a more catastrophic economic result.

During this episode, there has been a tug-o-war between the health of individuals and the health of the economy. Although individuals matter most, the health of many would have suffered had we had fallen into a depression. Nonetheless, this dichotomy exacerbated an already polarized nation with President Trump favoring reopening the economy as soon as possible and democrats being more cautious on that front. Interestingly, the consensus medical opinion was aligned with the democrats. Then, when racial unrest began, complete with riots and looting, the chaos intensified. This created an opportunity for those who sought to inflame the situation as small, but highly motivated, groups of ‘nomad’ demonstrators descended on select cities. Moreover, what began as a racial issue concerning one group, quickly extended to other minorities that desired a voice.

You’ve may have heard that America has about 4.25% of the world’s population, but over 20% of total Covid-19 deaths. It seems clear to me that those who suggested early on that this was nothing more serious than the common flu would have withdrawn this belief by now. Where do we go from here?

New Covid-19 cases are rising in most states. I suspect many are growing weary with the stringency of masks, social distancing, etc., and have relaxed their standards a bit. Making such a radical change from our normal lifestyle can be difficult emotionally. Regardless, it is my personal belief that protective measures are necessary and prudent to reduce the spread. What about treatments?

There are scores of companies working to develop an effective vaccine. As a general rule, developing a vaccine for a virus is difficult, and this virus is brand new. Thus, it’s quite possible that this effort will be plagued with setbacks. Even when a vaccine is developed, keep in mind that even the seasonal flu vaccine is only 55-60% effective according to medical experts. Once a vaccine is ready for mass distribution, convincing individuals to receive it could be a challenge, especially if the possible side effects are serious. We know that, at some point, this will be behind us. We just don’t know when. It may be the most serious issue of the day.

Prior to the pandemic, the U.S. economy was doing very well. Unemployment was at a 50-year low and inflation was also below the Fed’s target of 2.0%. However, because we closed a significant portion of the U.S. economy, ‘real’ GDP growth (i.e. the % increase/decrease in economic growth compared to one year prior, ‘net’ of inflation), fell during the second quarter by an astounding 31.40%. These are numbers not seen since the Great Depression.

Unemployment spiked to its highest rate in the post WWII era, hitting 14.7% earlier this year. Although the rate has fallen for five consecutive months, it is still well above its February reading of 3.5%. In the meantime, those furloughed from the leisure & hospitality and airline industries are left wondering if help will come.

The U.S. economy is primarily driven by consumer spending. When consumers spend, companies’ profit and the economy is good. At present, there are 6.8 million more unemployed workers than there were in February. Can the economy flourish with so many on the sideline? Probably not. Assuming Washington passes another stimulus bill at some point (a near certainty), consumer spending won’t fall as much as it would have without the assistance. Even so, there is a risk of waiting too long.

It seems clear that the labor market will be forever changed. First, although corporations were already adding technology in lieu of workers, this has intensified during the pandemic. Moreover, this could accelerate further as companies seek to maximize profits. Next, with so many working from home, some companies will continue this practice, thereby reducing demand on commercial real estate. This erosion of demand could cause a decline in CRE prices and lease rates. Finally, many companies have closed forever, leaving its employees to find other job opportunities. With more workers seeking fewer jobs, it could create a labor market which favors the employer and lead to slow wage growth.

U.S. stocks peaked February 12, held steady until February 19, then fell over 37%, bottoming March 23. From there, stocks rose substantially until they peaked again September 2. It’s important to point out that stocks (i.e. the entire U.S. market) were more than 58% overvalued at the February peak. By September 2, stocks were a whopping 87.5% overvalued, the highest number ever, surpassing even the Tech Bubble in March 2000 when stocks were 49% overvalued. As I write this, stocks are 83.8% overvalued.

Bond yields are a good indicator of economic expectations. When the economy struggles, Treasury yields tend to fall, and vice versa. On February 19, the yield on the 10-year Treasury was 1.56%. By March 9, the yield had plunged to 0.56%, an all-time low at that time. One concern was that yields could go negative as they did in several European countries in 2015. Although this has not yet materialized, and may not, low yields create an environment where bonds as an investment become less attractive. Thus, low yields cause investors (who seek an acceptable return for the risk assumed) to invest in stocks, which pushes valuations even higher.

The first is to buy when valuations are low. In short, buy after a dip in price. Stocks were already overvalued when the pandemic struck, but as long as the economy was growing, the concern was not as great.

Reason number two is momentum, which has been the case for much of this year as stocks rose despite a lack of earnings and a weaker consumer. Too much momentum tends to create higher valuations and is a key ingredient in the formation of a bubble. Remember 2000? Internet stocks, many of which had no earnings at the time, were soaring. Although too much momentum can end badly, momentum can persist for several years (think late 1990s internet bubble).

The next few weeks, as we approach the November election, could bring an increase in market fluctuations as investors grapple with the prospect of a Biden victory (investors already know what to expect from Trump). In addition, the path the virus takes this fall and winter will be crucial, along with the progress made on the treatment/vaccine front. I believe the virus is the key issue and, if it worsens, there will be greater sentiment to shut down again, although that would be a tough sell.

Wed Oct 14 , 2020
Ontario Premier Doug Ford is urging food delivery companies to slash their commission rates for restaurants in the province’s three COVID-19 hotspots that were forced to restrict indoor dining for the next 28 days. Ford made the plea during a news conference at a Toronto restaurant on Tuesday that has […] 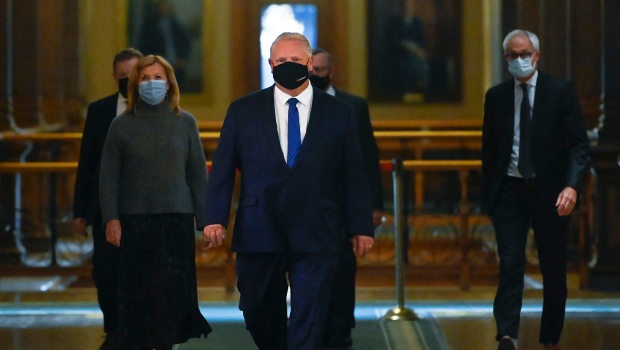