Photograph: Shutterstock Restaurants in most parts of Texas will be allowed to use 75% of their indoor dining rooms starting Monday under an executive order issued Thursday by Gov. Greg Abbott. The governor has also given restaurants an okay to switch back to reusable menus and multiple-serving-sized condiment packages like […] Restaurants in most parts of Texas will be allowed to use 75% of their indoor dining rooms starting Monday under an executive order issued Thursday by Gov. Greg Abbott.

The governor has also given restaurants an okay to switch back to reusable menus and multiple-serving-sized condiment packages like bottles of ketchup, provided the items are cleaned and disinfected after every use by a dine-in party. Currently, only single-use menus and condiment packets are permitted. The relaxation of those measures should provide restaurants with a “significant” cost savings, according to the Texas Restaurant Association (TRA).

The governor stopped short of allowing bars in the state to host on-premise customers again, but repeated his guidance that any place generating at least 51% of its sales from food can be regarded as a restaurant provided that it requires patrons to remain seated while eating and drinking. Bars can continue to offer takeout and delivery of food and drinks.

Restaurants in the state are currently operating under a 50% capacity limit on dine-in service. Many operators have griped that they can’t be profitable when half their dining-room seats can’t be used.  Many have tried to offset the cap by adding or expanding outdoor dining areas. Under today’s executive order, tables offered under a retractable roof will be regarded as a part of the indoor seating, whether the roof is opened or closed, and subject to the 75% limit.

“Today’s announcement puts restaurants back on a path towards recovery,” the TRA said in a statement. However, it noted that many establishments will be unable to put 75% of their seats back into use because of the long-standing requirement that parties be seated six feet apart. The social-distancing mandate trumps the 75% limit.

Restaurants in areas with a high number of hospitalized COVID-19 victims will still operate under the governor’s 50% cap until the number of coronavirus patients stays below 15% of the area’s total hospitalized population for seven consecutive days. The TRA praised Abbott for setting a specific standard for when those places can put 75% of their dining rooms back into use.

Texas sports more restaurants than any other state except California. Sales at those establishments fell by an average of 33% from their year-ago levels during August. Nearly 3 out of 4 (71%) said they do not expect their revenues to rebound to pre-pandemic levels within the next six months, and 50% said they doubt they’ll still be in business six months from now if the federal government doesn’t extend aid.

Fri Sep 18 , 2020
Technavio has been monitoring the automotive battery management system market and it is poised to grow by USD 1.89 bn during 2020-2024, progressing at a CAGR of almost 16% during the forecast period. The report offers an up-to-date analysis regarding the current market scenario, latest trends and drivers, and the […] 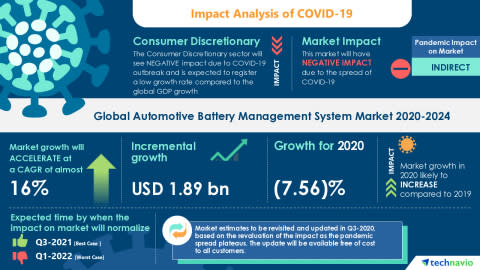