NYSE:NIO gained a further 1.77% on Wednesday as the stock continues its tear this week. Analysts continue to applaud NIO as the company announces further plans for expansion into Europe. Heavy options action has helped to sustain NIO’s upward trend. For the third day in a row NYSE:NIO has jumped […]

For the third day in a row NYSE:NIO has jumped up in price as the stock rose by a further 1.77% on Wednesday to close the trading session at $21.22 after briefly hitting a new all-time high of $22.59. Shares are now up nearly 20% this week after a flood of positive news has hit the Chinese automaker at the right time. Indeed the recent analyst upgrades have accounted for a large volume of bullish call options for the end of the week that have helped to pull NIO’s stock higher.

Much of the positive sentiment can be attributed to the recent analyst upgrades from outlets such as UBS, Bank of American, and Deutsche Bank who have all raised their price targets for the stock. It is important to note, however, that even with the recent price upgrades, the median analyst price target for NIO is still just under $17, so it will be interesting to see if there is a correction at some point for a stock that has climbed so high so fast. 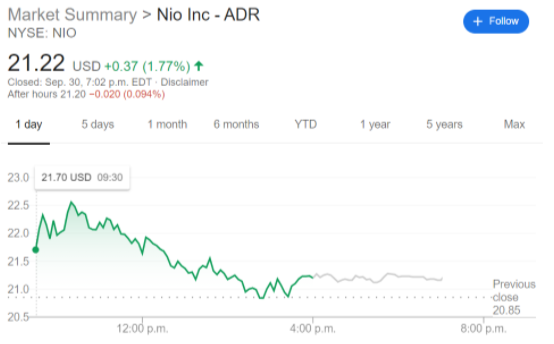 The end of the week could be pivotal to see if NIO can maintain levels above $21. Usually, a fast rise is met by some profit-taking from short-term investors but the influx of call options could keep the stock afloat until Friday. Strong investor interest in what should emerge as the closest thing to a legitimate Tesla (NASDAQ:TSLA) rival, especially in China, should keep this stock afloat until the company can attain profitability. With a planned expansion into Europe by the end of 2021, we may just be seeing the beginning of a long-term rise for NIO’s stock.