Venue: Hampden Park Date: Thursday 8 October Kick-off: 19:45 BST Coverage: Listen live on Radio Scotland & online; text commentary on BBC Sport website & app There was a lot of negativity about Scotland’s use of a back-three in last month’s Nations League games – but I don’t see why […]

There was a lot of negativity about Scotland’s use of a back-three in last month’s Nations League games – but I don’t see why it can’t work for the play-off against Israel.

From the outside looking in, it seemed the switch from 4-2-3-1 was about accommodating Kieran Tierney, who head coach Steve Clarke had available for the first time during his tenure.

But with the Arsenal defender unavailable now, his decision is perhaps a bit clearer. That does not mean there is not merit in Scotland playing a back three, though.

Scott McTominay was identified as a weak link in an unfamiliar role at right centre-back, but he is capable of good defensive displays.

I watched him for Manchester United under Jose Mourinho when he did a fantastic man-marking job on Eden Hazard. So however Steve Clarke sees that, he’s such an experienced coach that you can’t be too dismissive, you trust him.

But whether the manager sticks with the back three or reverts to a four-man defence, the structure is only one part of it.

We all work off the same days as international coaches and managers and the key is how quickly you can get your messages across.

The Israel game [1-1 at Hampden] was difficult but will have been invaluable for Steve in terms of gleaning information for the re-match.

Scotland can have ‘positive future’

In my role as assistant manager of Belgium I had to analyse Scotland ahead of our Euro 2020 qualifiers.

Steve had only had one game in charge, so we looked a lot at his Kilmarnock team first who were very organised, defensively very strong and made it really hard for teams to pass through the lines, particularly centrally.

Scotland were very similar in the games we played, but it was very early in his reign, which does impact the organisation. The heavy losses against us and Russia were tough, but I think you could see the improvements in the wins against Cyprus and Kazakhstan.

Even in Belgium’s 4-0 win at Hampden, Robertson was a big threat, and we’ve seen some good combination play between him and Callum McGregor, and also Ryan Fraser on the left when he has played. In recent matches we’ve also seen the impact of John McGinn going forward.

Scotland have very good technical players playing at a really high level whether it’s the Premier League, Championship, or European football with Celtic and Rangers. 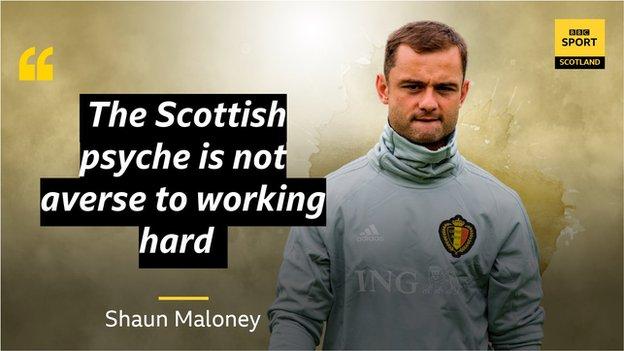 They’ve been exposed to different styles of coaching at club level and I think players now are becoming more tactically aware than maybe in my period as a result.

The mentality that the group have – which is something we have as a nation – is an amazing attitude towards hard work.

Every team has to suffer out of possession and I think the Scottish psyche is definitely not averse to working hard. And when you blend that with the technical ability we’re now acquiring it can be a really positive future.

That bright future can start now with an amazing opportunity to reach a major tournament.

Israel are a good team. The system and personnel they played in the draw at Hampden last month made it very difficult centrally.

They end up with four or five players looking for possession in central areas. That’ll be tough to stop, but I think there were still moments in the game where Scotland’s pressure was really good.

You have to try and get your best players in positions they can impact the game. Steve is an excellent and really experienced coach, they’ll be well prepared.

Save big on the Amazon Echo Show 5 right now

Thu Oct 8 , 2020
You can get the Echo Show 5 for under $50 right now, plus get cool extras. (Photo: Amazon) — Recommendations are independently chosen by Reviewed’s editors. Purchases you make through our links may earn us a commission. Life gets so hectic sometimes it helps to have an assistant. With the Echo Show […]