By Howard Schneider, Ann Saphir (Reuters) – U.S. Federal Reserve policymakers split over how to apply a new strategy for monetary policy at their September meeting, and, amid growing doubts about the path of the economy, offered no clear sense of their next steps to offset the coronavirus recession. The […]

(Reuters) – U.S. Federal Reserve policymakers split over how to apply a new strategy for monetary policy at their September meeting, and, amid growing doubts about the path of the economy, offered no clear sense of their next steps to offset the coronavirus recession.

U.S. central bankers agreed unanimously in August on a broad new approach to monetary policy, and “most participants supported providing more explicit outcome-based forward guidance for the federal funds rate” to flesh out the new framework, a readout of the Sept. 15-16 meeting released on Wednesday said. The Fed adopted that approach in September with promises to keep interest rates near zero until its 2% inflation target and full employment are reached.

However participants in the Federal Open Market Committee deliberations also “discussed a range of issues associated with providing greater clarity” about the Fed’s plans, with a couple officials wanting a stronger promise to push inflation above 2%, several arguing such promises did little to help the economy at this juncture, and others arrayed around different choices, the minutes said.

The scope of the debate reflects the uncertainty the U.S. central bank is facing as it navigates a recession brought on by the global coronavirus pandemic.

The minutes showed continued worry over weak inflation globally, and a more acute emerging concern that the Trump administration and Congress might fail to deliver the fiscal support many central bankers say is needed – a point hammered home by the collapse in talks this week over a further stimulus bill.

It also showed the opening of a debate over possible changes to the Fed’s current $120 billion pace of monthly bond purchases, but only that “some” participants felt it would be appropriate to assess that “in future meetings.”

The discussion may be joined sooner rather than later.

The Fed on Wednesday released research from a top Fed staffer concluding the central bank could speed the economy’s rebound from the recession if it amped up its bond holdings by another $3.5 trillion, more than what it has purchased so far in the battle against the pandemic.

Given the hit to the economy earlier this year, bond purchases “equal to 30% of…(gross domestic product), or about $6-1/2 trillion dollars, is required to offset the impact,” wrote Fed economist Michael Kiley, deputy director of the Fed’s financial stability division. The Fed has added about $3 trillion to its balance sheet since the current crisis began in March.

Some private analysts meanwhile said the possible failure of fiscal policy talks could force the Fed’s hand if the economy starts to slip amid a tentative recovery.

The end of fiscal talks “unless reversed with a 180-degree turn by President Trump – threatens to put the Fed in a bind,” former New York Fed official and ISI Evercore vice president Krishna Guha said on Wednesday. “The central bank would have to consider what more it can do,” with promises about future bond purchases one of the “live” options.

The U.S. Federal Reserve last month signaled that interest rates are likely to stay at zero through 2023, vowing to wait on rate hikes until employment is back at its estimated maximum level, inflation reaches 2%, and is set to rise moderately above that level for a time.

Fed Chair Jerome Powell warned Tuesday that the outlook for the U.S. economy is “highly uncertain,” and that too little policy support could lead to more household and business insolvencies and “recessionary dynamics” where a weak recovery feeds on itself.

Fed policymaker comments have revealed a broad divide on views of where the economy is headed.

St. Louis Fed President James Bullard has said he expects the U.S. economy to notch a near-full recovery from the coronavirus recession by year’s end.

On the other end of the spectrum is Boston Fed President Eric Rosengren, who has warned that a second wave of Covid-19 this fall and winter could set the recovery back and create a credit crunch.

Across that spectrum, there are differences about how the central bank should position itself.

The minutes showed there was one point of agreement: “Participants continued to see the uncertainty surrounding the economic outlook as very elevated, with the path of the economy highly dependent on the course of the virus.”

Fri Oct 9 , 2020
Technavio has been monitoring the precision livestock farming market and it is poised to grow by USD 2.17 billion during 2020-2024, progressing at a CAGR of over 10% during the forecast period. The report offers an up-to-date analysis regarding the current market scenario, latest trends and drivers, and the overall […] 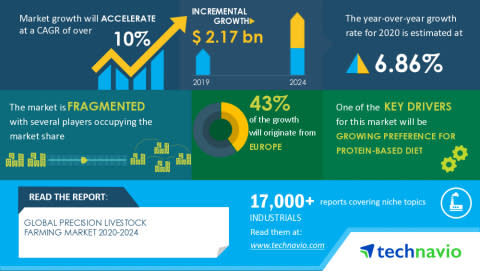