CLOSE Food trucks have been part of downtown Indianapolis’ food scene for more than a decade. Now they’re taking their delicious offerings to residential areas. Wochit One of Sophie Leighton’s earliest holiday memories involves wrapping and delivering Hanukkah presents for kids in need. For the past five or six years, […]

Food trucks have been part of downtown Indianapolis’ food scene for more than a decade. Now they’re taking their delicious offerings to residential areas.

For the past five or six years, her family’s Thanksgiving Day has begun with helping God’s Love We Deliver bring meals to the elderly in and around the Bronx.

The theme, imparted via words and action by Leighton’s parents, Nancy and Andrew, has been consistent: We’re fortunate. Others are not. We have an obligation to help. That message hasn’t been lost on their daughter.

Like many athletes, the former Mamaroneck High all-state field hockey player was disappointed when college sports came to an abrupt halt in March.

Leighton was playing spring field hockey for Lehigh after completing her first regular fall season, where she saw action in 10 games and was named to the All-Patriot League Honor Roll and to the National Field Hockey Coaches Association All-Academic Team. But she was back home in March with time on her hands and a determination not to waste it.

“When I came home from school, I was just looking to get involved as a way to help with the community,” explained Leighton, who noted, with the pandemic, “there were so few opportunities to volunteer to help out physically.”

But that didn’t mean she couldn’t help at all.

At the time, New Rochelle was so-called Ground Zero for the coronavirus in New York. Ten of the state’s first 11 confirmed cases occurred in that city, then, quickly, 108 of the first 173, which triggered the state to send in the National Guard.

Instead of regarding that as a giant “Do Not Enter” sign, Leighton regarded New Rochelle’s troubles as a green light to help.

With some investigation, she discovered the WestCOP food bank. Her parents were having the family groceries delivered and started expanding their order. A few times from March to April, Leighton took the extra foodstuffs to WestCOP, where National Guard members accepted them on WestCOP’s behalf.

But Leighton considered this a drop in the bucket and set her sights on doing more.

She discussed ideas with former Mamaroneck and current RPI soccer player and neighbor Simran Nambiar and then contacted a man they’d heard about whose business distributing fresh food to restaurants was hurting with restaurants either totally closed or limited to takeout.

Leighton launched a GoFundMe to pay for the items, then emailed people, seeking donations. Twenty-six people shared this on Facebook.

This had another ripple effect. Her Mamaroneck field hockey coach, John Savage, said, “I can’t stand on the sideline.”

He then contacted his players and asked if they’d be willing to donate to the Mamaroneck Larchmont Hunger Task Force.

He told them, “This is something to help people and be a better person for it.”

There was no pressure, but everyone donated.

And his players didn’t just ask parents for money or donate some of their own. They also ran a virtual 5K to secure donations from others. All told, that food bank received about $1,000 from Savage and his team.

Leighton had hoped to raise about $600 through the GoFundMe to buy three weeks of produce. She ended up with just under $3,000, so the pallets of produce – sweet potatoes, Idaho potatoes, tomatoes, broccoli, cucumbers, bananas, lettuce, mint and other herbs for cooking and more – kept flowing to WestCOP into late spring when the worst of the pandemic was over in New Rochelle.

Some of the items that went to WestCOP in New Rochelle as a result of Sophie Leighton’s GoFundMe efforts (Photo: Submitted photo)

WestCOP was grateful. People who otherwise might be living on canned food were getting food much higher in nutrition, including kids who’d normally rely on food from their then-closed schools.

“She’s one of the most caring, unassuming kids. This is perfectly in character,” he said, noting, with those personal March and April deliveries, Leighton had “put herself on the line a little bit,” since New Rochelle was such a COVID hotspot.

Of the latter, he said, “I think it’s a great experience for kids. And it’s showing that kids in Mamaroneck know what’s important.”

Now, he’s considering asking his team to help elderly area residents, maybe with raking and/or shoveling. And maybe they’ll start writing letters to the nearby nursing home patients who have no family members.

And all stemming from what a college kid with time on her hands and concern in her heart had started.

A PROGRAM FOR THOSE WHO’VE SEEN AND EXPERIENCED TOO MUCH: Pegasus’ horse therapy calms stressed veterans, EMS and COVID workers

A LOOK AT THREE AREA FARMS THAT AIM TO HELP: Back from COVID closure, equine therapy embraced by users, including first responders

Nancy Haggerty covers cross-country, track & field, field hockey, skiing, ice hockey, girls lacrosse and other sporting events for The Journal News/lohud. Follow her on Twitter at both @HaggertyNancy and at @LoHudHockey.

Local sports coverage relies on its readers. Subscribe to The Journal News/lohud.com .

12 days in the life of a firefighting crew: Portland area battalion helps save southern Oregon homes

Sat Sep 19 , 2020
Portland Battalion Chief John Derr drove south through the night on Interstate 5, leading a caravan of four fire engines and one smaller brush rig straight to a fire charging toward the southern edge of Medford. They pulled in at 1:15 a.m. that Wednesday, barely 24 hours after winds on […] 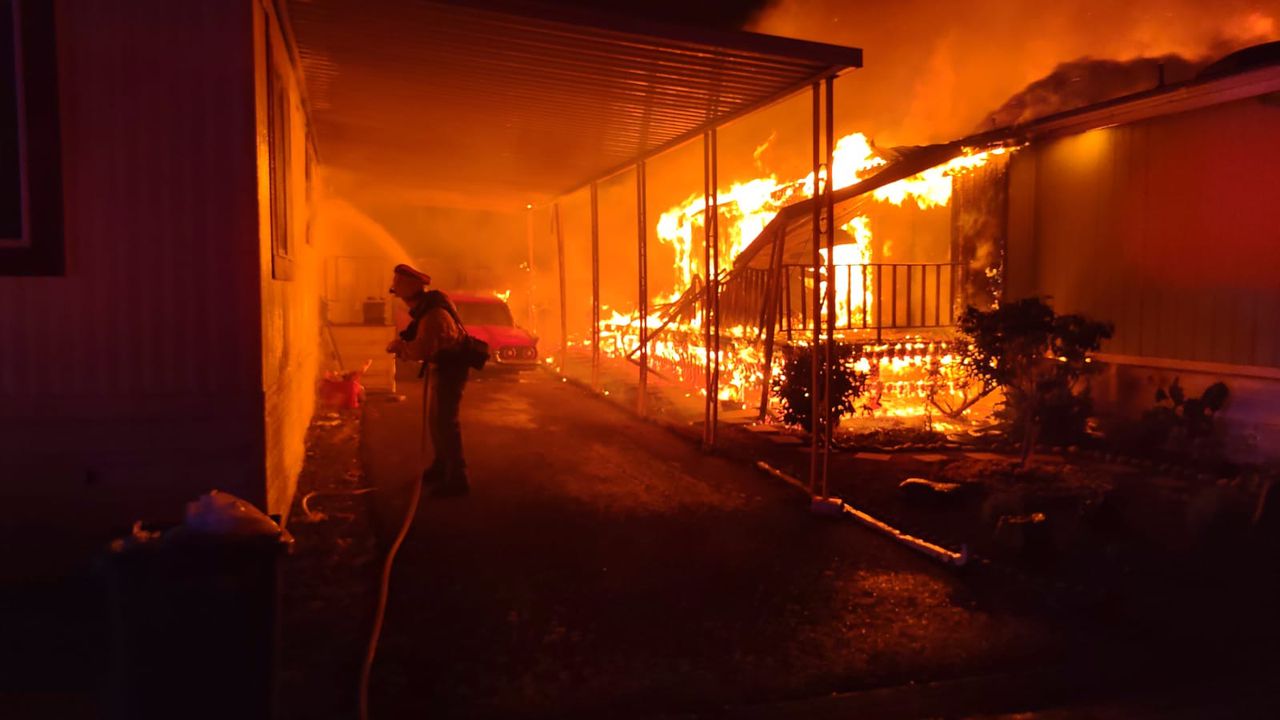