SINGAPORE (Reuters) – Singapore’s economic decline is expected to have slowed significantly in the third quarter as the city-state loosened coronavirus curbs, giving the central bank room to keep monetary settings unchanged when it meets next week.

Gross domestic product (GDP) is expected to contract 6.8% from the same period a year earlier, according to the median forecast of 11 economists in a Reuters poll, marking the third straight quarter of decline. The economy had shrunk 13.2% in April-June – its worst performance on record as the country went into lockdown.

GDP may jump 35.3% on a quarter-on-quarter seasonally adjusted and annualised basis in July-September, the poll showed, picking up from a 42.9% plunge in the second quarter.

“We expect a rebound from the second-quarter lows as economic activities partially resumed from June, although some restrictions remain,” said Jeff Ng, senior treasury strategist at HL Bank.

All 14 economists polled by Reuters forecast the Monetary Authority of Singapore (MAS) will keep its exchange-rate based policy on hold at its review on Oct. 14. However, while economists say the worst is over for the economy, they expect the recovery to be sluggish, and see fiscal policy as the main driver of any rebound.

The central bank manages monetary policy through exchange rate settings, letting the local dollar rise or fall against the currencies of its main trading partners within an undisclosed band.

At its last semi-annual policy meeting in March, the MAS delivered its biggest easing move since the 2009 financial crisis, by flattening the band’s rate of increase and effectively shifting its centre lower.

The government has spent about S$100 billion ($73.47 billion), or 20% of its GDP, in virus-related relief to support households and businesses. Still, the small and open economy is officially expected to contract 5%-7% this year in its worst recession, while the unemployment rate in August touched its highest since the middle of 2004.

“We are recovering but so far still a partial recovery and the road forward is probably going to be quite gradual and pretty volatile, depending on how the situation pans out globally and domestically,” said Brian Tan, regional economist at Barclays.

Thu Oct 8 , 2020
The Freight Payment Equipment market will register an incremental spend of about $12 billion, growing at a CAGR of 8.45% during the forecast period. A targeted strategic approach to Freight Payment Equipment sourcing can unlock several opportunities for buyers. This report also offers market impact and new opportunities created due […] 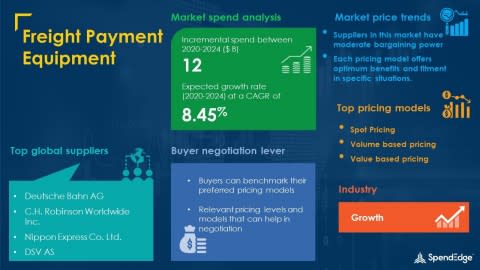