A woman fetching water in Burkina Faso. (S. Lucille Blakeley, University of California, Santa Barbara) Cost is a major reason for that. An investment in seed, fertilizer or even a piece of small machinery—if the money or access to credit are available at all—could strap farmers with serious debt if […]

Cost is a major reason for that. An investment in seed, fertilizer or even a piece of small machinery—if the money or access to credit are available at all—could strap farmers with serious debt if the year that follows is marked by drought, disease, or insect infestation. With few resources to fall back on, such debt could be catastrophic.

Crop insurance can protect farmers from such losses, but traditional crop insurance is all but nonexistent in West Africa. That’s why some governments and non-governmental organizations see hope in “index insurance,” a relatively new form of coverage that triggers automatic payments when weather conditions deviate from historical norms, rather than paying for actual crop damage. Cutting out the assessment step, in theory, reduces the cost enough to be affordable to farmers with only a handful of acres to their name.

Freedom from full-on financial devastation could be a boon for those farmers, who labor in countries where climate change and population growth are already adding pressure to the food system.

“The hope is if a farmer is protected from the downside risks, they might be more likely to invest in fertilizer and seed to increase their yields. The promise of the index insurance is to provide social safety nets that help enable innovation,” said Chris Funk, a remote sensing scientist who works with the Famine Early Warning Systems Network (FEWS NET) through the USGS Earth Resources Observation and Science (EROS) Center. “I think it’s hard to appreciate just how little infrastructure there is in terms of a social safety net” in West Africa.

If the goal is a safety net, remote sensing data are the rope. To make sense for farmers and insurers, the “index” piece of index insurance needs reliably sourced and historically accurate data that reflects conditions on the ground and trigger payments when farmers need them.

That’s where EROS can play a role, Funk said. EROS produces a host of datasets through its partnership with FEWS NET and the University of California-Santa Barbara’s Climate Hazards Center (CHC) and distributes them at no cost through its Early Warning website. The information has been used for decades to guide food aid across the developing world, but a new study dives into the possibility of using it to refine and improve index insurance products for West Africa.

“EROS has spent decades building up this public good, which is this incredible stream of Earth observations. We really developed them to prevent famine, but it turns out that they have all these other really important societal applications,” said Funk, who co-authored the study with S. Lucille Blakeley, a PhD candidate at UC-Santa Barbara.

Farmers in Tambacounda, Senegal meet with index insurance experts to learn how insurance could be used to improve their livelihoods. Index insurance is built to pay based on drought conditions, rather than damages.

The new study is one piece of the lead author’s dissertation on understanding and improving index insurance products. Blakeley began her PhD work after several years with the International Research Institute for Climate and Society (IRI), which works with African partners to build indexes and pilot insurance programs.

“We’re covering places that are really sparse in data in general,” she said. “When you look at the middle of Senegal, for example, that’s a place that doesn’t have a whole lot of rain gauges, so you can’t really create an index based on rain gauges. Remote sensing fills this gap where you really need to have data.”

“I was curious to see if we’re using the correct datasets,” Blakeley said.

She and her co-authors calculated decadal trends in precipitation (water supply) and ET (water demand), then investigated how closely they were associated with crop yields from 1981-2016. Both indicators were reliable predictors of drought and could be useful in guiding insurance payouts, the study found. It recommended the continued use of precipitation data in the near-term, but also suggested that coupling it with RefET in the future could help refine payment schemes as temperatures warm.

If a great deal of rain falls during the growing season, for example, but the year as a whole is hot and dry, the rainfall could dissipate too quickly to have the effect on yields that precipitation data alone might predict.

“Rainfall and ET are part of a system,” Blakeley said. “They’re really complementary. The ideal model would be one that integrates both.”

Blakeley also sees the incorporation of Normalized Difference Vegetation Index (NDVI) data as a possible guide for indexes in the future. NDVI is a figure calculated with satellite data that serves as a stand-in for crop health used to monitor drought around the world.

“NDVI is really underutilized in West Africa … That could be useful in helping to determine, overall, how the season ended up,” she said.

Another co-author, Greg Husak of UC-Santa Barbara, contributed to the study’s design by helping to pinpoint which months were most important for crop production and what climate trends were significant within the historical norms.

Looking to the right data at the right time to find impactful shifts will be key to creating a product that can be trusted by farmers and affordable for insurers, Husak said. An index that does not adjust for fluctuations within West Africa’s decades-long cycles of high or low precipitation could result in situations where the driest of 15 years doesn’t trigger a payment where it’s needed, for example, because the year in question isn’t as dry as one from the dry cycle of the 1980s.

Cattle being driven home in the evening in Kaolack, Senegal.

“Then there are other situations where you may have an area that’s dry, and insurers will figure out pretty quickly that they can’t pay out in three out of every five years,” Husak said. “That’s why a good portion of the paper was an analysis of the trends in the data and where those trends were significant: Insurers want to pay the policy holders at the right time, and farmers also want to be paid at the right time.”

Index insurance pilots have shown promise, Blakeley said, but mismatches between payouts and farmer needs have been an issue. The new study should help organizations such as IRI refine their products and reduce such mismatches, she said, as well as offer more confidence to guarantors like the World Bank and World Food Program.

“Having a more accurate index helps us on multiple fronts,” she said. “The insurance company will make fewer faulty payouts, making the insurance itself cheaper. Additionally, it’s going to build the trust of the index insurance product from the farmer. When farmers have more trust in a product, they’re more likely to purchase it. Having a base of people who purchase the product makes it more stable in general.”

Funk, for his part, was glad to take part in a study that holds promise for improving conditions in a part of the world where he and his EROS colleagues have worked to provide assistance for decades.

“I can’t go to Africa and give someone a dollar. It’s impractical,” he said. “But we can offer up this incredibly powerful data. People are very good at using our data to guide food aid, and that’s great. But it would be even greater to help bring the Green Revolution to Africa.”

What’s at stake in a new Supreme Court

Sat Sep 19 , 2020
Environmental regulations, above all involving climate change, would probably be struck down. By a 5-to-4 majority, the court has held that the Environmental Protection Agency has the authority to regulate greenhouse gases. With a new member, the court might overrule that precedent. At the least, the court would probably severely […] 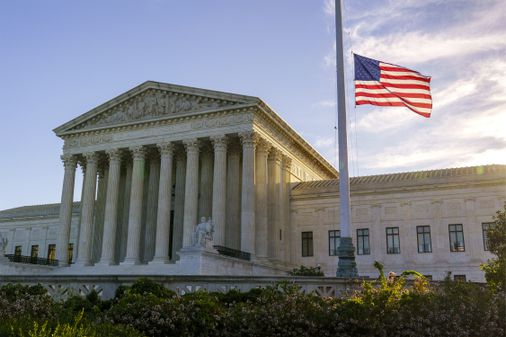