Syracuse, N.Y. — WCNY’s sixth annual Taste of Fame dinner fundraiser will move virtual this fall due to the coronavirus pandemic. As a result, diners will be tasked with cooking their dinners at home using a box of ingredients delivered to their homes ahead of time. In many ways, it’s […]

Syracuse, N.Y. — WCNY’s sixth annual Taste of Fame dinner fundraiser will move virtual this fall due to the coronavirus pandemic.

As a result, diners will be tasked with cooking their dinners at home using a box of ingredients delivered to their homes ahead of time.

In many ways, it’s similar to the career of Chef Marcus Samuelsson. He first tasted fame as the chef at Aquavit, a pioneering Scandinavian restaurant in Midtown Manhattan, where he became the youngest chef to ever receive three stars from The New York Times.

The Ethiopian-born, Swedish-raised Samuelsson runs more than a dozen restaurants worldwide, but is likely best known for Red Rooster Harlem, where he serves elevated takes on Southern American cuisine at an approachable price. The idea, he said, was to serve the neighborhood he now calls home.

Samuelsson, 49, is also a television mainstay. He hosts the PBS show “No Passport Required.” He was crowned champion of season two of Bravo’s “Top Chef Masters” and Food Network’s “Chopped All Stars” and was the winning mentor on ABC’s “The Taste.”

He talked with syracuse.com | The Post-Standard in late August about what it’s like to run restaurants amid a pandemic, his new role at Bon Appétit magazine and what the future of restaurants may look like.

Here are excerpts from the interview, edited for clarity and brevity.

The menu for the Taste of Fame dinner has a lot of traditional Southern ingredients. You have red velvet cookies, you have sorghum, pecans, yams. What was your mindset like planning the menu for the dinner?

I thought it would be a fun to bring southern hospitality to Upstate and talk about my cookbook, “The Rise,” that’s coming out about that time, where we focus on black excellence and African contributions to American food.

You first burst onto the scene at Aquavit cooking Scandinavian food— certainly something different than what you’re doing at Red Rooster. How did you make that change? What do you think that change represents to you as a chef?

You have been active in the Harlem neighborhood. Can you speak little bit about Harlem and what that neighborhood means to you?

It’s an American iconic neighborhood that people know all over the world. It’s filled with culture and enriching history. I don’t know any other neighborhood that makes you think about its institutions, like the Apollo. Right away you think of iconic institutions and people. So even if it’s a tough time right now as a nation, Harlem still produces incredible American culture.

You just touched on this a little bit — the challenges communities and restaurants are facing. Obviously the big one is the coronavirus pandemic. Indoor dining hasn’t reopened in New York City yet. How has it been dealing with that? What challenges have you faced dealing with the pandemic?

When you only are allowed to open outdoors, it makes it very unpredictable. [August 25] was a great example. It rained for an hour and then we had good weather again. Do you reopen? What do you do? And we’re living in a four-season climate, so we’ve got five, six, eight weeks maybe? So normally you plan a restaurant for 8, 10, 12, 15 years and you sign a lease accordingly. It’s very, very hard for the team, for me, for everybody. We can’t plan now.

Winter will be coming. Eventually outdoor dining won’t be feasible. What do you foresee as permanent changes in the way restaurants look and operate?

I think It’s almost too early to say. First, people have already changed their habits. You’re probably going to see more ghost kitchens. I think that we have to think long and hard at this because what you envision the neighborhood to be, the restaurant supplies that. They’re the heart and soul of that. So, when you remove restaurants, you really remove retail, you remove barber shops, the coffee shops. No one envisioned a great neighborhood without having a restaurant. So, this is a very important time for New York City to make this decision, to determine the type of neighborhoods we want to live in. If we don’t have small businesses, what are our neighborhoods?

I think that these major events change us. 9/11 changed how we travel. This is a historical shift. It will not go back to what it was. It’s forever changed. It’s just the truth. Something cracked, something broke. It doesn’t mean that we’re not going to go out to a restaurant. I think gloves and masks are here for a long time. I think that crowds are something people are going to be intimidated by. So, tell me, is that 2023 or 2022? I don’t know. I know that the next 18 months, we’re in this.

You’ve traveled to cities across the country as the host of No Passport Required. What were some eye-opening or educational moments that you learned in the production of that show?

How incredibly proud immigrants are of being Americans and want to add value. They’re proud of the country they choose to live in. Everyone wants to share their culture. They take pride. If I listen and they show me, I get to know that person in a different way.

You just joined Bon Appétit as a guest editor. There’s been a racial reckoning in all food media this year, particularly at Bon Appétit. Can you speak to the kind of impact you hope to have at Bon Appétit?

I’m grateful for the opportunity to make great change. And change is hard, especially when you’re going to start it. I just ask people to look at it 100 days or five months down the road and then evaluate the change that Sonia (Chopra, Bon Appétit’s new executive editor) and I are trying to create. You always have to ask yourself as a Black person, “Can I do more good inside or the outside?” And you need both. You need checks and balances. That’s what I asked myself. Push and pull can really help change. I look forward to creating great content and creating create opportunities for creatives of color. For those writers or chefs, these are ultimately pipelines that can stay for a very long time. It can be a more equitable and diverse platform and institution. But that takes time, and I’m in the middle of that right now.

Bon Appétit and all the other projects you have going on right now seem to share a common goal. What was your goal when you first started cooking?

My very first goal was to keep rolling meatballs with grandma. Keeping up with Helga in the kitchen was a full-time job. Once I focused on being a professional, my goal was to get to France, to a three-star Michelin star restaurant in France. The goals are serious. It took me several years to get there. Then eventually to come to America and work in a diverse city like New York City. Those were goals that were very meaningful and important to me.

You did the classic European fine dining. But now at Red Rooster, there’s obviously a totally different vibe. Was there a moment that you decided to make that sort of switch?

I think there were many. My mother always asks some basic questions to me (about higher prices and concerns of accessibility.) And my response was to move to Harlem and cook something that Harlemites, hard-working regular people can afford to be part of. Creating delicious food for them operates for me in these terms, whether that’s fine dining or not. You must create food for the moment. Creating the food at Red Rooster is just as difficult as the food at Aquavit, just a different medium for different ingredients. You can’t measure the excellent quality of what played at Lincoln Center, Carnegie Hall, or Apollo, or in the streets. Because it’s just very different platforms and different times. Great music is great music. Good food is good food.

On the same lines of making food accessible and approachable. You brought back Street Bird for nationwide delivery. (It’s a deliver-at-home kit that can be reheated and serve a whole family.) Do you think that’s a sign of a new trend?

A big portion of the traditional way we look at restaurants is gone in 2020. It’s gone as we think. It might come back at 40%, 50%, 60%. Maybe even 70%. But you have to connect with an audience, the diner, in many different ways. And everyone likes to get packages and get joy. That’s what we hope to deliver with this.

You have restaurants, TV shows, public appearances. You’ve got a lot of stuff going on. How often do you find time to cook at home?

I try to cook at home for my family three or four days a week. Maybe not dinner all the time, but a meal of some sort. I try to do breakfast every day. But then I also use my home kitchen a lot for recipe development. So, there’s always lots of food in the kitchen.

It seems like everybody picked up some sort of new cooking hobby during the pandemic this year. Sourdough bread was super popular. What kind of projects or things did you do with all the that time?

I’ve spent as much time as I possibly could with my son. I really appreciate the little man and how much joy we’ve been able to carve out in a completely chaotic and difficult condition. Other kids in our neighborhood, their parents are trying to create normalcy. I have a new level of respect and admiration for my neighbors and the parents trying to create more of a normal life for their kids nationwide.

How old is your son?

When you’re cooking at home, are there one or two dishes that are a family favorite that you make the most or enjoy cooking the most?

I make a lot of vegetarian food at home. It can be as simple as just roasting corn now, when they’re still incredibly sweet and delicious, and fold them into some beautiful late summer tomatoes with fresh basil or mint. Then maybe I make some fresh cheese that we sprinkle on top. It doesn’t have to be elaborate. All these things are out there [in nature] that don’t take long time. Part of wanting to live in an urban life is that you have to work on that a little bit harder, versus Upstate, where it’s all around you. Growing up in Sweden, I grew up in nature a lot. I’m trying to give [my son] that.

One last thing: If there’s one thing that you’d want people who enjoy food to know, what is it?

Cook different things. Cook things within your culture, cook things out of your culture. Fail, succeed, you know what I mean? Cook a lot, because it’s fun. You got to look for the things that add some level of calm and some purpose. There’s going a lot of volatility. It’s an election year. But you can say “I tried something out of my culture today.” It’s also something you can do to stay connected to your friends. You can take a picture, you can FaceTime and say “hey, look what I did.” There is a connectivity there that is beautiful.

Tickets are available at a 10% early bird discount from now until Thursday, Sept 10. WCNY members will receive an additional 5% off. To buy tickets, visit wcny.org/events or call (315) 453-2424. The event is presented by Wegmans and Visions Federal Credit Union.

Jacob Pucci writes on food, restaurants and all things gastronomic across Central New York. Contact him by email at [email protected] or on Twitter at @jacobpucci.

3 cases that hint at Amy Coney Barrett's views on policing 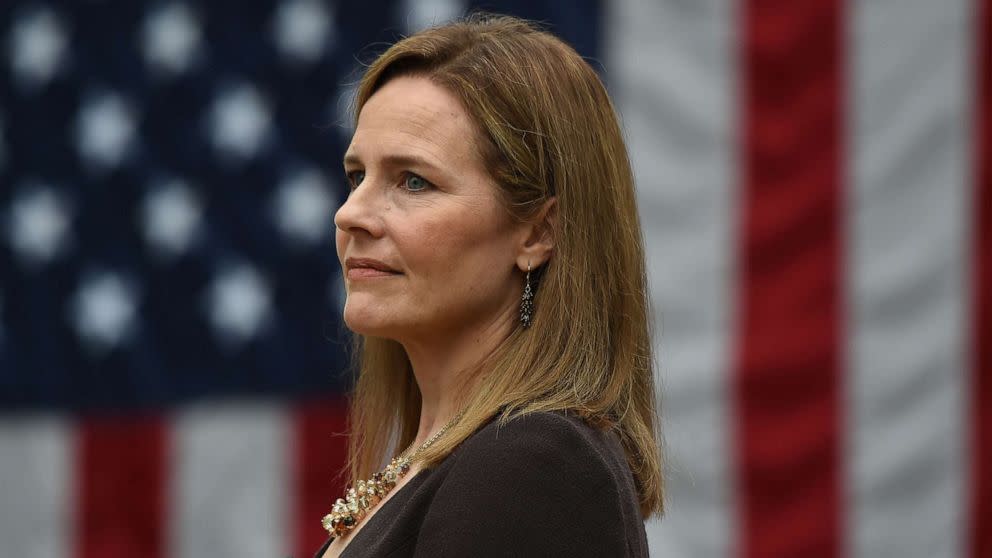