President Donald Trump’s repeated demands that the U.S. Postal Service raise the rates it charges Amazon sent the leaders of the country’s mail system scrambling earlier this year, fearful that a substantial price increase could end up costing its already beleaguered budget $1.3 billion in profits. Such an increase threatened […]

President Donald Trump’s repeated demands that the U.S. Postal Service raise the rates it charges Amazon sent the leaders of the country’s mail system scrambling earlier this year, fearful that a substantial price increase could end up costing its already beleaguered budget $1.3 billion in profits.

Such an increase threatened to force the USPS to cut its own staff, while resulting in higher costs for consumers and companies, including pharmacies and other entities that send drugs to seniors by mail. The service raised those potentially crippling complications in an undated memo obtained by The Washington Post from American Oversight, a watchdog group that requested the records under federal open-records law.

The USPS memo, unreleased until this week, reflects the political bind facing the agency this spring as it sought to balance Trump’s political broadsides with its own urgent need to shore up its balance sheet. The Postal Service has had to borrow from the federal government to sustain operations in the face of a $160.9 billion debt, opening the door for the Trump administration to try to demand specific structural changes under its new postmaster general, Louis DeJoy.

Trump at times has even called the USPS a “joke,” and in April suggested it raise the price of a package by “approximately four times.” He has repeatedly claimed that the service is in debt because it delivers so many parcels on behalf of Amazon – an e-commerce titan that by far is the Postal Service’s largest corporate client, the newly obtained documents show.

But USPS officials – who sketched out that possibility of a sizable price increase and shared their findings internally – found it could prove devastating to future operations. “If USPS were to raise Parcel Select prices by anywhere from 0.5-4 times current published pricing, we would rapidly price ourselves ‘out of the market,’” the document read. Parcel Select is a ground delivery offering for large and medium-sized shippers.

On Thursday, a lawyer for the Postal Service asked American Oversight to “immediately take these documents down” from its website, saying “multiple pages” should not have been released. The group removed documents, except for excerpts related to topics The Washington Post covered, for 24 hours to allow the USPS to specify which pages should remain unavailable.

The USPS and Amazon each declined to discuss their business arrangements, including the current state of their delivery contracts. Postal Service spokesman David Partenheimer added that the “commercially sensitive and proprietary information” had been inadvertently disclosed.

“We are still assessing the nature and scope of the inadvertently disclosed information,” Partenheimer said in an emailed statement. “At this time, the Postal Service is pursuing available legal avenues to protect against further release of this information.”

“For more than two decades, Amazon has partnered closely with the U.S. Postal Service to invent and deliver for our customers, which has resulted in significant revenue for the USPS and thousands of American jobs,” Amazon spokeswoman Rena Lunak said in a statement. “USPS continues to be a great partner in serving Amazon customers.”

In fact, Amazon is the largest commercial customer the Postal Service has. Amazon generated $3.9 billion in revenue for the agency in the fiscal year that ended last September. And the Postal Service turned a $1.6 billion profit on that business, nearly twice as much as any other customer, according to one memo first reported by The Post this week. The revelation was included in a trove of nearly 10,000 pages of documents that show how the agency struggled this spring to fix its finances and manage its responsibilities during the pandemic.

“The USPS has long been a valued partner for final delivery as well as a customer and a competitor,” UPS spokeswoman Kara Ross said via email.

Etsy declined to provide a statement in response to questions. eBay did not immediately respond to a request for comment.

The Postal Service disclosure threatens to upend the agency’s Parcel Select and online retail business, according to industry experts. One high-ranking former postal official said it made the USPS “look like a bunch of amateurs” who couldn’t protect shipping customers’ information. It also threatens the Postal Service at the bargaining table next time clients negotiate new agreements.

“It’s all out there for you to see,” said the person, who spoke on the condition of anonymity to describe sensitive pricing information. “It embarrasses your customers. This is the kind of breach that undermines the trust that you have in the Postal Service.” They added that UPS and FedEx will go through the details and try to undercut the USPS.

Trump’s suggestion to quadruple rates this spring came as the Postal Service was negotiating new terms for an Amazon contract, something that hampered the agency’s ability to negotiate with the e-commerce giant, the documents show. For much of his presidency, Trump has criticized the Postal Service for being a patsy to Amazon, which he has said has been “ripping off” the agency with a “sweetheart deal.”

His antipathy toward the post office appears rooted, in part, in his animus toward Bezos and his ownership of The Post, whose news coverage the president thought was unfair and too tough on him.

White House spokesman Brian Morgenstern said Trump’s efforts are aimed at improving the Postal Service’s financial future, adding that the president “encouraged the Post Office to raise its package delivery prices to ensure that the USPS will be more solvent in the future, and to protect the jobs of hardworking American postal workers.”

But the president’s remarks may have strengthened Amazon’s hand in its negotiations with the Postal Service. Agency negotiators found themselves having to respond to Amazon’s concerns about the uncertainty of postal rates, as well as whether the agency would be able to honor contractual commitments if its financial foundation is undermined, according to the documents.

And Amazon raised those concerns just as the coronavirus pandemic created an opportunity for the Postal Service to expand its relationship with the company. At the time, Amazon was struggling to meet the massive demand from customers shopping from home.

“Our competitors are using this moment to go after new business, and ride the rising tide of volume growth to improve their density and their margins,” a document titled “Brief on Amazon-USPS Relationship” read. “By contrast, if we lose customers during this period, we enter a negative cycle, as we will have less volume and contribution to cover our costs, and will be forced to raise prices.”

Raising rates would likely drive Amazon as well as four other massive customers – UPS, FedEx, DHL and Pitney Bowes – to handle more of their own shipping, rather than pay the higher fee, another memo read. All told, that would put $2.9 billion of profit at risk.

And while there might be some short-term pain for Amazon, the tech giant has already built its own extensive logistics business and could handle more of its own last-mile delivery. Smaller retail rivals, meanwhile, would have to absorb any increased USPS shipping costs.

So would rural Americans, to whom the Postal Service is required to deliver mail at the same rates as urban customers, a memo noted. Rate hikes would also disproportionately hit customers who, because of the pandemic, depend on the Postal Service for prescription drug delivery “at a time when these services are more critical than ever,” the memo added.

And that loss of business would likely lead to massive job losses at the Postal Service itself. That’s based on the assumption that the shipping volume decline would equate to a loss of nearly 56 million bargaining unit work hours and eliminate about 28,000 temporary employee jobs.

The documents seem designed to persuade Postal Service leadership to push back on the president’s efforts to interfere in its business. One memo circulated within the agency, describing the Amazon-USPS relationship, barely mentions the president by name. But it includes a “fact-checking” section that pulls direct quotes from Trump during an April 7 briefing at the White House, and rebuts each point-by-point.

The governing board and then-Postmaster General Megan Brennan sought to use those data and talking points in conversations with Treasury Secretary Steven Mnuchin – who was pushing the Postal Service to raise package rates at Trump’s behest – according to three people involved with the strategy who spoke on the condition of anonymity because they were not authorized to publicly discuss sensitive matters. The leaders thought Mnuchin would restrain Trump if presented with a compelling case against rate hikes.

To Trump’s claim that “they lose money every time they deliver a package for Amazon or these other Internet companies,” the document notes the profit from Amazon’s business and adds that its unprofitability “is tied more closely to its unfunded governmental mandates,” such as delivering to all addresses six days a week and pre-funding its retirement plans.

In addition to the revenue and profit of that business, the documents also show that the Postal Service delivered 1.54 billion packages for Amazon in the fiscal year that ended last Sept. 30. That haul represents about 30% of Amazon’s total volume, according to the documents. In spring, when many of the documents were prepared, the volume of Amazon packages was up 12.6% from the previous year.

And most of Amazon’s packages sent through the Postal Service – 59% – were not shipped at discounted rates, the documents show. Those packages were sent by both the company and the third-party merchants who ship products they sell on the site. Compared to the agency’s other big customers, a document noted, “Amazon is not only our largest customer, but also one with strength and growth, not achieved through heavy discounting.”

The documents, though, show agency workers concerned that the uncertainty about the Postal Service’s future undermines its ability to land the best possible contract with Amazon.

“Amazon is the largest legacy partner and has voiced desire to continue building the relationship. They remain concerned about the risk of a relationship with USPS,” a document laying out strategy for the service’s Parcel Select business noted. It’s unclear what impact the president’s claims ultimately had on the contract negotiations.

The document also laid out fears that rivals, particularly UPS, were ready to seize business that the Postal Service lost.

“UPS has the capability to absorb a majority of USPS-Amazon volume in the near future with limited incremental investment,” it noted.

Sat Sep 19 , 2020
A British insurance marketplace in business since 1871 will pay up to $25 million of wildfire costs in Oregon under the state’s one-of-a-kind wildfire insurance. The policy with Lloyd’s of London calls for the state to pay the first $50 million in costs, then Lloyd’s pays the next $25 million. […] 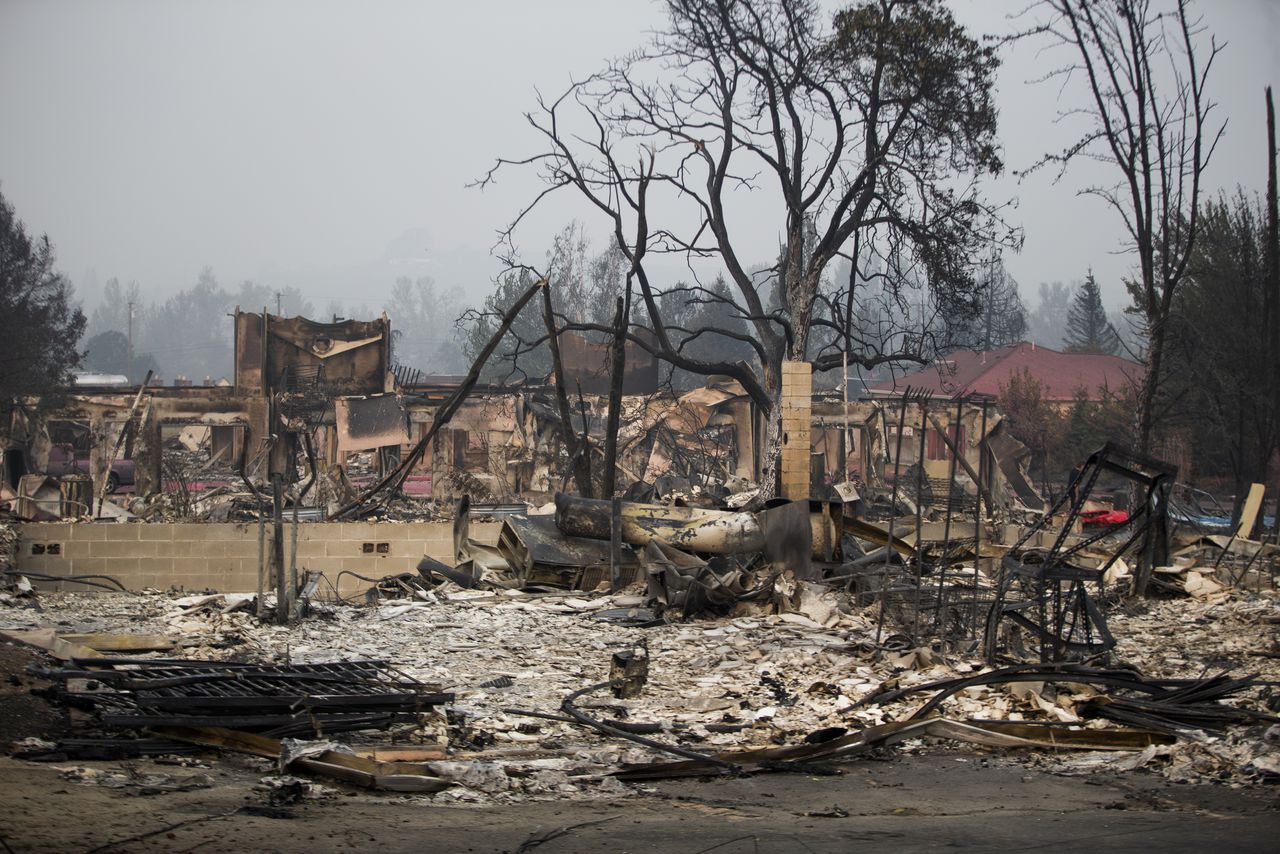