The sculpture came first. Back in 2008, Higgins chef Greg Higgins was preparing to open Piggins, a wood-fired pizzeria built around a large sculpture of a pig bursting through a brick wall. Then the recession hit, and expanding beyond his eponymous farm-to-table restaurant became “out of the question.” Flash-forward 12 […]

Back in 2008, Higgins chef Greg Higgins was preparing to open Piggins, a wood-fired pizzeria built around a large sculpture of a pig bursting through a brick wall. Then the recession hit, and expanding beyond his eponymous farm-to-table restaurant became “out of the question.”

Flash-forward 12 years: After a recent remodel, that pig sculpture now hangs on the wall at Higgins. And the Piggins name graces a new eatery just around the corner — not a wood-fired pizzeria, but an open-air bistro on the Oregon Historical Society’s plaza with a “satellite kitchen” that one might almost mistake for a food cart.

When Gov. Kate Brown banned on-premises dining throughout the state in March, the news sent a shock wave through the Oregon restaurant world. Most of the state’s estimated 183,000 service industry workers were laid off overnight. Many restaurants, including Higgins, closed their dining rooms and kept them closed, preferring to switch to a takeout model rather than reopen when Multnomah County entered Phase 1.

But over the past month or so, several prominent Portland restaurants have gone the same route taken by chefs during that 2008 recession, channeling their menus through food carts. In addition to Piggins, where you can now sit down with a burger and a glass of Oregon pinot gris under the shade of the South Park Blocks tree, the former late-night Cajun/Creole destination Le Bistro Montage has found new life as a cart, while former falafel favorite Garbonzos is back in the cart game after a 15-year hiatus.

Derek Ingwood was only 21 years old when he became the executive chef at Le Bistro Montage, the late-night Portland institution known for its Cajun-spiced mac-and-cheese, leftovers sent home in elaborate foil animals and servers in lab coats bellowing out each oyster-shooter order. And he was only 25 when the restaurant closed for good.

“Once this whole pandemic hit, they said that they were going to close the restaurant for good because there was no end in sight and we were just bleeding money,” Ingwood said of Montage’s former owners. “So I had the idea to keep the name going, keep serving the food and keep some of our core guys employed.”

So Ingwood licensed the Montage name, recipes and intellectual property, then opened Montage ala Cart at the Hawthorne Asylum pod in August. Beyond the restaurant’s popular mac-and-cheese and jambalaya, the cart serves fried artichokes, nachos topped with mac-and-cheese, and po-boy sandwiches. Orders come with small foil roses, a nod to the restaurant’s old foil-wrapped leftovers. Serving raw oysters to-go presented a potential health hazard, so those Montage shooters will have to live on only as a memory.

Fans have followed, with lines often snaking back from the cart toward the pod’s entrance. Still, a busy night at the cart, when Ingwood and his team might ring up 300 customers, doesn’t come close to an average Friday or Saturday at the original Montage, when more than 1,000 people might pass through over the course of a night.

But it’s not just existing restaurants that have jumped in the cart game.

Before opening 2-month-old Farmer and the Beast on Northwest 23rd Place, former Tanner Creek Tavern chefs Jeff Larson and Schuyler Wallace said they were more comfortable with a business model that could keep going should a second coronavirus wave emerge, even if it meant trading away refrigeration space and indoor seating.

“If anything happened that closed dining rooms, eliminated counter service or caused restaurants to be shut back down, the cart would still be a walk-up window,” Wallace said. “People can still get what they want and go.”

”I never thought I’d see the day when a food cart would be the most viable option,” Hwang said. “But now when I see people they’re so glad that we’re open. They take their food and Instagram it back at their house. Who knew putting my food in a box would be the thing that saved me?”

When Brown’s order closing dining rooms landed in March, former Stoopid Burger co-owner John Hunt was just days away from opening his new venture, Union Burger. He thought about pushing his opening date back, but now says he’s glad he went through with it.

“It was busy,” Hunt said. “I kept it kind of low-key, to where it was kind of a surprise, but then the first day we opened it was like, ‘Boom.’ All the restaurants were closed. Food carts were the only thing going.”

The pandemic is even drawing once-prominent Portland restaurateurs back into the game. Fifteen years ago, Allen Levin sold the last location of his falafel bar mini chain, Garbonzos, and focused his attention on Century Catering, the kosher catering company that would typically appear at large events such as the Waterfront Blues Festival, Hood to Coast relay and as many as five bar and bat mitzvahs per weekend.

But big events and corporate catering gigs were among the earliest COVID-19 cancellations. With festivals and other large gatherings on hold in Oregon until there’s a vaccine, Levin decided to revive his old restaurant as a new food cart, hoping to keep his staff employed. At Garbonzos, Levin’s sky-blue truck parked outside the Mittleman Jewish Community Center on Southwest Capitol Highway, falafel sandwiches are the star of a short menu that feels as fresh as it did two decades ago.

“I hope it maintains the level of business that we’re doing, because it’s been strong, even all alone in a parking lot, way up the way,” Levin says. “But I have no point of reference for what carts do.”

As to the future, Levin said the coronavirus will dictate whether catering becomes a viable option again.

“I don’t think we’re going to snap back to the old 300-person bar mitzvahs,” he said. “I can’t see that happening for a long time.”

The Piggins kitchen, built for $50,000 by PDX Cart Builders, serves Higgins’ famed house charcuterie, farm salads and sandwiches by day, then shifts to a more ambitious lineup of mains — grilled hanger steak, a nightly Northwest seafood special — at night. The Piggins burger, with grass-fed beef from Carman Ranch, is served throughout the day.

“From the very first time we saw that space, I just kept thinking of all the great outdoor bistros in France and Italy,” Higgins said. “Why not here? And why does it just have to be crepes or something super simple?”

According to Higgins, Piggins has been earning about $5,000 a day in revenue, at least before the wildfire smoke put a temporary hold on outdoor dining this week.

“That might be considered massive for a food cart, but compared to running a full service restaurant, it’s just barely keeping us above water,” he said.

Visit on a hot day, and you might find regulars with reservations leaning in the shade of the historical society building, waiting as co-owner Paul Mallory rearranges a heavy umbrella to block the sun from one of Piggins’ 16 socially distanced tables. When the rains arrive, Higgins and Mallory hope to continue using Piggins as a pickup point for takeout, including offering a reheat-at-home home version of the meals typically served on Thanksgiving and Christmas, two of the restaurant’s busiest days. Meanwhile, they’re working to reopen the restaurant’s dining room for limited indoor service sometime this fall.

And long-term, they hope to see Piggins serve as the Oregon Historical Society’s outdoor bistro for years to come.

“The energy level from the customers and staff has been a really uplifting experience,” Higgins said. “I’ve been cooking in Portland for almost 40 years, and suddenly we’re getting new people who’ve never heard of us. I think that’s just great.”

Tue Sep 15 , 2020
Soulgood, a plant-based food truck with exclusively vegan offerings, is opening its first brick-and-mortar restaurant in West Dallas. Owner and chef Cynthia Nevels worked in management consulting for 20 years before starting Soulgood. Burgers, “not” dogs, nachos, tacos, and tamales are just some of the different items the eatery offers. […] 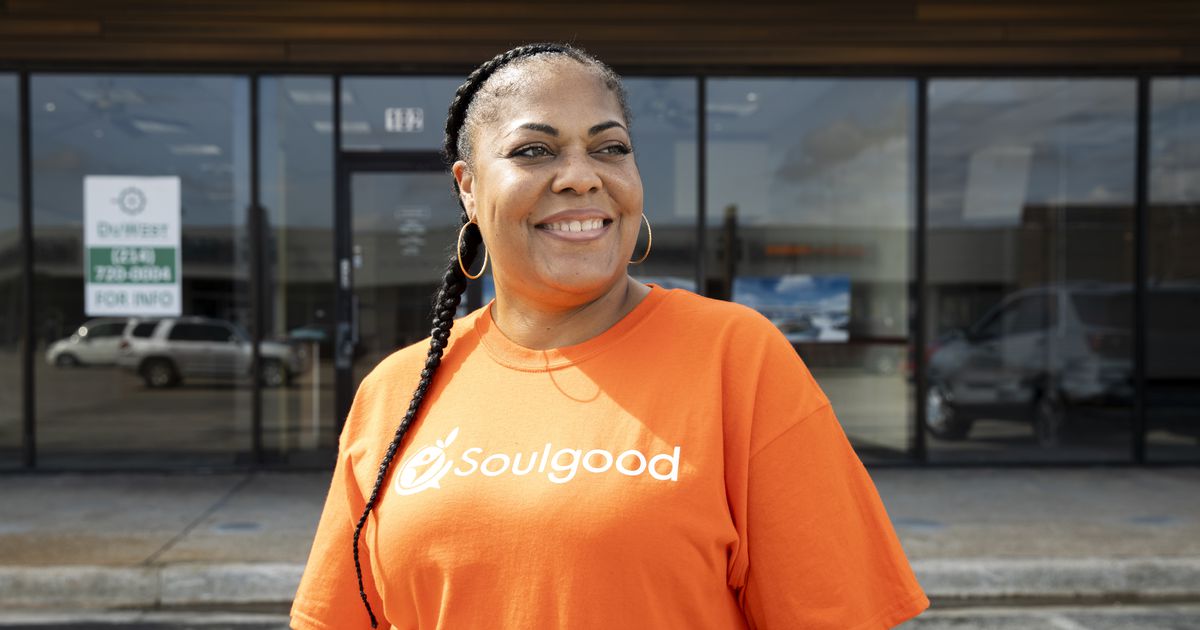