No member of the nine-person PEPA Board of Directors made a motion last Friday (Oct. 9) to enter a reverse auction that would potentially provide money for broadband internet service in underserved areas, and some co-op customer-members were very displeased. “That’s a joke, come on guys,” said Jeannie Hill, one […]

No member of the nine-person PEPA Board of Directors made a motion last Friday (Oct. 9) to enter a reverse auction that would potentially provide money for broadband internet service in underserved areas, and some co-op customer-members were very displeased.

“That’s a joke, come on guys,” said Jeannie Hill, one of some 20 co-op members who voiced their concerns at Friday’s specially called meeting at which the PEPA board considered entering an auction conducted by the Rural Digital Opportunity Fund.

“We’re living in the dark ages,” co-op member Rachel Baldwyn said to the board. “What do we need to do to change your minds?”

In May the board gave director Frankie Moorman permission to enlist PEPA in the National Rural Telecommunication Cooperative, a partnership that helps rural utility providers get the funding, resources, and technology they need to offer members the most current and effective service.

As an NRTC member, PEPA was allowed to participate in the Rural Digital Opportunity Fund (RDOF) Auction, a reverse auction, designed to help un-served and underserved rural communities. PEPA officials anticipated trying to procure as much of a $12.3 million purse as possible for broadband. Maps developed by the Federal Communications Commission helped auctioneers decide which census blocks were most in need. Those included portions of circuits in Algoma, Longview, and Randolph.

At the Oct. 9 meeting, Moorman said the board was concerned about stipulations attached to the ARDOF money, including that a 15 percent penalty would be levied if PEPA won the auction and didn’t spend all the money, as well as that the entire network of broadband service would have to be built out in six years.

The deadline for submitting a bid in the ARDOF auction is Oct. 29.

The PEPA board voted unanimously on April 2 not to offer broadband service to co-op members. The board commissioned three feasibility studies which indicated that providing the service wasn’t economically viable. The bottom-line, according to Moorman, is that PEPA would need $23 million to start installing fiber cable, and a reliable commitment from no fewer than 43 percent of PEPA customers. That would mean that 7,121 would have to keep the service for 20 years, even if other carriers came in and offered the service cheaper.

The ARDOF auction was one option the PEPA board considered in its ongoing efforts to provide broadband, Moorman said, but its overriding commitment remained protecting the cooperative and providing reliable, affordable power. The board felt that applying for ARDOF money, without the certainty of supplemental funding, might jeopardize the power company.

At the Oct. 9 meeting several co-op customer-owners said they weren’t convinced by the board’s reasoning.

“How are we (PEPA customers) uniquely different?” asked Jeannie Hill, saying that numerous other cooperatives throughout the state offer broadband.

“What do we lose by applying?” asked Kellie McLellen, a teacher who said she lived less than five miles from the Toyota plant and didn’t have reliable internet service. “You say that you’re serving our best interest, but nothing we want seems to make a difference,” said McLellen.

David Tranberg was confounded by the board’s decision.

“Is there not a single voter who will make a motion to continue pursuing this money for which you’ve already applied?” asked Tranberg.

Jackie Courson, a member of the group PEPA Owners for Change, said he thought the board had a negative outlook.

“From our perspective, it’s been the total opposite of clear communication from ya’ll,” said Courson. “I’ve talked to the managers of nine cooperatives from around our area. I encourage ya’ll to go back and look at the information and get us involved. Blaming us (customer-members) is not the way to do it. This is not going to happen if we have the attitude that we can’t do it.”

Vision was the primary element lacking in the board’s approach, Courson added.

Several customers praised PEPA’s reliability and quality service and admonished the board to find a solution for offering broadband.

“We need you guys to lead,” said Joy Deason. “Without this service, many people don’t have the quality of life they deserve. If you offer a broadband service like you do for power, you’ll beat anyone. We believe in PEPA.”

No member of the PEPA board opposed broadband, Moorman said. As eager as they were to provide the service, they hadn’t seen a solution that reassured them the power company would not be in jeopardy should the venture fail. PEPA provides service to 16,400 meters, and keeping the lights on is their top priority, Moorman said.

PEPA Board President Larry Parker told those gathered that he’d spoken with Sen. Roger Wicker on Friday, as well as with Sen. Cindy Hyde-Smith and representatives for Rep. Trent Kelly. He also spoke with Gov. Tate Reeves.

“I asked if anything was in the pipeline, if any money might be available through the CARES Act or other resources,” said Parker. All those with whom he spoke expressed concern but were unable to make definite commitments, Parker said.

Moorman closed the meeting by reassuring customer-owners that the board was committed to providing broadband service, as long as the power company wasn’t in danger.

“I understand about fiscal responsibility, and I’m proud to be here at PEPA,” said Moorman. “We’ll always break our backs bringing ya’ll the most reliable and affordable service possible. Providing broadband would be the biggest thing PEPA has even undertaken. If and when we find a way to do it, it will be the best service you’ve ever had.”

Wed Oct 14 , 2020
Long Beach Police Chief Robert Luna, shown in 2014, announced in June that an officer who posted photos on social media amid the George Floyd protests has been “relieved from employment.” (Cheryl A. Guerrero / Los Angeles Times) As a young cop in Richmond, Calif., in 2008, Ben Murdoch made […] 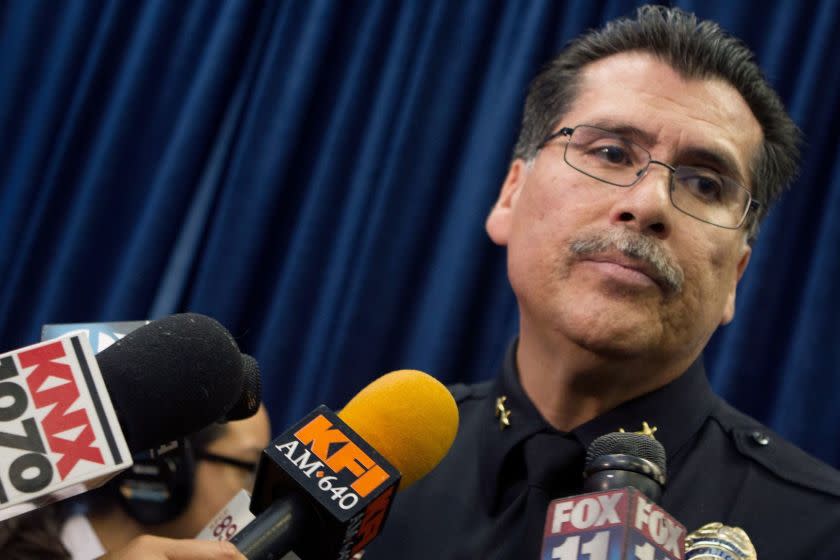