There were other factors. Profitability for insurers depends primarily on the number of claims for current policies and on the value of the assets that back up insurance liabilities — and stock markets rose in the quarter. Strong equities also benefited investment-­management firms, and brokerages experienced increased corporate debt issuance […]

There were other factors. Profitability for insurers depends primarily on the number of claims for current policies and on the value of the assets that back up insurance liabilities — and stock markets rose in the quarter. Strong equities also benefited investment-­management firms, and brokerages experienced increased corporate debt issuance as companies raised money to survive the pandemic.

IE’s survey covers the results for all publicly traded financial services firms for fiscal quarters ending between May 31 and July 31. That’s the second quarter for most companies, but the third quarter for the banks.

Of the 41 companies in IE’s survey, Brookfield Asset Management Inc. (BAM) has the most direct exposure to the pandemic’s economic impact. The firm operates in a variety of sectors, including infrastructure, real estate and power generation. About 75% of its businesses are backed by contractual cash flows, but the remaining 25% — which includes hotels, retail centres and real estate rentals —were hit hard, with some reporting no income for the quarter. As a result, BAM reported a US$1.5 billion loss, a negative swing of US$2.2 billion from net income of US$704 million a year earlier.

The banks also took a hit. Anticipating the carnage from the 11.5% plunge in Canada’s real GDP in the second quarter of this year, the 12 deposit-taking institutions in the survey increased loan-loss provisions by a combined $7 billion. That was on top of an $11.7-billion increase in provisions in the previous quarter.

Net income for the 41 companies dropped by 26.9% from a year earlier. Excluding the banks and BAM, however, the decline was just 1.4%. (These figures exclude Great-West Lifeco Inc. [GWL] and IGM Financial Inc., the results of which are consolidated with Power Financial Corp.’s).

Only two firms increased their quarterly dividends: Canaccord Genuity Group Inc. raised its payout to 5.5¢ from 5.0¢, and TMX Group Ltd. increased its to 70¢ from 66¢.

Here’s a look at the sectors in more detail:

The loan-loss provisions in the past two quarters look huge by historical standards. Even in 2009, in the midst of the global credit crisis, the figure barely exceeded $3 billion in a quarter.

However, Robert Colangelo, senior vice president at DBRS Morningstar Inc., says banks have changed how they calculate loan-loss provisions. “They used to just put aside money for loans using an incurred loss model, which typically triggers a provision when a borrower becomes delinquent and misses payments,” he says. “Now they calculate what’s likely to happen to their entire loan portfolios under a number of economic scenarios and inputs. Under the current circumstances, this results in higher provisions, but less risk of unexpected negative surprises.”

Colangelo expects loan-loss provisions to normalize during the rest of this year yet remain higher than in 2019. He adds that the Big Six banks’ asset quality remains “sound.” But loan growth will be challenging into 2021, given the economy’s uncertain outlook.

Colangelo notes that Bank of Montreal and Toronto-Dominion Bank are vulnerable because of their substantial exposure in the U.S., where the pandemic isn’t under control. Bank of Nova Scotia is exposed to what happens in Latin America and the Caribbean, regions that began to feel the impact of Covid-19 later than the rest of the world did.

Accord’s earnings rose by 120.2% vs Q2 2019, thanks to a $3-million loan-loss recovery and a Covid-related income tax recovery, according to Accord’s Q2 2020 financial report.

In contrast, ECN’s 84.5% drop in net income was due to a $4.4-million loan-loss provision. The company doesn’t normally put money aside for loan losses.

E-L Financial Corp. had a 1,073.8% increase in earnings. The company has substantial corporate investments as well as insurance operations. Thanks to stock market gains, the fair value of investments rose by $1.3 billion in the quarter vs a gain of $204 million in Q2 2019. This was only partially offset by an increase in net claims and benefits to $941 million from $472 million in its insurance business.

Fiera Capital Corp., Guardian Capital Group Ltd. and Sprott Inc. reported substantial gains in net income. Guardian’s and Sprott’s were due to gains in the fair market value of investments. Fiera’s increase was from a very low base in Q2 2019.

With stock markets improving, Q2 2020 was a good quarter for Canaccord and Oppenheimer Holdings Inc. GMP Capital didn’t benefit because it sold its capital markets division. The firm is in the process of acquiring the rest of the shares of Richardson GMP that it doesn’t already own from Richardson Financial Group Ltd.

Dundee benefited from equity gains in the quarter for its mainly resource-based investments. 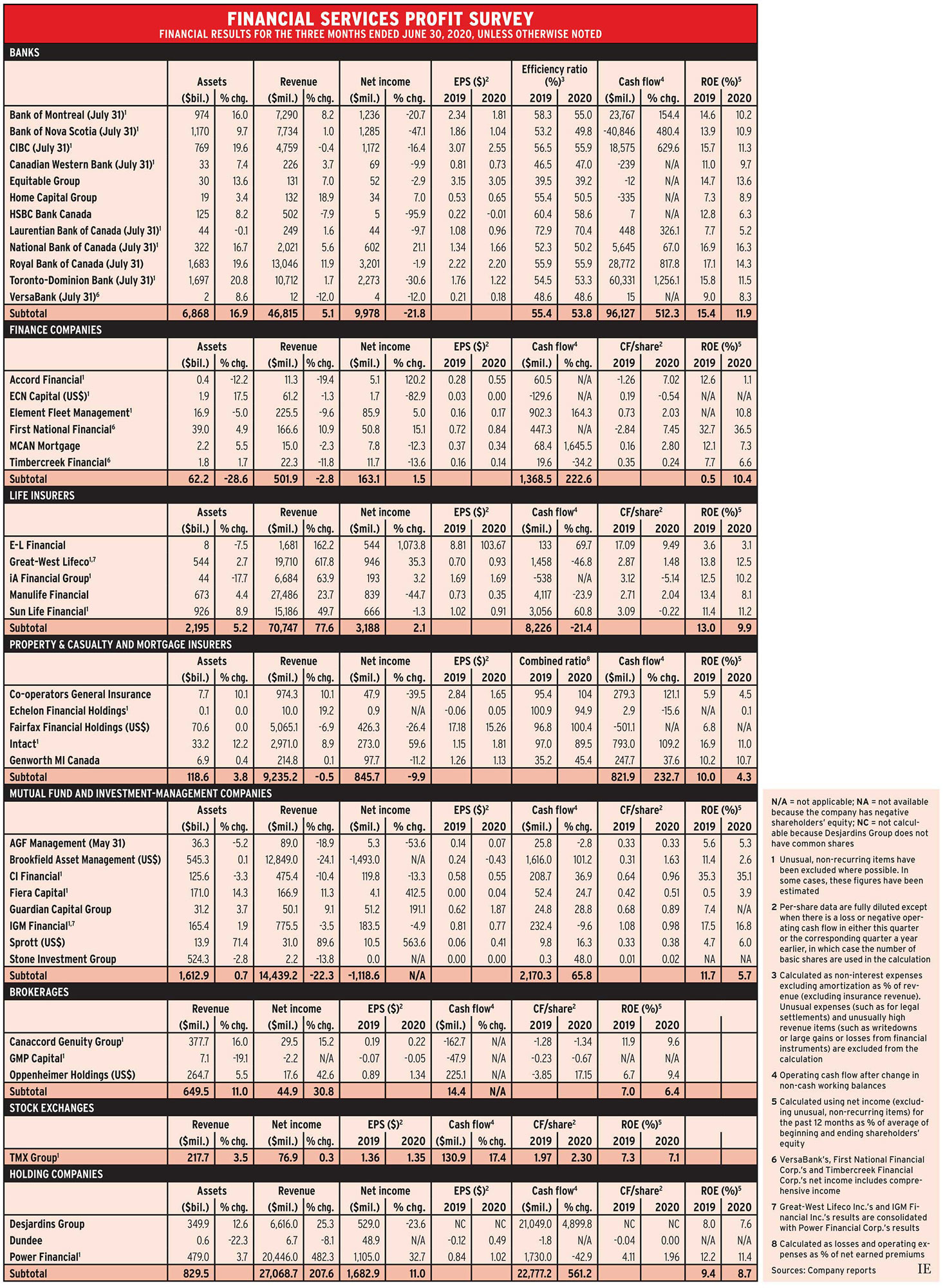 Mon Sep 21 , 2020
The MarketWatch News Department was not involved in the creation of this content. Sep 07, 2020 (The Expresswire) — Global “Bone Staple Market” 2020 report consists of important factors such as the latest trends, performance drivers, key players, revenue, growth rate and volume sales, and consumer insights. The report Bone […]