The Tencent Holdings Ltd. WeChat app is displayed in the App Store on a smartphone in an arranged photograph taken in Arlington, Virginia, on Friday, Aug. 7, 2020. Andrew Harrer | Bloomberg | Getty Images WASHINGTON — A U.S. judge in California halted the Trump administration’s ban on downloads of […]

The Tencent Holdings Ltd. WeChat app is displayed in the App Store on a smartphone in an arranged photograph taken in Arlington, Virginia, on Friday, Aug. 7, 2020.

WASHINGTON — A U.S. judge in California halted the Trump administration’s ban on downloads of the Chinese-owned app WeChat early Sunday.

The move blocks the Commerce Department from forcing Apple and Alphabet’s Google to remove Tencent Holding’s WeChat for downloads by Sunday evening.

U.S. Magistrate Judge Laurel Beeler in California said in an order that WeChat users who filed a lawsuit “have shown serious questions going to the merits of the First Amendment claim, the balance of hardships tips in the plaintiffs favor.”

Beeler’s preliminary injunction also blocked the Commerce order that would have barred other transactions with WeChat in the United States that could have degraded the site’s usability for current U.S. users.

The U.S. Commerce Department and the White House did not immediately comment.

The Commerce Department announced Friday morning that it will ban U.S. business transactions with Chinese-owned social apps WeChat and TikTok on Sunday.

Commerce Department officials who spoke with reporters on the condition of anonymity Friday explained the next steps for WeChat users in the United States.

“We expect there may be some usability for users in the United States with the app but given the fact that WeChat is heavily reliant on content delivery services in the United States to optimize the app and make sure that content can be delivered with the necessary speeds,” a Commerce Department official said.

“Users will experience some dysfunction and latency to the point where there will be an outage or a message or something will timeout. So, we do expect it may be usable but it may not be particularly functional after Sunday,” the official added.

Commerce Department officials also said on a call with reporters that they were preparing for a long legal battle.

On Saturday, President Donald Trump said he approved a deal in which Oracle and Walmart will partner with the viral video-sharing app TikTok, allowing the popular app to avoid a shutdown.

The Trump administration said in July, amid deteriorating relations between Washington and Beijing, that they were looking at banning TikTok as well as other Chinese social media apps, citing national security concerns.

Secretary of State Mike Pompeo said in August that the administration was scrutinizing TikTok as akin to Chinese state-backed tech companies Huawei and ZTE, which he has previously described as “Trojan horses for Chinese intelligence.”

The nation’s top diplomat also added that the State Department would work with the Commerce Department as well as the Defense Department to limit the ability of Chinese cloud service providers to collect, store, and process data in the United States.

Sun Sep 20 , 2020
With the rise of privacy regulations where customers choose to turn off tracking cookies and pixels, the only way for businesses to gain consistent customer insights and measure how they are spending their marketing dollars online is to use tracking links. CampaignTrackly is an automated platform that replaces manual tracking […] 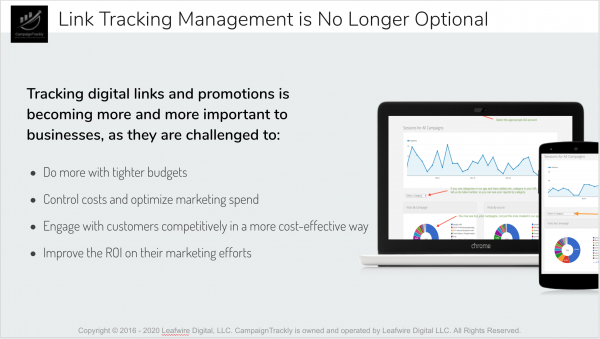