Joe Biden grieves. His voice thickens; his eyes mist over. © (Associated Press) Joe Biden was sworn in as a U.S. senator in 1973 in a hospital room where his sons recovered from a car crash that killed Biden’s wife and daughter. (Associated Press) He recounts his life’s many tragedies […]

Joe Biden grieves. His voice thickens; his eyes mist over.


He recounts his life’s many tragedies — death, near-death, crushing political defeat — in a way that makes them seem not only palpable but still raw.

It’s not just campaigning-as-therapy, though it sometimes feels that way. Rather, the torment is central to Biden’s candidacy, a mix of agony and empathy unlike any since 1992, when the emotive Bill Clinton won the White House telling distressed voters he felt their pain.

The difference is the subtext to Biden’s suffering, a message befitting these angst-ridden times: He not only feels America’s pandemic- and economic- and injustice-induced pain but relates by having experienced as much, if not more, pain himself.

A current TV ad recounts how Biden was sworn in to the Senate at the bedside of his two small boys, hospitalized after a car crash that killed his wife and infant daughter. One of those boys, he says, was diagnosed 40 years later with terminal brain cancer.

Biden’s biography is a litany of trials, which served as the centerpiece of the character study that was last month’s Democratic National Convention. A debilitating stutter. Burying a wife and two children. Brain aneurysms that nearly killed him and threatened to leave him permanently disabled. Two failed runs for president.

The comparison with President Trump, Democrats say, is stark.

“He knows struggle, hardship, perseverance and has come out the other side,” said Jim Margolis, who produced campaign advertising for President Obama and Vice President Biden and strategized for Biden’s running mate, California Sen. Kamala Harris, in her White House bid. “Biden’s ability to talk to people simply and compassionately, to listen as well as speak, to credibly say, ‘I’ve been there, too’ is a particularly powerful contrast.”

By placing so much emphasis on biography — or personal narrative, as political scholar Robert Spitzer calls it — Biden has taken up a tradition that has been at the center of presidential campaigning from the start.

George Washington was celebrated as the father of the country, though he didn’t need any such glorification to be chosen, sans opposition, as the first president. Andrew Jackson used his frontier upbringing (back when the Carolinas were the frontier) to campaign as the candidate of the common man.

Theodore Roosevelt’s charge up San Juan Hill turned him into a national hero and helped him become, at the time, the youngest president in American history. Obama presented his ancestry as the son of a black father from Kenya and white mother from Kansas as an exemplar of the nation’s diversity and hopes for greater harmony across racial lines.

Spitzer, a political science professor at the State University of New York in Cortland, said a compelling biography can humanize candidates and make them more relatable. “People like to vote for someone they understand,” said Spitzer, who has written several books on the presidency, “and someone they feel they have a connection to.”

A biography can serve also as a kind of road map, suggesting a path forward based on where a candidate has been.

“Issues come and go. Crises rise and fall. What a biography does is tell you what the caliber of a person is and their true character,” said Don Sipple, who produced advertising for Republican Bob Dole’s 1996 presidential campaign. “It’s basically about building trust based on what they’ve done in the past and what you can expect from them in the future.”

But personal mettle and a captivating life story go only so far. Context — which is to say, the setting in which an election is held and the things that voters prioritize as they cast their ballots — matters greatly.

Dole, who bore his crippling World War II wounds with distinctive grace and dignity as he rose to power on Capitol Hill, lost to Clinton because the economy was good and Americans saw no need for change. Four years prior, Clinton — who took steps to avoid serving in the Vietnam War and was dogged by allegations of womanizing — defeated President George H.W. Bush because the economy felt rocky and voters believed that Bush, though an upstanding family man, was too far removed from their struggles.

“The presidency is not a reward” for personal nobility or a lifetime of benevolence, said Paul Begala, a former Clinton campaign advisor. To resonate, he said, a candidate’s biography “has to be connected up” with a set of issues that show the candidate understands the challenges voters face in their own lives.

“The whole power of Joe riding the rails three to four hours a day is not simply to say he’s a person of good character,” Begala said, referring to Biden’s daily commute between Washington and Delaware as a senator. “It shows he gets it. He knows what it’s like to be sitting in traffic on the 405 [freeway] because you’ve got to get home to put a child to bed.”

Biden’s soul-baring has been one of the most striking aspects of his campaign.

While long styling himself as regular, approachable Joe, the Democrat has been more open about his life and loss than he was during two previous tries for president: one, at age 44, as the tribune of a restless generation; the second, 20 years later, as a silver-haired lion of the Senate.

Some of that, suggested Delaware Sen. Chris Coons, is the perspective that comes with age and wisdom. Some of it reflects today’s Oprah-esque culture of personal confession, though he pointed out, “We’re not electing Dr. Phil here; we’re electing someone who’s going to be the next president of the United States.”

“This isn’t just that Joe Biden has had some unique tragic experience in his life,” said Coons, a fellow Democrat who has known Biden for more than 30 years and holds his former Senate seat. “It’s that he’s strong, he’s resilient” and has the experience to help “tens of millions of other Americans who are getting through hard times.”

Politically, there is something else. Biden’s grief-soaked past and on-his-sleeve emotions serve to distinguish the challenger from his rival, a president notably stinting in his public displays of compassion. Not surprisingly, polls have consistently shown Biden leading Trump by double digits when voters are asked which candidate cares more about the needs of ordinary people, or “people like you.”

The president has apparently taken note. In his prime-time convention speech, Trump mocked his Democratic opponent, saying workers who lost their jobs as a result of unfair trade deals “didn’t want Joe Biden’s hollow words of empathy. They wanted their jobs back.”

Trump pronounced “empathy” as though it was an epithet, grating as it passed through the president’s lips.

It is a word Biden lives by and a suggestion of solace that, he hopes, will help win him the White House on his third try.

Watches, iPads in spotlight at event, but no new iPhones

Wed Sep 16 , 2020
By Michael Liedtke | Associated Press SAN RAMON — Apple introduced a cheaper version of its smartwatch, its latest attempt to broaden the appeal of its trend-setting products while many consumers are forced to scrimp during the coronavirus pandemic. The scaled-down Apple Watch follows on the heels of a budget […] 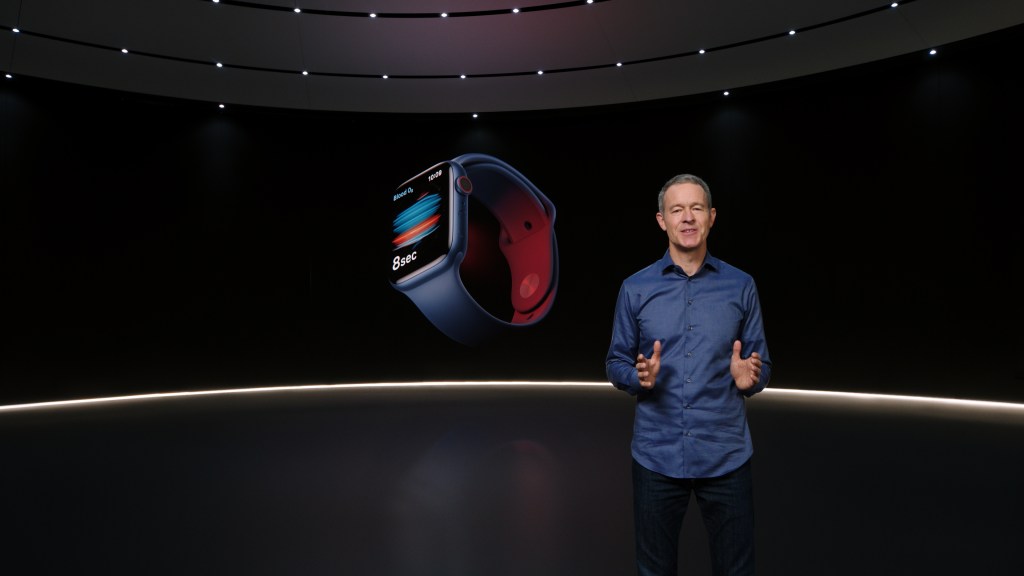