Brian Westerholt / Associated Press Las Vegas Raiders quarterback Derek Carr (4) celebrates after his defense stopped the Carolina Panthers on fourth and one during the second half of an NFL football game, Sunday, Sept. 13, 2020, in Charlotte, N.C. By Mike Grimala (contact) Sunday, Sept. 13, 2020 | 1:13 p.m. […] 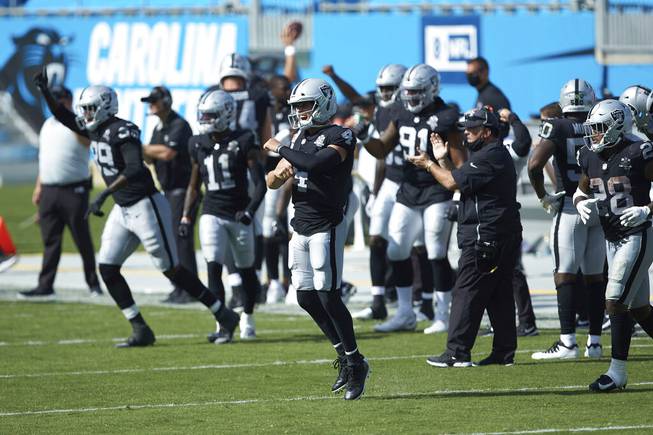 Las Vegas Raiders quarterback Derek Carr (4) celebrates after his defense stopped the Carolina Panthers on fourth and one during the second half of an NFL football game, Sunday, Sept. 13, 2020, in Charlotte, N.C.

The Raiders opened their first season in Las Vegas with a 34-30 win at Carolina, but getting to 1-0 wasn’t easy. It took a gargantuan effort from running back Josh Jacobs (25 carries, 93 yards, three touchdowns) to complete a game-clinching drive in the final minutes, and the Raiders’ shaky defense came up with a stop when they needed it most.

A quick look at how Las Vegas managed to escape Week 1 with a road victory:

Let’s be real, the Carolina Panthers are not going to set scoring records this season. It’s a bottom-tier roster helmed by a low-ceiling quarterback and led by a head coach who was calling his first NFL game on Sunday. This should have been an advantageous matchup for the Raiders’ new and (hopefully) improved defense.

That’s not how things played out. Despite the big fourth-down stop to seal the win late in the fourth quarter, there were glaring warning signs throughout the game. The Panthers scored on each of their four first-half possessions, and there were plenty of defensive miscues to blame. Some were new struggles (second-year safety Johnathan Abram whiffing completely on a Christian McCaffrey touchdown run) and some were familiar (linebacker Nicholas Morrow getting flagged for a long pass-interference penalty while covering McCaffrey down the field).

In the first half, the defense did not record a single sack or quarterback pressure. Second-year defensive end Clelin Ferrell? Stonewalled on every play. Much-hyped free agent signing Maliek Collins? Invisible in pass-rushing situations. Sophomore 10-sack man Maxx Crosby? Tied up by blockers all half.

Things got better after the break. The Raiders recorded a stop on Carolina’s first possession after the half, and their second drive was ended when Las Vegas defensive end Carl Nassib and tackle Maurice Hurst combined for a third-down sack of Teddy Bridgewater. Those stops allowed Las Vegas to build some breathing room.

Rookie cornerback Damon Arnette held his own for most of the game, but in the NFL it only takes one slip-up to put your team in jeopardy. Arnette learned that lesson in the fourth quarter, when he bit on a double move and allowed Robby Anderson to race past him for a 75-yard touchdown catch to give the Panthers a 30-27 lead.

Jacobs eventually bailed out the defense, but the Raiders are going to need better play from the defensive line, the linebackers and the secondary if they intend on competing for a playoff spot this season.

While the defense gave up the lead multiple times, the Raiders were always able to turn to their best player, running back Josh Jacobs, to save the day. He only averaged 3.7 yards per carry for the game, but he was able to shoulder the load and pick up key first downs at every juncture. And after Jon Gruden spent most of training camp talking about the need to convert in goal-to-go situations, Jacobs came through with three touchdowns, including the game-winner in the fourth quarter.

Jacobs was electrifying as a rookie last year, and the good news for the Raiders is that he looked even better on Sunday. Jacobs talked about his desire to get more involved in the passing game in 2020, and he did that in Week 1, pulling down four catches for 46 yards.

Jacobs appears to be evolving into a true all-purpose star running back, and by giving him 25 carries and six targets in Week 1, the Raiders are clearly building their offense around him. It all added up to a win on Sunday.

There was a lot of excitement around Las Vegas’ rookie wide receivers heading into the game, and Henry Ruggs flashed his potential by leading the team with 55 receiving yards.

Ruggs only caught three balls, but one of them was a 45-yard deep crosser that set up Las Vegas’ first touchdown. His elite speed was evident on the play as he pulled away from coverage with ease, and Derek Carr hit him in stride. Those are the kind of game-changing plays the Raiders want from Ruggs; they also got the ball in his hands on a pair of end-arounds, which he took for 11 total yards.

An apparent leg injury forced Ruggs to exit in the second quarter, and while he returned in the second half he didn’t get another touch.

The team’s other rookie wideout, Bryan Edwards, caught one pass for nine yards.