The vice president of communications for the iconic Harlem, New York, restaurant Sylvia’s warned that New York City restaurants being allowed to open for indoor dining at 25% capacity amid the coronavirus pandemic won’t “cut the bill.”

“I know that we’re going to be fine, however, 25% for a lot smaller restaurants is not going to cut the bill, not when you have those looming commercial New York real estate to pay,” Tren’ness Woods-Black, the granddaughter of the late Sylvia Woods who founded of the soul food restaurant, told “Mornings with Maria” on Monday.

New York Gov. Andrew Cuomo’s announcement Wednesday that New York City restaurants may open for indoor dining at 25% capacity beginning Sept. 30 comes with a laundry list of regulations on how dining rooms may be reopened and came after restaurant owners warned of layoffs and closures with colder weather on the horizon.

“We are definitely New York strong and everyone’s trying to keep a positive attitude,” said Woods-Black, of the Harlem landmark serving Southern comfort food since 1962.

“As for the restaurant, thankfully we have our outdoor seating and our takeout and delivery is doing very well, but for a lot of folks, that’s not the case and nor will it be the case.”

“We’re anxiously, anxiously waiting to see how the whole 25% capacity is going to go,” she continued.

Woods-Black said she is “very thankful that we’ve been able to join the rest of the state by allowing indoor dining,” even at 25% capacity, but noted it “is going to be tough winter for most.”

She acknowledged that it will “definitely” be a big test.

On Monday, Woods-Black outlined some of the changes that have been made to the restaurant to adapt to the current situation.

“We have already started making investments to make sure that we are in compliance and trying to make things as streamlined as possible,” she explained. “We’ve introduced takeout windows so that limits the traffic coming into the restaurant.”

Woods-Black said the restaurant’s online delivery partners have their own window and customers have a different window they can access to pick up their takeout orders.

“We’ve also been working on our filtration, our air, HVAC systems just to make sure that our guests and our staff family feel comfortable,” she added.

Sylvia’s saw an increase in donations and revenue from new customers in June following calls to “buy Black” after the death of George Floyd, a Black man, in Minneapolis police custody, Reuters reported, adding that the increase didn’t help the landmark establishment turn a profit amid the coronavirus pandemic.

The pandemic reportedly limited the restaurant’s operations and forced the Harlem establishment to lay off most of its staff and slash revenues.

While the restaurant industry is expected to take two to three years to bounce back to pre-COVID-19 revenue levels, Woods-Black pointed out that it would take even longer for spending among Black Americans to return to those levels, according to Reuters.

GET FOX BUSINESS ON THE GO BY CLICKING HERE

Reuters reported, citing city data, that Black Americans make up 22% of New York City residents but only account for 2.1% of business owners.

Restaurants need us, and we need them

Tue Sep 15 , 2020
I was saddened to read that nearly 23 percent of Massachusetts restaurants have been forced to close due to the coronavirus pandemic (“Many restaurants have closed. It’s just the tip of the iceberg.” Page A1, Sept. 13). The statistic is staggering and means tremendous economic pain and the loss of […] 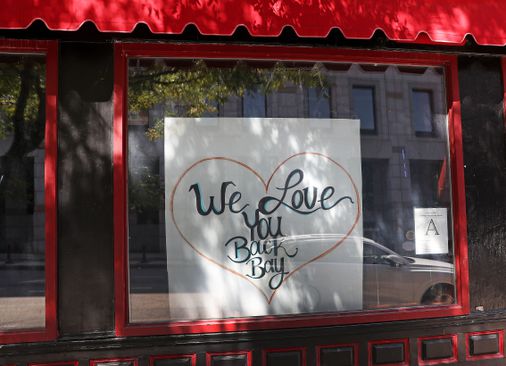