Photo: Courtesy of the author When you move frequently from one rental property to another, you become accustomed to a certain standard of pre-installed furniture. Rooms will often be filled with an unnecessary number of tables, side-tables, cabinets and wardrobes – all clashing, bulky, worn down, sticky after decades of use. […]

Photo: Courtesy of the author

When you move frequently from one rental property to another, you become accustomed to a certain standard of pre-installed furniture. Rooms will often be filled with an unnecessary number of tables, side-tables, cabinets and wardrobes – all clashing, bulky, worn down, sticky after decades of use. Elsewhere, you might find a lamp in such a state of disrepair that the British Heart Foundation would refuse to collect it.

The scale of grotesquely designed interiors in rentals is wide-ranging: some are just about habitable, if adorned with enough fairy lights and carefully-adhered picture frames, and some are just awful, forcing you to question the humanity of whichever person designed it.

During my recent move from one student property to another, for example, the ceiling light in my new bedroom caught my eye.

This is the light you see when you wake up in hell after dying. I fear looking directly up into it in case it’s actually a portal into a Victorian ghost’s mouth. This udder-shaped, lopsided monstrosity is so foul, there’s only one kind of person who could possibly install it and think, ‘Yeah, that looks good.’ That person is a landlord.

We all know landlords are greedy and lacking basic human empathy to the point they will merely make jokes about the literal mushrooms growing in your room, rather than doing anything about it. But what happens when you delve beyond the part of a landlord that refuses to repair black mould for months out of sheer laziness, and into their interior-design psyche? We’re about to find out.

Here is a selection of interior design choices, made by landlords, that renters across the UK currently are currently living with:

There is an unspoken line within this list, marking the difference between “landlords behaving inexcusably but still, possibly, somewhere within the realm of logic” and “landlords who, after years of existing as social parasites, have become something other than human, and are now taking it out on their tenants via a completely unhinged taste in home furnishings”.

That line is in fact not a line, but a silver circle, and there are seven of them here, each containing a promotional photograph of a chair.

This is the first – but most certainly not the last – piece of wall art on this list. It’s one thing to purchase images of single food items, enlarge them to the size of a small car and then stick them all over the walls of a Travelodge, but it is quite another to deem these pictures appropriate decoration for a living, breathing human being’s home.

I’m going out on a whim here and suggesting that this is the haunting work of a lettings agency, as opposed to a landlord. Surely no one acting alone could have the gall to install such a canvas in someone’s home. No, this is the work of a gaggle of Burton-suited, Superdry-booted estate agents, egging each other on in the back room of an off-brand Foxton’s as they attempt to find The Worst Stock Photo In The World to decorate their newly acquired three-bed terrace. 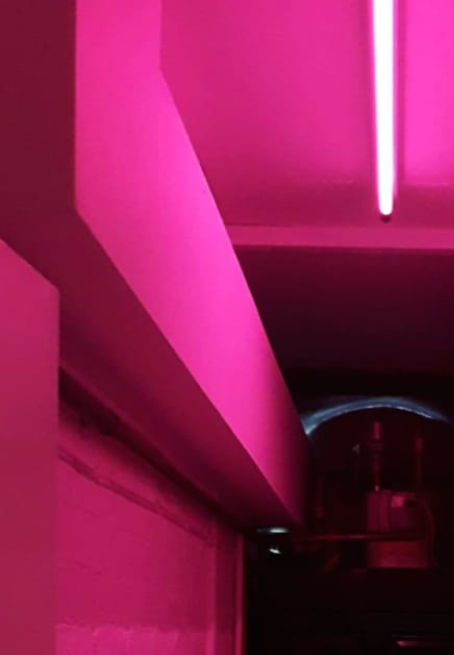 Strip lights are typically found in dentists, schools, supermarkets, university halls and the corridor in nightclubs that leads to the toilets. They are practical, but entirely devoid of joy. Nothing says “this place will never truly feel like home” like a strip light in a living space. So far, so landlord-appropriate.

What, then, is so interesting about this particular strip light specimen? Well, it is fucking bright pink. This landlord said “this place will never truly feel like home, but if you install a sound system loud enough, you might be able to make it feel like a pretentious nightclub”.

The Sisterhood Of The Travelling Sheep

Where did they come from? Where are their faces and their limbs? When, if ever, will their journey end? It is not for the tenant to say – only to observe, and to keep hanging in the same place for the duration of the tenancy or face a hefty deposit deduction.

Remember when you were 13 and you wanted to recreate Banksy’s “Girl with Balloon” in spray paint on your bedroom wall? Remember how your mum said, “Absolutely not, because it will be a fucking nightmare to paint over when you get sick of it, which will be almost instantly, because it is fundamentally ugly to look at”?

The landlord who installed this monstrosity is your former self, a petulant teenager with too much power, shouting, “Oh, you want your living space to be plain and customisable? Well, too bad, because this wall piece was installed during the Unexplainable Floral Trend Boom of 2009 and, owing to the uneven exposed brick underneath, is going to be a lot of effort for me to paint over, and you really need somewhere to live, don’t you. The pain of housing uncertainty is becoming too much to bear, and it’s either this or a 3x3m studio in a repurposed warehouse two hours away from your workplace, and you don’t want that, obviously, so that’ll be an £800 deposit, please and thank you.”

Upon first fleeting glance, this appears to make some level of sense. It is a ceiling light with a jar attached to it, as a makeshift lampshade; the entrepreneur’s chandelier. It is an absolutely rancid thing to look at, but it is feasible that whoever installed it had logical intentions.

Then, as you look closer, you notice more: the wire is weirdly long, and has been bent haphazardly. The lightbulb is nonexistent, there is only wire. In this rented house, there is a long, aged, bendable wire hanging clinically from the ceiling. Who would want this? Who would even have a use for it? Is it some kind of hook from which one can hang meat? There is a jar that has been sellotaped to the end of the wire, yes, but why?

This installation raises more questions than it answers.

What kind of terrible day does a person have to have to not only hang this painting in a living space, but to then inflict it upon tenants who are paying to live there?

Surely some kind of major life crisis had just occurred when this artistic decision was made. Maybe it was hung in the property on the day a messy divorce was finalised. ‘Fine,’ the landlord thought to himself, “if Carol is so intent on calling me a ‘fucking clown’ in front of the judge, fine, I’ll be a fucking clown.”

“It’s art, though,” I hear you cry, “and art is subjective!” Yes, art is subjective, but it is also an excellent judge of character – a way to see into a person’s soul, which in this case clearly does not exist.

All photos courtesy of the author.

How the Best New Restaurants of 2019 Are Faring Now

Wed Sep 30 , 2020
Then March came. A tornado hit Nashville on March 3; luckily we weren’t affected but many restaurants within a block of us were. We had to close because we lost power. A few days after we came back for service, on March 15, the mayor held a press conference about […]