During McDonald’s
Q2 earnings call in late July, CEO Chris Kempczinski said the chain had “amassed a sizable marketing war chest” for the latter part of 2020.

We now have a good idea of just what is inside that chest: powerhouse celebrity partnerships and new, wildly popular menu items.

The onset of COVID-19 in March and April forced chains to halt their marketing plans entirely or shift them to more appropriate campaigns such as free delivery for families hunkered down together. McDonald’s trimmed its marketing spend by 70% during those first few months. It certainly wasn’t the only brand pulling back, and the general quiet of the space was particularly noteworthy for a quick-service restaurant segment that otherwise plows through full marketing calendars at a dizzying pace.

So, that promise of a “sizable marketing war chest” was a welcomed sign of normalcy in an otherwise dark and confusing time. Kempczinski said McDonald’s will not only reinvest the funds from the 70% that was paused, but will also invest an incremental $200 million in marketing spend across both its U.S. and international markets to accelerate recovery. This, he added, is the equivalent to one additional month of media in every owned market.

Fast forward about a month from those statements and we have the Travis Scott effect. McDonald’s launched a limited time “Travis Scott Meal” (Quarter Pounder with cheese, fries with barbecue dipping sauce and a Sprite) in early September–the first time in 30 years the chain has named a menu item after a celebrity. (The first was Michael Jordan in 1992.)

The campaign was so successful, McDonald’s experienced a shortage of its signature Quarter Pounders. For astute pop culture aficionados, this probably wasn’t a major surprise. Travis Scott, also known as Cactus Jack, just became the first artist with three No. 1 debuts in one year on the Billboard Hot 100. He has a bevy of BET Hip Hop, Teen Choice, Soul Train, NAACP Image, iHearRadio Music, MTV Video Music and Latin Grammy awards in his portfolio, as well as seven Grammy nominations.

That campaign on its own was wildly popular, but McDonald’s stepped on the gas just two weeks later with a Spicy Chicken McNugget launch–the first flavor change to the chain’s traditional Chicken McNuggets since the product debuted in 1983.

The success of this limited-time offering is also reportedly leading to a shortage, which, again, should be no surprise to those astute pop culture aficionados. Recall the phenomenon that was Wendy’s spicy chicken nuggets making a strong comeback thanks to Chance the Rapper’s tweet that generated a staggering 2 million likes.

Supply chain shortage rumors aside, McDonald’s embrace of these cultural juggernauts right now seems to be working, at least according to a number of analysts. UBS noted last month that franchisee checks are “better than expected.” Bank of America
raised its estimates after indications of positive credit card data from the chain following the Travis Scott promotion.

Wells Fargo
outright said the Travis Scott Meal helped the brand “connect with an audience that’s been a weak spot over the past 20 years,” meaning specifically consumers ages 11 to 24. McDonald’s has some catching up to do here, particularly against its peers like Chick-fil-A, Starbucks
, Chipotle and Dunkin’, which have all landed on Piper Sandler’s newly released Fall 2020 Taking Stock With Teens Survey. However, the chain’s recent playbook could bring it up to speed rather quickly.

“We think [Travis Scott Meal] could be the start of a new promotional paradigm that weaves in the occasional short-term [limited-time offering] burst along with every day value and occasional six-to-eight week LTO,” Wells Fargo analyst Jon Tower wrote last week.

On Monday, the chain came out with another celebrity collaboration, adding the J Balvin Meal–a Big Mac, medium fries with ketchup and an Oreo McFlurry. The meal will be available through November 1.

Latin pop star artist J Balvin has sold 35 million records globally and, in a press release, McDonald’s CMO Morgan Flatley called him a “trailblazing international icon.” He also has a mantel full of awards, including the Global Icon Award from Lo Nuestro.

Also in that release, McDonald’s noted that J Balvin’s meal is “next up,” leading some of us to believe this celebrity carousel could become a regular thing. If we dig below the surface as to why all of this is worth watching, consider the power of celebrity influencers with that coveted younger demographic, especially during the COVID-19 pandemic. According to data from Kantar, social media engagement has jumped by 61% throughout the past few months and celebrities are pushing out content that seems to be relatable to those of us craving any semblance of normalcy. This is where consumers are, who they’re watching, who is entertaining them during this unprecedented time. McDonald’s thinks that means you’ll also want to eat like them.

And why not? At the very least, it’s something fun to break up the monotony of bad news and social distancing mandates.

McDonald’s will announce its Q3 earnings results on November 9, the same day it will present its 2020 investor update. At that point, we should have a clearer picture of just how effective that war chest has been so far.

Thu Oct 8 , 2020
Jim Duffy plans to tone down his touchline antics this season The white-water rafting trip is on hold. For now, Jim Duffy is relieved simply to immerse himself back into the depths of his beloved Scottish football. A little over three months on from suffering a heart attack – “a […] 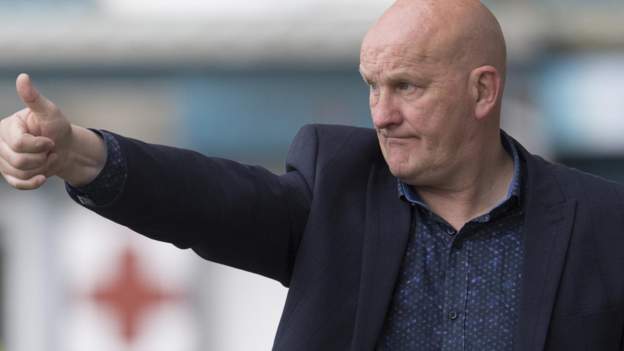