CLOSE As the pandemic hit business across the world, small business owners are coming up with new ways to stay afloat. Renard Bergstrom, owner of Bergstrom Cars, found ways to sustain his car dealerships and not layoff any employees. (July 23) AP Domestic ‘It is public money. The public has […]

As the pandemic hit business across the world, small business owners are coming up with new ways to stay afloat. Renard Bergstrom, owner of Bergstrom Cars, found ways to sustain his car dealerships and not layoff any employees. (July 23)

‘It is public money. The public has the right to know.’

The Ventura County Community Foundation and the Ventura County government are in a standoff over disclosure of the names of hundreds of businesses and charities that received tax-funded $5,000 grants to help them recover from the pandemic, a dispute that could jeopardize the awarding of millions in additional grant money.

County Assistant Executive Officer Mike Pettit said 787 businesses and nonprofit groups have received grants totaling almost $4 million, with the potential that another $20 million could be distributed to other applicants.

But county officials say the foundation has not furnished the names of those applicants who have already received the grants, which they requested to comply with federal auditing requirements.

Earlier this week, County Executive Officer Mike Powers told the Board of Supervisors the county would not move forward with releasing any additional funds until an agreement is reached with the foundation on releasing the names of those receiving the awards.

Powers made the statement after Supervisors Steve Bennett and Linda Parks called for the information to be released before another $8 million in grants was issued.

County official Paul Stamper suggested there might be some resolution by Sept. 25, but Bennett said the issue should not be allowed to drag on.

“I just think we tarnish the whole effort if we create any kind of impression that we are trying to hide who received the awards and who didn’t,” he said. “I am trying to make sure that the Board of Supervisors doesn’t get put in a spot where we are sending the next $8 million and we are still not able to let the public know who is receiving the checks.

“It is public money. The public has the right to know. This issue is only going to grow the longer we are not releasing the information.”

Foundation CEO Vanessa Bechtel did not commit to identifying the businesses when reached by the Star Thursday.

“We are first and foremost a fiduciary and committed to upholding our fiduciary responsibilities,” she said.

The term “fiduciary” generally refers to a relationship of confidence or trust, such as that between an organization and its clients, but it’s unclear how it applies to the awarding of tax-funded grants.

Bechtel said the foundation followed the guidelines published in the final protocol for the grants funded by money the county government received from the federal pandemic relief legislation known as the CARES Act.

She declined to say whether the foundation’s board had decided against releasing the names. The foundation’s attorney, Bill Choi, could not be reached by The Star’s deadline Thursday.

The county guidelines are silent on identifying the businesses. There was no promise of confidentiality in the application for the grants, county officials said.

County Counsel Leroy Smith said the county and the foundation were “at a stall” until the issue was clarified, but that he was trying to reach Choi Thursday.

Pettit said the issue arose after county officials requested the names to fulfill obligations to the federal government for showing how the money was spent. The outside firm that audits the county’s finances also will request that information, he said.

Media outlets including The Star and the VC Reporter also have requested the lists of businesses, he said.

The county received $147 million from the CARES Act to be spent on qualified expenses related to the pandemic and another $19.5 million was approved in the state budget for a total of roughly $167 million.

Supervisors decided voluntarily to use some of the funds to help private businesses, but were not obligated to do so.

“We are saying they are acting as our agent,” he said. “We contracted with them to act on our behalf.”

The local government contracted with the foundation to administer the grants for up to $500,000 in fees, Pettit said.

He said the county contracted with the foundation to administer what was called the Business Assistance Grants Program because it is a trusted partner the government has teamed up with on other programs and would be able to get the money out quickly.

Board Chairwoman Kelly Long said she understands that businesses might be shy about disclosure because they don’t want the public to know they are not doing well or be perceived as taking a handout. But it is important for auditing purposes, she said.

“It is public information and taxpayers’ money,” she said.

Kathleen Wilson covers the Ventura County government, including the county health system, politics and social services. Reach her at [email protected] or 805-437-0271.

Top 3 Service Technologies and Their Influence in Customer Service

Sat Sep 19 , 2020
There is a hype about new technology in customer service, support, and success, but new technologies come new challenges. FREMONT, CA: The progress of video, chatbots, real-time messaging, artificial intelligence (AI), cryptocurrencies, self-service, and even the customer success all display the potential for significant changes in the day-to-day workings of […] 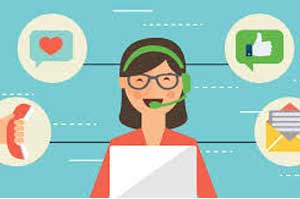