Business activity in Japan’s private sector continued to decline in September, according to the flash PMI data, setting the scene for further economic weakness in the third quarter. Other survey indicators point to a challenging recovery in the coming months, with demand conditions still subdued. However, some rays of light […]

Business activity in Japan’s private sector continued to decline in September, according to the flash PMI data, setting the scene for further economic weakness in the third quarter. Other survey indicators point to a challenging recovery in the coming months, with demand conditions still subdued.

However, some rays of light are appearing. Despite showing the downturn persisting into the end of the third quarter, the survey also showed some encouraging signs: labour markets moving towards stabilisation and business confidence strengthening further, noticeably among goods producers, amid rising expectations that the pandemic will be brought under control in the year ahead. 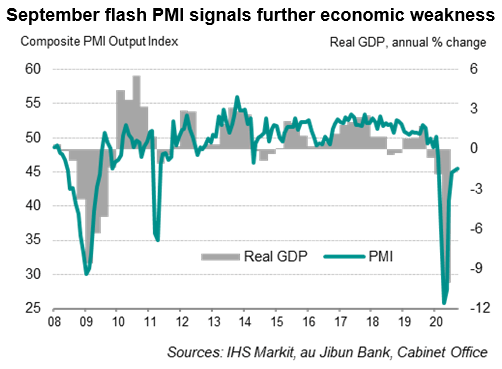 The headline au Jibun Bank flash Composite PMI, compiled by IHS Markit and based on 85-90% of responses received from the monthly surveys, edged up from 45.2 in August to 45.5 in September. The index signalled a further marked decline in private sector output across both manufacturing and services but with the rate of decline easing slightly.

While the latest survey data pointed to a slow pace of recovery from the COVID-19 downturn, particularly in light of stronger recoveries observed in other advanced economies, the picture for Japan’s economy was much improved in the third quarter when compared to the height of the pandemic during the second quarter. At 45.2, the average PMI for the three months ending September was the highest so far this year, and noticeably higher than the 31.5 recorded in the second quarter.

The survey also revealed some positive signs. Firstly, overall employment moved closer to stabilisation in September, with only a marginal drop in workforce numbers that was the weakest fall seen in the current sequence of job shedding. Secondly, business sentiment improved to the strongest since the start of the year, rising especially among manufacturing firms. In fact, the level of optimism in the manufacturing sector rose to the highest for just over two years.

That said, demand conditions remained stubbornly weak, reflecting subdued domestic and foreign markets due to uncertainty regarding the pandemic trajectory and ongoing border restrictions. Inflows of new business consequently continued to fall in September, led by a further export decline. This contributed to further evidence of spare operating capacity: backlogs of work were depleted for a thirteenth consecutive month. 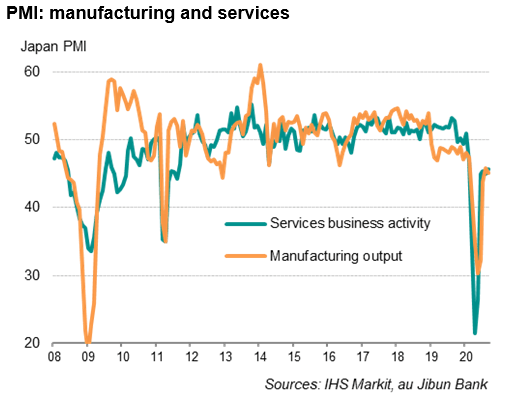 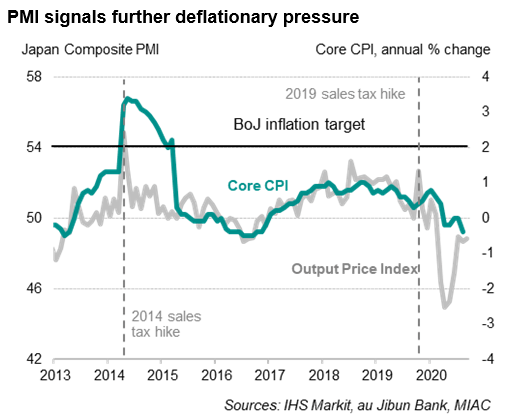 While the worst of the pandemic impact on Japanese economic activity was evident in the second quarter, a robust recovery in the economy is by no means assured.

The resumption of business activity in Japan remains gradual, as uncertainty over the course of the pandemic trajectory continues to weigh on investment and poses as a key risk for Japan’s economic recovery. Meanwhile, weakened labour market prospects and wage declines (due partially to reduced working hours), alongside social distancing practices, will constrain consumer spending in the months ahead.

A more solid improvement in demand is required to lift the economy into expansion territory. A consistently subdued recovery may therefore also require the government to consider additional policy support, depending on the pandemic situation and any occurrence of natural disasters.

Economic policy under the new prime minister Yoshihide Suga is unlikely to change significantly from his predecessor, Shinzo Abe, with the focus of fiscal measures expected to remain on alleviating the negative impact of COVID-19. As long as the economy continues to be affected by the pandemic, there will be limited scope for wider structural reforms, other than those already presented in FY2020/21.

The Bank of Japan is expected to maintain its ultra-accommodative monetary policy and special lending programmes, though the central bank may enhance the lending scheme if the economic situation worsens. 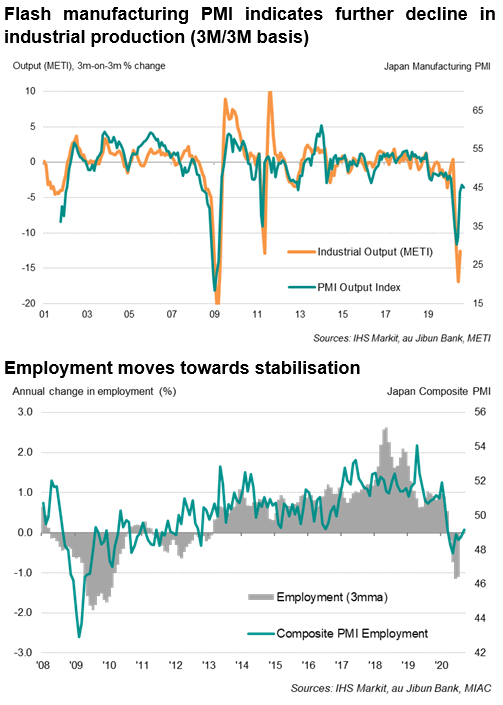 Fri Sep 25 , 2020
B. Riley Wealth Management Inc. purchased a new position in shares of Huntington Bancshares Incorporated (NASDAQ:HBAN) in the second quarter, according to its most recent disclosure with the Securities and Exchange Commission. The fund purchased 11,324 shares of the bank’s stock, valued at approximately $102,000. Other hedge funds and other […]