Feed the People, led by Chef Tarik Abdullah, breathes new life to the former location of Kusina Filipina on Beacon Hill in Seattle. SEATTLE — Seattle’s Tarik Abdullah — AKA Cooka T — is a man of many talents. He’s appeared on several TV cooking shows. After a nod from […]

Feed the People, led by Chef Tarik Abdullah, breathes new life to the former location of Kusina Filipina on Beacon Hill in Seattle.

SEATTLE — Seattle’s Tarik Abdullah — AKA Cooka T — is a man of many talents.

He’s appeared on several TV cooking shows. After a nod from the late Anthony Bourdain he built up a cult-like following of his own.

He’s a chef with 30 years of experience in local restaurants and most recently a popular pop-up style effort that inspired “Feed the People” Seattle.

RELATED: Sit down to dinner with Seattle chef Tarik Abdullah

It’s a community kitchen, of sorts, that combines food with art and culture.

During the pandemic, Abdullah put his cooking talents to work and recruited other chefs and restaurants to help feed people in need. He’s organized numerous community feedings and has built up an impressive collection of supporters who contribute their services free of charge.

While his passion for working with kids and teaching cooking has been on hold during COVID-19, his passion for uniting people with food and community is reaching a boiling point.

Abdullah teamed up with friend and artist Malcom Proctor, also known as Wolf Delux, to transform their neighborhood with color and culture that serves as an outdoor gathering spot.

“Feed The People Plaza” is hard to miss on the corner of Beacon Avenue and  Hanford on Beacon Hill.  “It was an old restaurant, Kusina Filipina, which fed a lot of folks and built up a lot of relationships with a lot of people here.”

Abdullah and Proctor said they simply wanted to clean up a corner and paint a mural.

Over the course of a month-and-a-half they’ve been blessed with over 80 artists who wanted to contribute to the plaza and have painted the walls, sidewalk and even the tables with colorful murals and inspiration for brighter days to come.

Professional artists and kids alike have all found a spot to leave their mark on Feed the People Plaza. The group is hosting a “Vote The Block” gathering on Saturday Oct. 4, with music, art, food and community.

Thu Oct 1 , 2020
Strong winds knocked down trees and utility poles across Massachusetts Wednesday, at one point leaving more than 72,000 customers without power, officials said. Outages ranged from Plymouth County south of Boston to Berkshire County, the state’s westernmost area. As of 11 p.m., there were 2,323 customers still without power, according […] 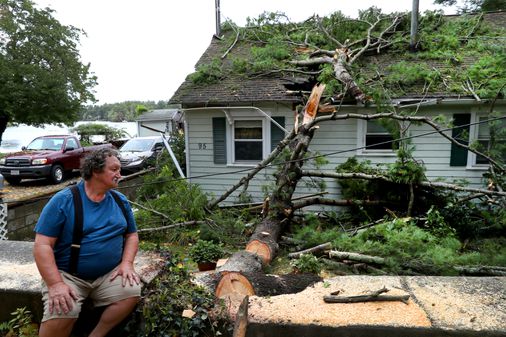