CLOSE An Arizona used car dealer who didn’t pay off trades or transfer title to buyers said last year that if he were ripping off customers, he would be behind bars. Farhad Kankash, owner of Onyx Motorsports in Tempe, was arrested and charged with 14 counts of fraud and theft. (Photo: Robert Anglen/The Republic) […] 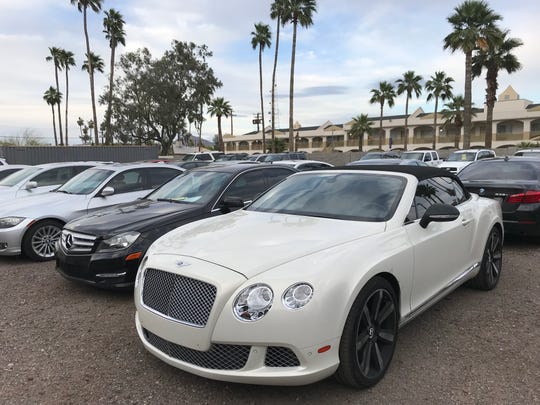 An Arizona used car dealer who didn’t pay off trades or transfer title to buyers said last year that if he were ripping off customers, he would be behind bars.
Farhad Kankash, owner of Onyx Motorsports in Tempe, was arrested and charged with 14 counts of fraud and theft. (Photo: Robert Anglen/The Republic)

An Arizona used car dealer who didn’t pay off trades or transfer title to buyers said last year that if he were ripping off customers, he would be behind bars.

Farhad Kankash, owner of Onyx Motorsports in Tempe, was arrested Wednesday and charged with 14 counts of fraud and theft.

Detectives with the Arizona Department of Transportation accused Kankash of using his now-defunct business to cheat customers and lenders out of hundreds of thousands of dollars.

“What do you want me to do about it?” Kankash told The Arizona Republic in 2019. “If I was taking people’s money, I would be in jail.”

Authorities say Kankash began stealing from from customers in 2018, when he would sell them cars without providing ownership paperwork and fail to pay off trade-ins. They say he also defrauded lenders by obtaining multiple loans on the same vehicle.

Kankash’s arrest comes about a year after an investigation by The Arizona Republic detailed how he sold trade-ins without proper title. The cars were secretly moved from his dealership in Tempe to another in Phoenix, then transferred to new owners without required paperwork. 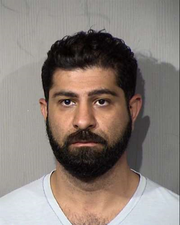 Weeks after driving off the lot, buyers in Arizona and California discovered they weren’t the legal owners of their new rides — and the cars they used as trade-ins were not paid off.

That meant they still owed thousands of dollars for loans on their old cars on top of loans for new ones. Those weren’t their only problems. Cars were inoperable. Promised repairs weren’t made. Insurance policies financed as part of the auto loans weren’t activated.

While Kankash and his sales staff initially assured buyers these were just paperwork snafus, their old cars sometimes were being traded and resold.

Among those was Talia Virrey’s Nissan Pathfinder, which ended up being sold to another customer while it was still in her name and then shipped to Hawaii.

Virrey didn’t know she was still the registered owner of the Pathfinder until the finance company began hounding her for missed payments. She ended up ensnared in a used car nightmare.

Virrey said Thursday she was glad Kankash had been arrested.

“It was so shady, so criminal; he took advantage of hard-working people,” she said from her home in Prescott. “I couldn’t believe it; that someone could do that, not just to me but to a whole bunch of people.”

The Kankash case exposed a lack of protection for car buyers in Arizona, from the inability of state regulators to hold licensed car dealers accountable when they close shop to bogus deals treated as contract disputes despite allegations of fraud.

In 2019, consumers said they received little help from the Arizona Department of Transportation or the Arizona Attorney General’s Office.

They said they were forced to track down their old automobiles, confront managers and negotiate the return of their vehicles where they could.

The Attorney General’s Office is prosecuting Kankash and in 2020 introduced legislation to strengthen laws and better protect car buyers.

“We were able to correct at least most of them,” Harding said.

Detectives were able to research purchases and directly issue title to victims through a process known as a “director’s letter,” Harding said.

But he acknowledged owners still were on the hook for loans that Kankash never paid off. He called those contact issues and said consumers likely would have to go after Kankash on their own for reimbursement.

“That’s more of a civil court issue,” Harding said, adding that Kankash could be ordered to pay restitution as part of the criminal prosecution.

In Virrey’s case, that meant cutting a deal with Nissan. Virrey owed $9,861 on the Pathfinder when she traded in the vehicle to Kankash for a new truck. As far as the finance company was concerned, she still owed the balance.

“I ended up calling Nissan andpaying a settlement,” she said. “It was reasonable. It ended up being $3,000 out of my pocket.”

Kankash insisted last year that he was helping as many customers as he could even as his business went under and closed.

“I helped everybody,” Kankash said in an interview. “I stood up. Everybody got titled. The company wasn’t doing well financially. It’s all good.”

Kankash confirmed customers still owed multiple outstanding auto loans for cars his company failed to pay off but said there was nothing he can do about it. He said it would have to be worked out in civil and bankruptcy court.

Car buyers weren’t the only ones accusing Kankash of fraud.

The owner of a Wisconsin finance company said Kankash took $3.8 million meant for securing inventory and transferred it to several personal accounts before filing for bankruptcy.

Braeger Finance filed a lawsuit against Kankash and his wife last year in Maricopa County Superior Court accusing them of fraud, misrepresentation, unjust enrichment and breach of contract.

ADOT detectives said Kankash repeatedly got finance companies to loan him money on the same vehicle. In one case, he got two $60,000 loans on a 2014 Land Rover and used vehicles he didn’t own as collateral.

Detectives said one of the largest fraud schemes involved a 2014 Bentley that a customer returned. They said Kankash not only failed to refund the customer but instead borrowed twice more against the car.

Business documents, court records, emails and interviews show the owner and managers of Onyx were tied to used car dealerships in Phoenix and Scottsdale.

The dealerships included Onyx, Main Auto Group and RPM Motors in Phoenix, and Luxor Auto Group and Creative Bespoke in Scottsdale. The owners said each business operates independently and is unconnected to the others. The Republic’s investigation found Farhad Kankash moved cars between related dealerships, including Onyx, Main Auto Group and RPM Motors in Phoenix, and Luxor Auto Group and Creative Bespoke in Scottsdale. The owners said each business operates independently and is unconnected to the others. (Photo: The Republic)

Three of the dealerships — Onyx, Main and Luxor — closed amid allegations of wrongdoing. Two owners filed for bankruptcy even as customers and finance companies claimed automobiles and assets were transferred for personal use.

After Onyx closed and went out of business, customers said cars they had traded in and hadn’t been paid off were showing up at Main on Van Buren Street. In one case, a customer said Kankash actually showed up at Main, drove the customer’s old car from the lot and returned it to him.

Kankash insisted Onyx was separate from Main even as managers and customers’ cars moved from one dealership to the other. Kankash was initially a partner in Main, then removed himself from business, corporation records show.

The owner of Main later changed the name to RPM.

The owners and managers of Onyx, Main Auto and RPM have close ties to a Scottsdale car dealership that went out of business after being raided by state and federal authorities. 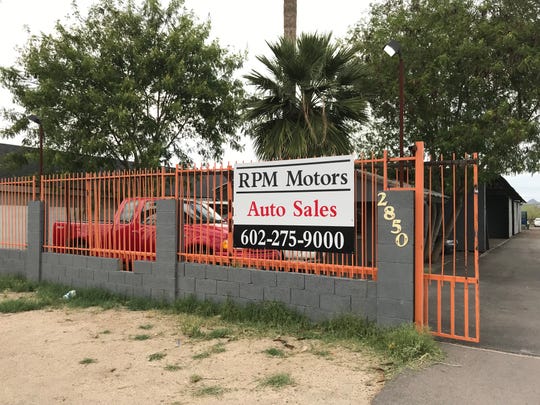 Before opening Onyx, Kankash and his wife worked at Luxor Auto Group on Scottsdale Road.

Luxor’s owners, brothers Hamid and Saeid Salari, were arrested in 2014 and charged with money laundering, conspiracy and currency violations. Federal authorities accused them of using the dealership to front cash purchases of cars for drug dealers.

The charges later were dropped as part of a plea agreement. The Salaris pleaded guilty to one charge each of failing to report a financial transaction in excess of $10,000, a misdemeanor.

Kankash is the Salaris’ brother-in-law. His wife, Sahar Salari, is their sister.

Two finance companies that provided operating capital for Luxor accused Hamid and Saeid Salari in separate lawsuits of taking company assets with a combined worth of $1.3 million.

Automotive Finance Corporation obtained a $866,413 judgment against Hamid in 2015. Despite a settlement agreement, the finance company said Hamid Salari fraudulently set up an irrevocable trust and transferred Luxor’s assets to his new company.

Saeid Salari faced similar allegations of fraud. Nextgear Capital Inc. accused him in a 2017 lawsuit of selling nine automobiles used as collateral for loans. Nextgear said Saeid Salari sold the cars but didn’t turn over the profits. The cars were worth $457,737.

Saeid settled the case for an undisclosed amount. He opened a new high-end car dealership in Scottsdale in 2018 called Creative Bespoke.

Saeid Salari said last year his business is not connected to his sister or Kankash. He said he has not done anything wrong.

ADOT does not name the other dealerships tied to Onyx. Detectives confirmed Kankash sold at least one car, the Bentley, to a dealer operating under the Onyx umbrella.

A grand jury indicted Kankash on Sept. 14. It charged him with seven counts of fraudulent schemes and artifices and seven counts of theft between April 2018 and March 2019.

Kankash was arrested at his Scottsdale home Sept. 23. He was booked into the Maricopa County Fourth Avenue Jail. Court records show he was released on a $50,000 cash bond.

Virrey said it took a long time to put the nightmare behind her, but she is still surprised by what happened to her. Kankash needs to answer for preying on consumers, she said.

“I’m happy he was arrested, but it will be far sweeter when he is convicted so he realizes you don’t do that to your fellow man.”

Robert Anglen investigates consumer issues for The Republic. If you’re the victim of fraud, waste or abuse, reach him at [email protected] or 602-444-8694. Follow him on Twitter @robertanglen

Help us fight for you and support local journalism. Subscribe to azcentral.com today.

Brands to spend $59bn on e-commerce advertising in 2020