Kaylee Crowell, a culinary arts major with a minor in nutrition at Eastern New Mexico University, plans to become a chef or nutritionist and open her own restaurant. She wants to “get as much experience as I possibly can in order to reach my end goal of opening my own […]

Kaylee Crowell, a culinary arts major with a minor in nutrition at Eastern New Mexico University, plans to become a chef or nutritionist and open her own restaurant. She wants to “get as much experience as I possibly can in order to reach my end goal of opening my own restaurant called The Pocket. It would just be something small that focuses on comfort food and that real home food feeling.”

She shares, “I feel the most satisfying thing is when you put your heart and soul into a food item, and someone eats it, and you see that wash of bliss go over their face at what you made.”

Kaylee started pursuing her goal in high school, where she made and sold cupcakes. She then decided to attend ENMU. She explains, “It is the only college in the state that offers a culinary program with affordable tuition and has business classes in the degree program. When I met Chef Charles Broz, he made me excited to come to campus.

“Chef Broz was the whole reason I decided to come to ENMU. When I came for my summer tour, he reminded me of my squirrely self,” she continues. “Chef was one of the best professors I had. He really helped me grow into the person I am now, and, hopefully, I’ll grow into someone he would be proud of.”

The Dean’s List honoree has received several academic and Foundation scholarships for which she is “eternally grateful,” including the Chef Charlie Broz (BA) Memorial Culinary Scholarship.

She works at the Campus Union Dining Hall and with the Department of Agriculture, Food Science and Kinesiology when there are catering events for COPE Foundation events or staff lunches.

Her favorite class at Eastern was French Cuisine. “I got to learn so much from chef and really made a tight community with my classmates that I would do anything for,” she shares. “I also got to meet a new chef, Chef Tyne Sansom, that, in his own way, fit in well with our quirky bunch here at Eastern. I am happy to say that I will miss him in the following class sessions because he was neat.”

Kaylee’s advice to students interested in pursuing a degree in culinary arts is to “learn to accept failure like a tornado because, with each one, you have a new foundation for strong success.”

The junior loves visiting the Dr. Antonio “Tony” Gennaro Natural History Museum, located in ENMU’s Roosevelt Science Center, to see the snakes. “There is a rattlesnake there that I call Dexter who is the most fascinating creature,” she says. “Dexter is elegant in his composition, color and ability to kill all while seeming so docile and calm. Also, I saw him yawn once, and it was amazing.”

Her favorite part of being a Greyhound is enjoying performances from the Greyhound Sound: “The Greyhound Sound Band knows what’s up; all of their concerts, both vocal and instrumental, are absolutely fantastic and the conductors are very welcoming of those who are interested in music but aren’t actually part of the band.”

She was born and raised in Farmington, New Mexico, with one biological sister, who recently graduated from Texas Tech University and is applying to physical therapy schools, and stepsiblings on both of her parents’ sides. “I have a double blended family since my mom and dad remarried later in life,” explains Kaylee. Her mother works as a clinical social worker in the emergency and behavioral health departments of hospitals.

The culinary arts major enjoys competitive swimming, drawing, bird watching, dancing and collecting records and old music. She has a kitten named Toast and dreams of eating at The French Laundry restaurant in California someday. 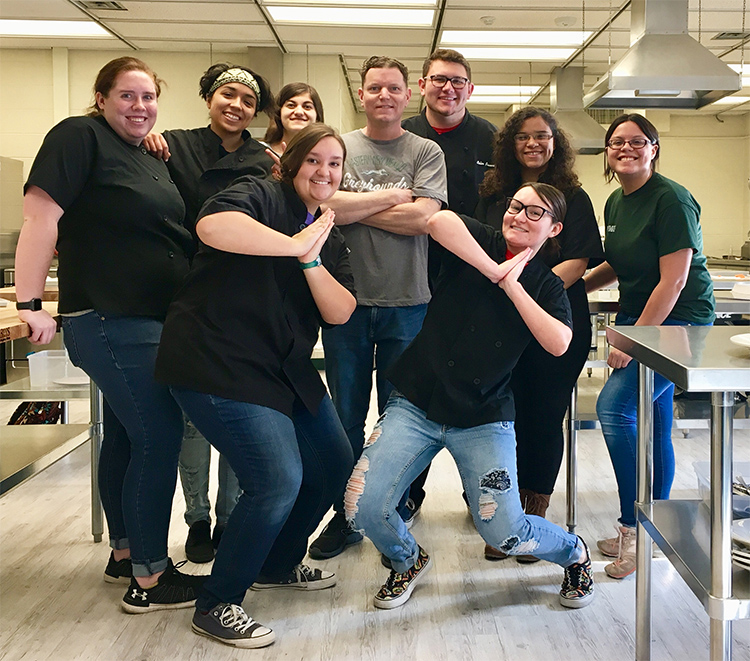 Fri Sep 18 , 2020
If you’re like 15% of B2B marketers, your eyes are squarely focused on account-based marketing—but you haven’t fully invested in the strategic approach just yet. Account-based marketing, or ABM as it’s commonly known, flips classic marketing on its head, targeting a select number of high-value accounts while utilizing personalized content […]