Banks have sat near the technological frontier for many decades but the maturing of artificial intelligence, cloud computing, distributed ledger technology, the internet of things, virtual reality, 5G networks and quantum computing at similar times will create unprecedented challenges for institutions and their regulators. The report points to NAB’s work […]

Banks have sat near the technological frontier for many decades but the maturing of artificial intelligence, cloud computing, distributed ledger technology, the internet of things, virtual reality, 5G networks and quantum computing at similar times will create unprecedented challenges for institutions and their regulators.

The Swiss-based forum, famous for organising the annual Davos shindig, is urging industry leaders and regulators to imagine the outcomes when all of these technologies are combined rather than thinking about them individually. The message is it’s the combined impact that matters.

This will undoubtedly be immense; examples already proliferate.

It’s becoming clear that the most cutting-edge developments are not coming from consumer-facing fintech applications but back-end processes. IT infrastructure and financial system plumbing can appear boring but the forum suggests the most transformative changes are happening behind the scenes, in the B2B world.

“It’s not so much about the threat of competition from Google, Apple and Amazon, but about these companies embedding themselves as enablers for financial institutions to increase value – and this points to the need to create alliances,” says Arthur Calipo, who leads the financial services practice in Australia for Deloitte, which worked with the World Economic Forum on the report.

Given their cloud infrastructure, IBM and Microsoft are the other US tech giants that will play a fundamental role in banking as they help link disparate data sources together to create new insights.

These cloud giants will create new tensions. They will be accessible to new competitors, both fintechs and players in other sectors, unencumbered with bureaucracy and legacy bank systems. Traditional industry lines blur.

Incumbents are starting to understand that it’s not so much speed and efficiency that will be the source of comparative advantage in the future, but their ability to assemble, to execute and to maintain healthy relationships with these powerful third-party vendors and, of course, with customers.

AI and cloud are anchors

Banks will have to be fluent in all of these new and emerging technologies to play in the new economy. The ones that will flourish will need to understand what coordinated deployment looks like and develop a powerful innovation strategy around these interactions.

Artificial intelligence and cloud should be the critical anchors in any investment strategy with other technologies specifically enabled by these, the forum suggests.

Banks all over the world are carefully assessing and developing their relationships with cloud providers. Half of all global banking IT spending is going towards cloud projects, the report says, and deals are getting more sophisticated.

For example, Google and Deutsche Bank announced in July a 10-year cloud partnership that also includes a co-investment strategy for new banking-related technologies and joint product development under a revenue-sharing agreement.

Locally, the forum calls out National Australia Bank’s work with Amazon Web Services as a leading example of the migration of applications from legacy systems to the cloud, including NAB’s entire foreign exchange platform and data lake, part of its large-scale IT transformation project.

IBM, Amazon, Google and Microsoft are battling it out to be trusted partners for major institutions. The forum’s report shows cloud is about far more than moving legacy systems and processes to an external provider, to reduce costs or bolster security.

It’s also about access to much more powerful computing services. Think “artificial intelligence-as-a-service” and “quantum-computing-as-a-service”, where banks can hire the latest systems to perform whatever functions needed.

Cloud providers could also drive banks’ “know-your-client” (KYC) tools, analytics for assessing credit risk, and cyber-security services. “As AI continuously learns from data provided by multiple financial clients it becomes more powerful than what a single institution could develop,” the report says. “Defending against new vulnerabilities will require solutions that are at ecosystem scale.”

While COVID-19 has sucked up the banks’ bandwidth this year, the forum suggests banks use it to accelerate the pace of digitisation, pointing to cautious signs of “regulatory flexibility” towards progressive innovation agendas.

“Conditions for action have never been stronger, giving institutions the licence to pursue these innovation pathways at a pace and sophistication seldom seen before,” it says.

The report provides many other pointers to where financial services is heading over the course of this decade. For example, banks will be forced to play a broader role in the digital “ecosystem” beyond finance, such as becoming a “trusted data steward” under open banking in Australia, and similar regimes, about earning new revenue streams by confirming customers’ digital identity.

White-labelling of products will also become more common, as non-financial players seek to embed financial services in products. An example could be a gig worker application providing short-term loans in the app, based on data generated by the worker. The lender providing the loan might lose a direct customer relationship but could get access to data as a quid pro quo.

The use of sensor technology, real-time distributed ledgers and open data regimes will also see shifts towards continuous assessment of customers, including “just-in-time” lending where business borrowers can tap capital based on a dynamic assessment of their cash flow.

The report points to the birth of outcomes-based investment products, where institutions are paid for delivering a future experience; dynamic life and health insurance, with pricing linked to biometrics; and embedding payments into augmented reality.

Of course, the technological tsunami introduces many new risks, along with plenty of questions on environmental, social and corporate governance. For one, using blockchain and quantum computing consumes a lot of energy.

Deploying AI in a heavily regulated industry like financial services will also inevitably raise many issues, including the need to explain decision making and create “responsible AI” systems, the subject of a report by the forum last year.

The arrival of these new technologies will throw up many regulatory challenges: emerging risks will no longer sit neatly inside a supervised institution but instead could be dispersed across an interconnected set of players, including multinational technology companies and specialised fintechs.

It’s a world where a new entrant can plug in what they need to service the customer without having to build everything themselves.

As Deloitte’s Calipo points out, this creates new, strategic questions for banks. As they turn to big cloud providers, will they also be willing to use a variety of specialist service providers for work traditionally done in-house? Will they be willing to let other companies control customer relationships and supply product in the background, taking a clip of the revenue? And how will they manage the risk of all this?

The forum said its next report in the series will help to answer the third question, by examining how all the new emerging technologies create new sources of risk – but also how they will be able to be used to mitigate them.

Thu Sep 17 , 2020
TAMPA — Tariffs imposed by the Trump administration and other countries are beginning to push up prices and depress demand in spots around the Tampa Bay area and Florida, business executives say. “We’ve definitely seen that the tariffs have increased the prices on steel,” said Chris Bush, an owner at […] 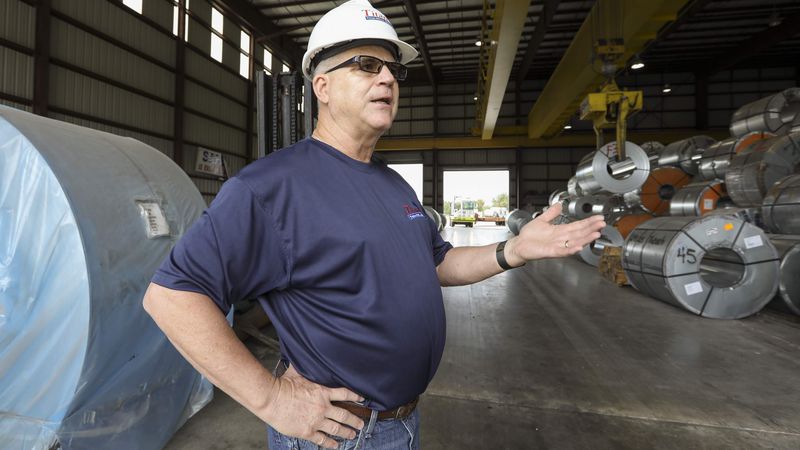