In India, where infections trail only the U.S., total cases approached 5 million. Hong Kong reported no locally transmitted infections for the first time since early July. The city will deploy a new round of its virus relief fund, and will reportedly reopen pubs and swimming pools from Friday.

A vaccine may be available for “ordinary Chinese” as soon as November, the state-owned Global Times newspaper said. In the U.K., researchers are beginning the first study of whether two experimental vaccines can be inhaled.

Subscribe to a daily update on the virus from Bloomberg’s Prognosis team here. Click CVID on the terminal for global data on coronavirus cases and deaths.

Britain has lost almost 700,000 jobs to the coronavirus crisis, a blow to the economy that will heap further pressure on the government to extend its wage-support programs.

The number of employees on payrolls in August is down 695,000 from March, the Office for National Statistics said Tuesday. The number of people claiming for jobless benefits has risen to 2.7 million, an increase of 121% since March.

India is likely to see its economy contract 9% this year, the worst performance among major developing economies in Asia, according to the Asian Development Bank. The country added nearly 84,000 infections on Tuesday to take the total tally past 4.9 million. Deaths rose by 1,054 to cross 80,000.

The ADB estimates that developing Asia will shrink for the first time since the early 1960s. “The economic threat posed by the Covid-19 pandemic remains potent, as extended first waves or recurring outbreaks could prompt further containment measures,” Yasuyuki Sawada, ADB’s chief economist, said in a live-streamed briefing.

Myanmar authorities are rushing to manage a growing number of infections in the country’s largest city, Yangon. Three government rapid-response teams arrived early Tuesday to support the treatment of patients in the city, where only one of 44 townships remains virus free.

The Thuwanna National Football Academy in Yangon has been turned into a 400-bed hospital tent, and some high schools have been temporarily transformed into quarantine centers. Myanmar reported 104 new cases Tuesday, taking the total to 3,299. The death toll was unchanged at 32.

Hong Kong Airlines will cut income and allowances for pilots by 60% from October to March, and extend an unpaid leave program.

Pilots will be rostered for one month of duty, followed by two months of unpaid leave, a spokesman for the airline said.

The U.K. is preparing to extend a ban preventing commercial tenants from being evicted by landlords until the end of the year, the Financial Times reported, citing two unidentified people briefed on the situation.

Government officials are examining how to prolong the ban from its current deadline of Sept. 30, and an announcement could come as early as this week, the newspaper said.

Hong Kong will launch a new round of its virus relief fund as the city’s economy continues to suffer from a recession prompted by pro-democracy protests and worsened throughout the pandemic.

A Covid-19 vaccine may be available for “ordinary Chinese” as soon as November or early December following a Phase III trial that “went very smoothly,” the Global Times said in a tweet, citing the Chinese CDC’s chief biosafety expert.

George Washington University’s enrollment is down about 17% from last year, an early indication of the impact of Covid-19 on U.S. higher education.

President Thomas LeBlanc told a faculty senate meeting that preliminary undergraduate enrollment is about 1,000 students below its target of 10,126, a spokeswoman said Monday.

Hong Kong concluded a Beijing-backed campaign to offer everyone in the city a free virus test. Health experts see the drive as an additional weapon against the disease and preparation for any flareups.

Close to 1.8 million residents — about a quarter of the city’s population — completed tests over the past two weeks, through which at least 32 new infections were identified, according to government data.

Participation trailed the 3 million turnout hoped for by the lab running the project.

The Australian airline said it’s considering moving its headquarters from Sydney as part of an office and property review to cut costs.

“Like most airlines, the ongoing impact of Covid means we’ll be a much smaller company for a while,” Chief Financial Officer Vanessa Hudson said.

United Overseas Bank Ltd. imposed a freeze on hiring, pay and promotions as the Singapore lender prepares for a further decline in earnings after the pandemic.

The city state’s third-largest bank told staff that it expects the situation to worsen before improving when the government cuts some of its support, according to an internal memo sent to senior staff. The hiring freeze will last until December 2021, and any exceptions will need senior approval.

Citigroup Inc. will resume job cuts this week, joining rivals such as Wells Fargo & Co. in ending an earlier pledge to pause staff reductions during the coronavirus pandemic.

The cuts will affect less than 1% of the bank’s global workforce, the bank said in a statement. With recent hiring, overall headcount probably won’t show any drops, the bank said.

AstraZeneca Plc’s Covid-19 vaccine trial remains on hold in the U.S. as regulators examine a serious side effect suffered by a U.K. patient, Reuters reported.

The drugmaker and its partner, the University of Oxford, restarted the U.K. trial of the vaccine on Saturday after it was halted on Sept. 6. The U.K. Medicines Health Regulatory Authority recommended the study resume after an independent review of the safety data had triggered the pause.

However, enrollment of new study participants and other trial procedures remain stopped in the U.S. pending an investigation by the Food and Drug Administration and an independent safety panel, Reuters reported, citing unnamed sources.

Inhaled Versions of U.K. Vaccines to Be Studied (10 a.m. NY)

Researchers are beginning the first study of whether two of the U.K.’s experimental Covid-19 vaccines can be inhaled, a possible way of raising their ability to prevent the airborne infection.

The study will compare vaccine candidates from Imperial College London and the University of Oxford delivered by inhalation through the mouth, according to a statement Monday. The hope is that targeting cells in the lining of the lungs will induce a more effective immune response.

Subscribe now to stay ahead with the most trusted business news source. 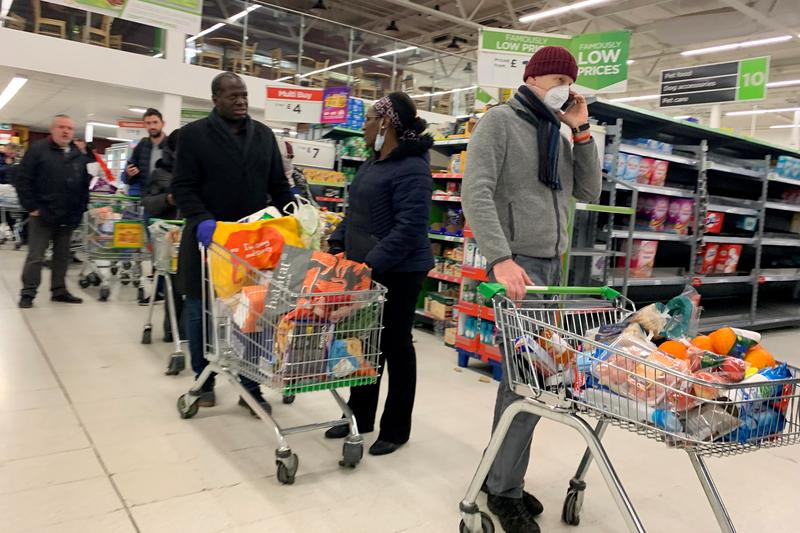