The settlement, which follows a wrongful-death lawsuit that Taylor’s family filed in May, requires police commanders to approve all search warrant applications that are submitted to a judge, said Louisville Mayor Greg Fischer (D) during a news conference Tuesday afternoon. Louisville police will also have to conduct extensive risk assessments […]

The settlement, which follows a wrongful-death lawsuit that Taylor’s family filed in May, requires police commanders to approve all search warrant applications that are submitted to a judge, said Louisville Mayor Greg Fischer (D) during a news conference Tuesday afternoon. Louisville police will also have to conduct extensive risk assessments before applying for a warrant.

At least two officers now will be required to have their body cameras turned on when money seized during an investigation is impounded, being counted or processed, Fischer said. And in an effort to bolster the police department’s ties to the community, officers will be given up to two hours per week of paid time for community service, and the department will explore incentives for officers to live within certain low-income areas of the city.

The city also has agreed to hire more mental health experts and pair them up with officers who respond to calls, Fischer said.

“This settlement is of mutual interest,” said Sam Aguiar, an attorney for the Taylor family, in an interview Tuesday. “The city was able to afford this level of justice, and Breonna Taylor’s mother has been adamant from day one that reform was needed to reduce the likelihood that no other family has to endure this type of tragedy.”

The settlement follows weeks of private talks between the two parties, Aguiar said.

“This is probably the largest settlement for police misconduct in the history of Louisville and includes substantial police reform, as well,” he said.

The settlement does not include an admission of wrongdoing by the city or the police officers involved in the raid, Fischer said. Lonita Baker, another attorney for the Taylor family, said her clients did not plan to file additional lawsuits.

Settlement amounts in fatal police shootings vary widely. In a 2015 Washington Post account of awards in civil lawsuits, payouts ranged from $7,500 to $8.5 million. Last year, the city of Minneapolis settled a lawsuit with the family of 40-year-old Justine Ruszczyk Damond, who was shot by an officer after calling 911 about a possible crime, for $20 million.

Some of the highest-profile deaths in police custody in recent years have resulted in settlements around $6 million. New York City in 2015 resolved a lawsuit with the family of Eric Garner, an unarmed Black man who died after being put in a police chokehold, for $5.9 million. Baltimore agreed to pay $6.4 million to the family of Freddie Gray, who died a week after suffering a severe spinal injury while handcuffed in a police van. And the city of Cleveland settled a lawsuit with the family of 12-year-old Tamir Rice, who was shot while playing with a toy gun in a park, for $6 million in 2016.

Louisville’s settlement with Taylor’s family will not affect the ongoing investigation by Kentucky Attorney General Daniel Cameron (R) of whether the officers who raided Taylor’s apartment should face criminal charges stemming from her death. The Justice Department is also investigating the case.

The Taylor family attorneys signaled they would continue their demands that criminal charges be filed. Attorney Benjamin Crump called on the state attorney general to charge the officers involved in the raid “immediately, this week” with, “at the very minimum, second-degree manslaughter charges.”

“Justice for Breonna Taylor is multilayered,” Baker added. “What we were able to accomplish today through the civil settlement against the officers is tremendous, but it is only a portion of a single layer.”

Activists who have been protesting Taylor’s death for months said they, too, would keep calling for criminal charges.

“No amount of money will bring back Breonna Taylor. We see this settlement as the bare minimum that one can do ” Until Freedom, a New York-based group that has been heavily involved in making Taylor’s case a defining symbol of the racial justice movement, said in a statement. “True justice is not served with cash settlements. … We need accountability. We need justice.”

At the news conference, Until Freedom co-founder Tamika Mallory demanded that Fischer fire all of the officers involved in Taylor’s killing if Cameron’s office does not indict them. Fischer declined to make that promise.

Experts, meanwhile, expressed skepticism that the announced policing overhauls were as significant as officials portrayed them to be.

Geoffrey P. Alpert, a criminology professor at the University of South Carolina, said he was surprised that Louisville police did not already require commanders to approve warrants and provide incentives for officers to live in the city. Those policies are common practices in police departments across the country, he said.

“If they’ve never had that in Louisville, this is going to be a big improvement,” said Alpert, who is also a co-author of “Evaluating Police Uses of Force.” “This is going to be meaningful. It’s just shocking or a shame that this is new to Louisville.”

Eugene O’Donnell, a professor at the John Jay College of Criminal Justice, said he doubts that the changes in how search warrants are carried out will make people safer in police raids. He said the best solution is for police agencies to execute fewer search warrants, especially when they deal with nonviolent crimes such as drug investigations.

“You can candidly have a conversation with the community and say, ‘Those days are over, and we don’t do that anymore,’” O’Donnell said. “Going into a stranger’s home, who may have a firearm, is going to be dangerous, especially in this environment where policing is three times as hard.”

O’Donnell added that a reform-minded police department should be looking for ways to reduce “physical-force policing.” He said the public, and increasingly police themselves, are seeking out solutions that involve fewer face-to-face encounters between officers and suspects.

“People are demanding an end to violence … and a lot less policing,” O’Donnell said. “If you know who these people are, you can identify them, you can submit evidence to court, you can ask them to surrender and seek their appearance.”

“What do you say then to the young Black man or woman, young trans woman, who says, ‘I don’t think this is an error. I think this is baked into how and why law enforcement operates’?” Goff said. “This set of solutions has nothing to say to that person.”

Chanelle Helm, a lead organizer for Black Lives Matter Louisville, said protests are still occurring in the city nearly every day, and Tuesday’s settlement will do nothing to slow them. Helm said Taylor’s death has now come to represent the broader fight for racial justice and many of those issues have still not been addressed.

“I think [Taylor’s] legal team feels like they have gone as far as they can go,” said Helm, 40, who is Black. “But for us on the front lines who are fighting to defund the police, fighting for our neighborhoods, and fighting for justice. … We know this fight is not over.”

Taylor was killed March 13, when plainclothes police officers carried out a “no-knock” search warrant at her home shortly after midnight as part of a drug investigation. Taylor was asleep at the time, according to the family lawsuit.

Her boyfriend, Kenneth Walker, 27, who was also at the apartment, fired a shot with a gun he legally owned and later said he thought the officers were intruders. The officers shot back, and Taylor was struck five times.

The officers said they identified themselves before forcing in the door to Taylor’s apartment with a battering ram, but Taylor’s family disputes that claim in the lawsuit. Police did not find drugs at the home.

Although Walker was initially charged with the attempted murder of a law enforcement officer, the charges were dropped. Louisville has since banned the use of no-knock warrants.

Wed Sep 16 , 2020
Agents Sue Pinky Benson and Brad McCallum on Tuesday shared how they turned video into a pivotal part of their business. Keep connecting and growing. Don’t miss the upcoming Connect Now events in October, November, and December. We’re actively adding new content and speakers to the lineup. Click here to learn […] 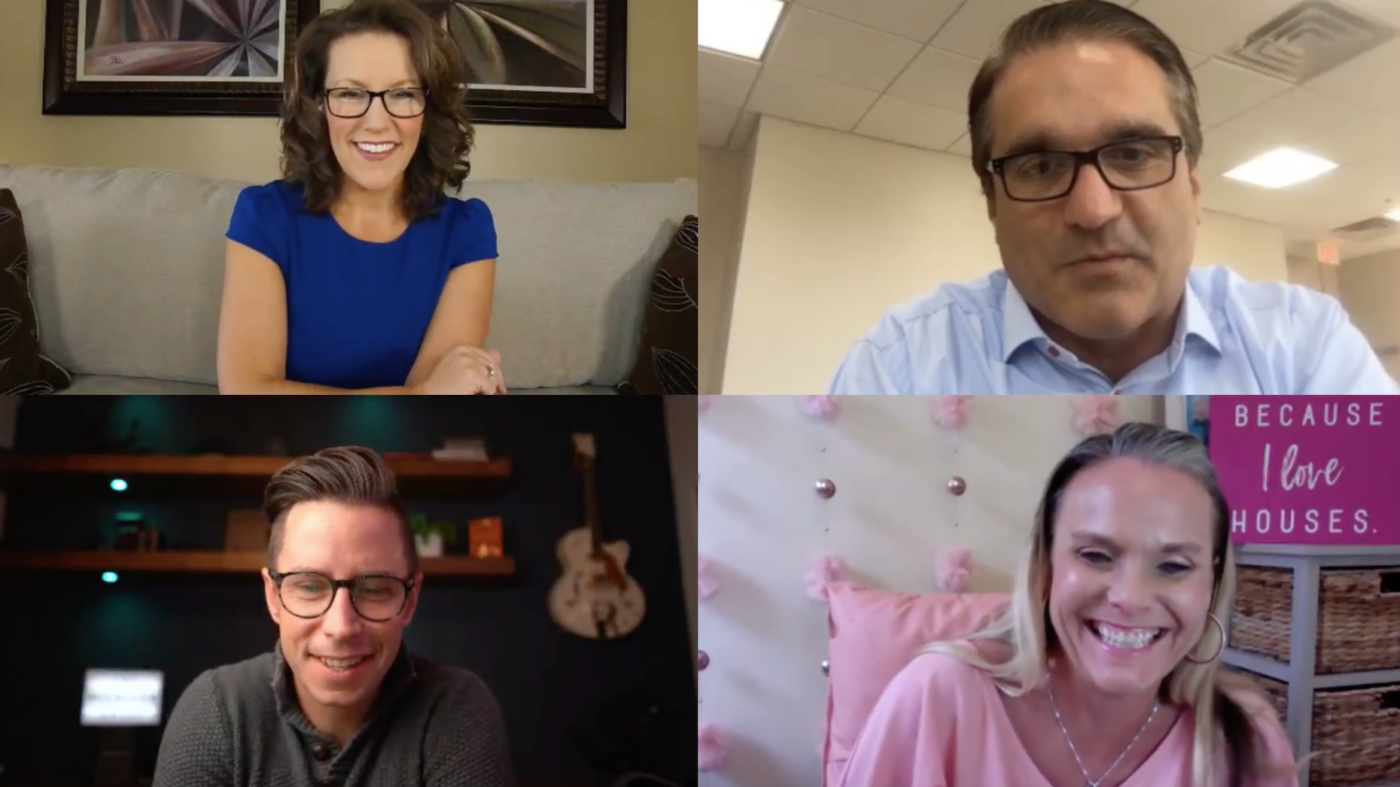