Vancouver, British Columbia–(Newsfile Corp. – September 16, 2020) – Benz Mining Corp. (TSXV: BZ) (the “Company” or “Benz“), is pleased to announce that it has appointed two highly experienced directors to the board along with three senior executives with significant gold sector expertise to assist the Company as it transitions […]

Vancouver, British Columbia–(Newsfile Corp. – September 16, 2020) – Benz Mining Corp. (TSXV: BZ) (the “Company” or “Benz“), is pleased to announce that it has appointed two highly experienced directors to the board along with three senior executives with significant gold sector expertise to assist the Company as it transitions towards a dual listing on the ASX and developing the high-grade Eastmain gold mine project in Quebec.

Board and Management Appointments

Mr Evan Cranston has been appointed as Chairman, replacing Mr Nick Tintor who will remain as a Non-Executive Director, and Mr Peter Williams has been appointed as a Non-Executive Director. Mr Cranston, based in Perth, Australia, is an experienced mining executive with a background in corporate and mining law. He is the principal of corporate advisory and administration firm Konkera Corporate and has extensive experience in the areas of equity capital markets, corporate finance, structuring, asset acquisition, corporate governance and external stakeholder relations. Mr Cranston holds both a Bachelor of Commerce and Bachelor of Laws from the University of Western Australia.

Mr Peter Williams is a geophysicist with more than 30 years of expertise in mineral exploration, corporate management and business development, including Chief Geophysicist and first General Manager of Geoscience Technology at WMC Resources in Australia and senior roles with ASX-listed companies, IGO Ltd, Ampella Mining Ltd, Boss Resources Ltd, and Alderan Resources Ltd. Peter has extensive experience in commercially successful exploration for different mineral systems around the world, in both greenfields, brownfields and in-mine exploration. He pioneered the use of electromagnetics in mines in WMC and IGO, which led to numerous commercial discoveries. He is the co-founder of Intierra which was acquired by S&P Global Market Intelligence, HiSeis, the first global 3d seismic company focussed on hard rock mining and Elemental Royalties which has recently listed on the TSX-V.

Mr Braud is an experienced geologist and mining analyst with over 15 years experience in a broad range of deposits and commodities. His geological experience spans the whole spectrum of geology from greenfield exploration to resource definition and extension. For the past three years he has been a Resources/Mining Analyst at Patersons Securities and Canaccord Genuity covering ASX-listed small and micro-cap resources companies. Mr Braud is currently a director of ASX-listed Riversgold Limited.

Dr. Giovenazzo has nearly 30 years of mining exploration experience where she was responsible for several exploration projects at various stages. She has experience in Canada as well as abroad (Argentina, Australia, West Africa, Finland, Brazil and Greenland) working for various mining and exploration companies such as Newgenco Pty Ltd., Castillian Resources Corporation, XStrata Nickel, Falconbridge Ltd. and Newmont Goldcorp at the Eleonore Mine.

She is currently the President of the “Ordre des Geologues du Quebec”, a Professional Geologist (P. Geo) and acts as a competent person as defined by NI-43-101. Dr. Giovenazzo also serves as an Independent Director on the Board of Directors of SOQUEM, which is a leading government institution in Quebec’s Exploration and Mining Industry.

Mr Fowler is an experienced Canadian capital markets professional with extensive background in the natural resources sector built up over the last 15 years. He has a strong knowledge of the global mining sector and an extensive network of mining executives from prior roles in institutional sales and investment banking for Merrill Lynch, Wellington West, National Bank Financial, Paradigm Capital, and Red Cloud Securities. Mr Fowler is a CFA charterholder.

Dr. Abzalov is a geologist with over 40 years of global geological experience. He was previously Geology Manager at WMC Resources and Exploration Manager – New Opportunities at Rio Tinto. He is a specialist in 3D geoscience analysis, geostatistics and resource estimation having created the Localised Uniform Conditioning modeling method for which he recently received the Dani Krige’s Gold Medal from the South African Institute of Mining.

Mr Johnston is a geophysicist with over 30 years of experience worldwide. He was previously Chief Geophysicist at IGO Limited and held senior positions with LionOre, Rio Tinto and WMC. His expertise with the appropriate use of electromagnetics to target mineral occurrences will help Benz unlock the potential in the Upper Eastmain Greenstone Belt.

Dr. Tuscherer is a geologist with over 20 years of mineral exploration experience. A Professional Geologist registered with the Ordre des Geologues du Quebec (P. Geo), he has extensive experience with the greenstone belts of Quebec having recently held senior positions with Canadian listed entities, Azimut Exploration Inc. and Osisko Mining Inc.

Commenting on the new appointments, Benz Chairman of the Board, Nick Tintor said, “We are delighted to welcome such highly credentialed appointments in Evan, Peter, Xavier, Danielle and Paul during this formative period for Benz. Their expertise and vision will be timely as the Company embarks on its exploration program at the advanced stage and high-grade Eastmain gold mine project in Quebec. We are also fortunate to have quickly build an outstanding technical team with a strong track record of success. Attracting talent of this calibre also demonstrates the significant potential for Benz and its commitment to becoming a gold developer.”

Benz Mining Corp. brings together a strong team of geoscientists and finance professionals with a focused strategy to acquire and develop mineral projects with an emphasis on safe, low risk jurisdictions favorable to mining development. Benz is earning a 100% interest from Eastmain Resources Inc. in the former producing high grade Eastmain gold mine, Ruby Hill West and Ruby Hill East projects in Quebec.

On behalf of the Board of Directors of Benz Mining Corp.

Nick Tintor, Chairman of the Board

To view the source version of this press release, please visit https://www.newsfilecorp.com/release/63948

Sat Sep 19 , 2020
TOPSHOT – Flames rise from a liquor store and shops near the Third Police Precinct on May 28, 2020 … [+] in Minneapolis, Minnesota, during a protest over the death of George Floyd, an unarmed black man, who died after a police officer kneeled on his neck for several minutes. […] 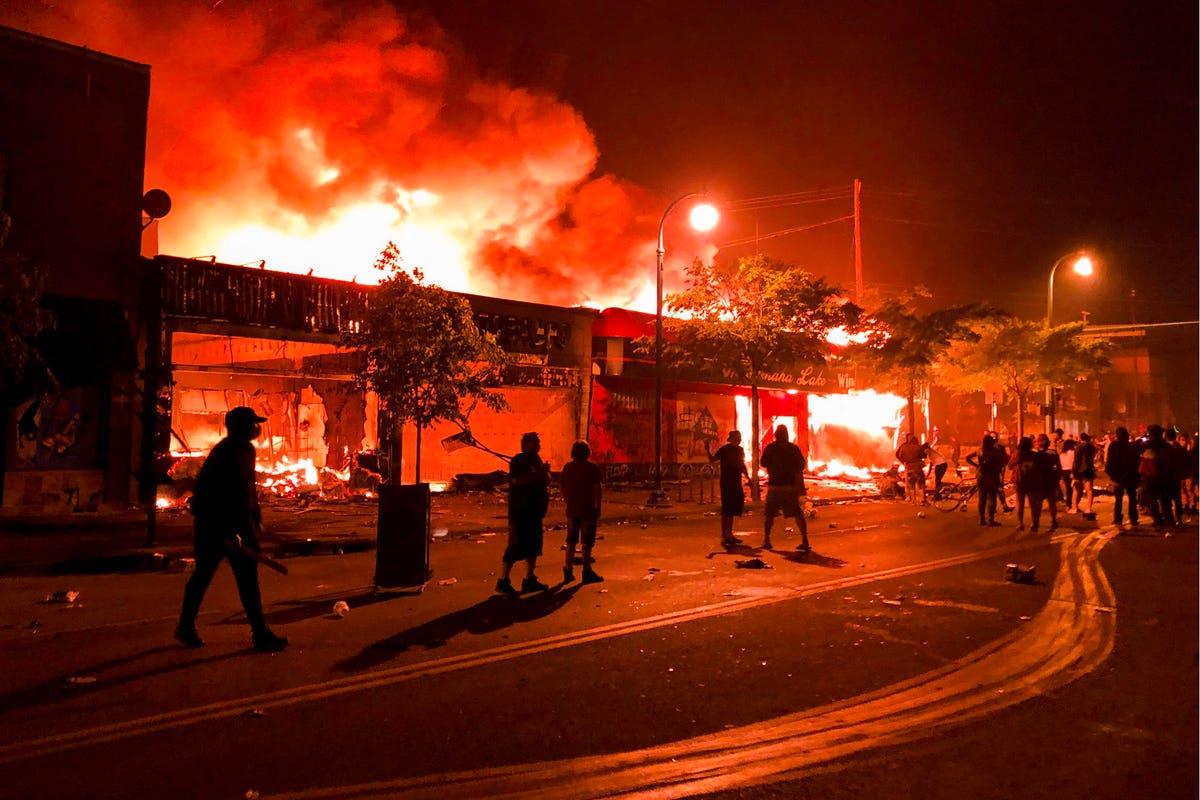