When you look at the chart on Aurora Cannabis (NYSE: ACB) the stock is sliding lower and lower, pushing downwards to all-time lows. The cannabis industry has taken a major hit due to too many companies entering into a brand new industry all thinking that there was going to be […]

When you look at the chart on Aurora Cannabis (NYSE: ACB) the stock is sliding lower and lower, pushing downwards to all-time lows. The cannabis industry has taken a major hit due to too many companies entering into a brand new industry all thinking that there was going to be an overabundance of demand. None of that materialized. There is now an overabundance of supply. Aurora, once one of the darlings of the cannabis industry, has downsized demonstrably from its peak. The company had spent a great deal of its available cash on hand without an in-kind return on its investment (diminishing their defensive position). Since, the company has begun issuing more and more stock to raise cash, continually pressuring the stock price. Now at these much reduced prices, the question I wanted to know is: Could this be a buying opportunity for the stock?

Here is a look at the ACB chart, both on a short-term and long-term basis: 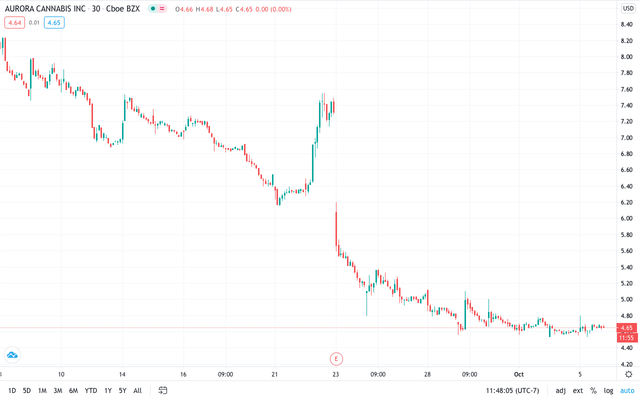 But, it is a look at the all-time chart that shows the extent of the damage: 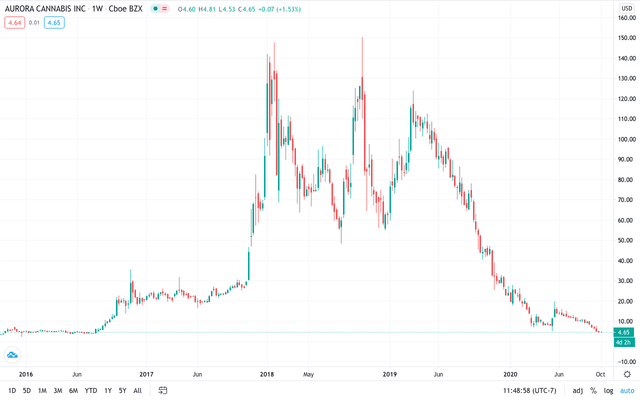 Longtime readers will remember me as one of the authors that not only covered this stock during its heyday, but also as an investor. Unfortunately, while traveling through Central America, I contracted a virus that took me out for over one year’s time (Not this virus, another one). My stocks were all liquidated during that time via my trust. I had done very well with the stock the first time around; I am approaching this stock from a new perspective of wanting to get back in.

As I mentioned, the cannabis industry saw a tremendous amount of investment when legalization was first passed in Canada (which, admittedly even I had gotten caught up in). There was a huge amount of euphoria as stocks were pushed up to very lofty levels. Unfortunately, with all of this investment into the industry, there simply was not enough demand to keep up with a multitude of companies churning out too much product.

To give you an example, Aurora’s capacity for production, previously, was approximately 625k kilograms of flower annually. Last year, the company sold a whopping 52.5k; less than 10% of capacity. They spent some C$775M in cap-ex and burnt through another C$780M in their first couple of years to build up the capacity that, as it turns out, would not be needed; they have begun to either close operations or sell off assets. The company was hemorrhaging cash with a run rate of some C$80M annually. (Sources: Aurora Cannabis Investor Relations)

Because of this, Aurora has undertaken major steps in addressing their cash burn:

Aurora is addressing their profitability and expects to achieve EBITDA in the next few quarters. Still, the company was aggressive at making cuts and the company has cut some 25% of its production staff as well as an additional 30% of total production. And, their run rate for SG&A now is approximately C$42M annually. This will go a long way to protect their future venture.

Aurora currently has some C$239M of cash on hand but, they also have an additional C$593M in debt. They sold shares At-The-Money (ATM) totaling some C$400M in April of 2019 and have allotted themselves the ability to sell an additional C$350M this year, doing so in April which has continuously pressured the stock price because of this.

Aurora has changed its focus considerably. The company had focused its efforts on the medical cannabis segment. This was in lieu of remaining focused on its core, more profitable pre-rolls. The medical segment of the business now accounts for some 64% of gross profits. However, the recreational side of the business, in Canada, is considerably larger. It would appear that during the company’s restructure and reset, they lost track of vital business opportunities.

Prices for products are getting more and more competitive as the oversupply issues continue to weigh on company revenues. It would make more sense for the company to focus on the more profitable recreational side of the business, but, the price competitiveness is even making this more and more difficult for companies.

In the meantime, the company continues to report headwinds ahead, noting that:

As I mentioned, I am looking to invest in this company. But, I think I will pass. The company over-invested and over-spent in the beginning of legalization of cannabis. The company has scaled back production levels dropping some 5 separate sites that add up to about 40 kg of annual production. Also, one of their major facilities, Aurora Sun, has an annual production capability of ~230,000 kg. This facility has been scaled back to just six bays.

The theory is that removing the smaller production facilities will contain costs since these smaller facilities likely have higher production costs due to economy of scale and the lack of Aurora’s keystone automation process at its larger facilities. Further, the scaling back of Aurora Sun allows for the company to ramp up production in the future when necessary. Keep in mind, however, the company produced ~36,000 kg of flower in the recent quarter but only sold ~12,000 kg, about 1/3 of what was produced.

As for whether or not I would invest in this company, as I mentioned, I will pass; I am neutral at this time. I want to see that the company re-prioritizes into the more profitable recreational side of the business, a step back towards where it was. And, I would like to see continued increases in revenues and margins in this area. However, that will admittedly be difficult with price pressures from competition throughout the industry.

But, the company’s faltering in its focus and move into more medical-based sales I think needs to be reversed as there is a much bigger market in the recreational side. Further, The SG&A improvements are just that: Improvements. The company needs to continue with its cost cutting strategy amidst the aforementioned push back into the recreation sales. That could improve the revenue situation and help the company reduce its SG&A numbers.

Finally, the company continues to sell stock, which is the most likely reason there has been a continued, steady, downward push on the stock. Once Aurora has achieved its stock sales they are looking for, along with continued cost cutting and renewed emphasis in key products they produce, this will help to stabilize the stock price.

For these aforementioned reasons, I am neutral on the stock and would not touch it at this time; I believe the stock will continue lower for some time until they finally achieve their goals. I will reevaluate this stock at a later time.

Wed Oct 7 , 2020
Nobody knew what was in store at the onset of the Covid-19 pandemic in March, but when schools and offices shut down and the threat of the virus in New York City was greater than ever, many wealthy families beelined to their Hamptons homes.  Always a sought-after destination between Memorial […] 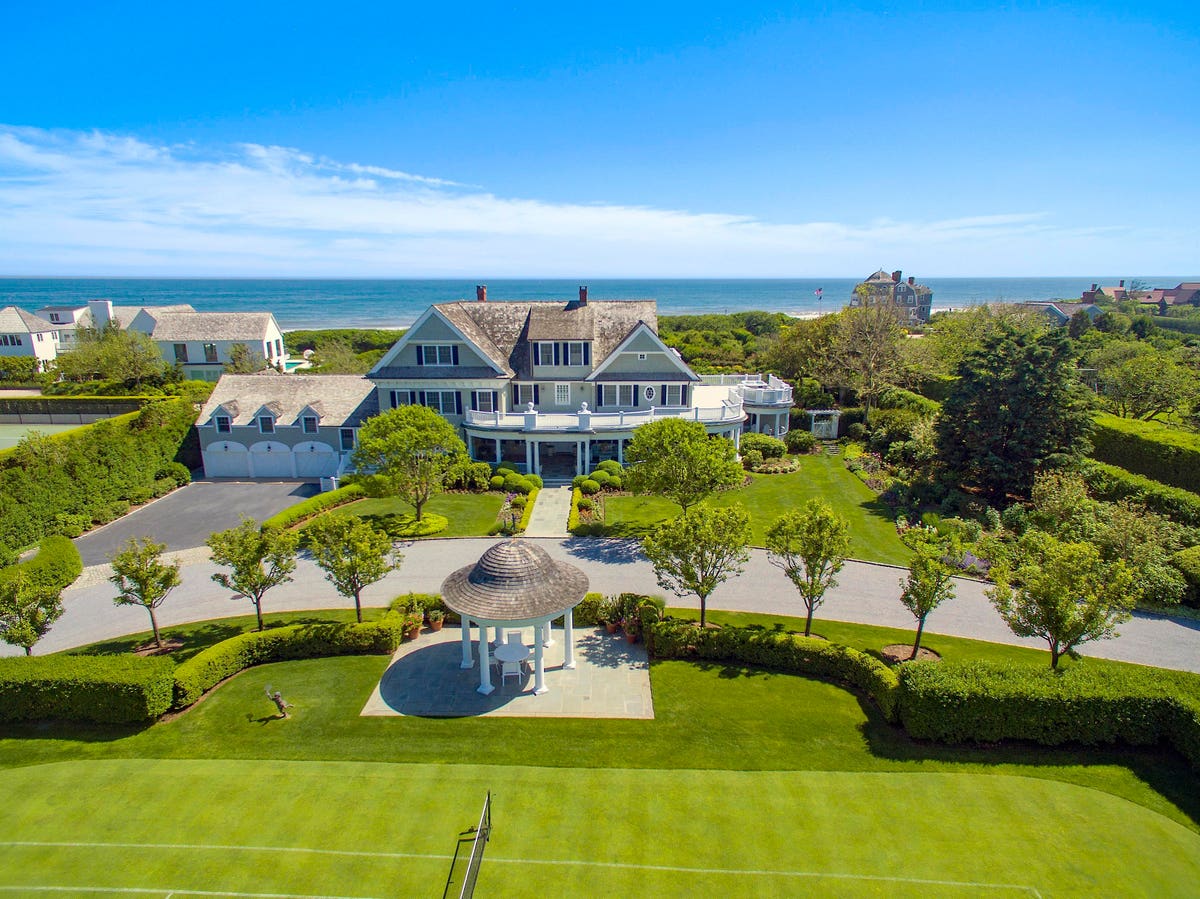