In the worst of times, we reached for our smartphones. It’s no surprise that consumers spent 1.6 trillion hours on their mobile devices in the first half of 2020, up considerably from the same period a year earlier, according to a report from mobile data and analytics provider App Annie. […]

In the worst of times, we reached for our smartphones. It’s no surprise that consumers spent 1.6 trillion hours on their mobile devices in the first half of 2020, up considerably from the same period a year earlier, according to a report from mobile data and analytics provider App Annie.

But one of the report’s findings struck me as both intriguing and counterintuitive. Mobile advertising spending has become a must for companies and brands during the pandemic, App Annie market insights director Amir Ghodrati said in an interview with GamesBeat.

From gaming to shopping, payments, and video conferencing, mobile has become a central fixture in consumers’ lives — ingraining new app habits and permanently shifting the consumer landscape to a mobile-first world, according to App Annie. Advertising on mobile devices is more important than ever because so many users are forming new habits, making this the optimal time to deliver a new ad or brand message, Ghodrati said.

Many companies slashed advertising budgets with the onset of the pandemic because having tens of millions of people out of work in the U.S. alone was expected to lead to a huge dip in consumer spending. But App Annie urges advertisers to rethink that strategy.

The case for mobile ads 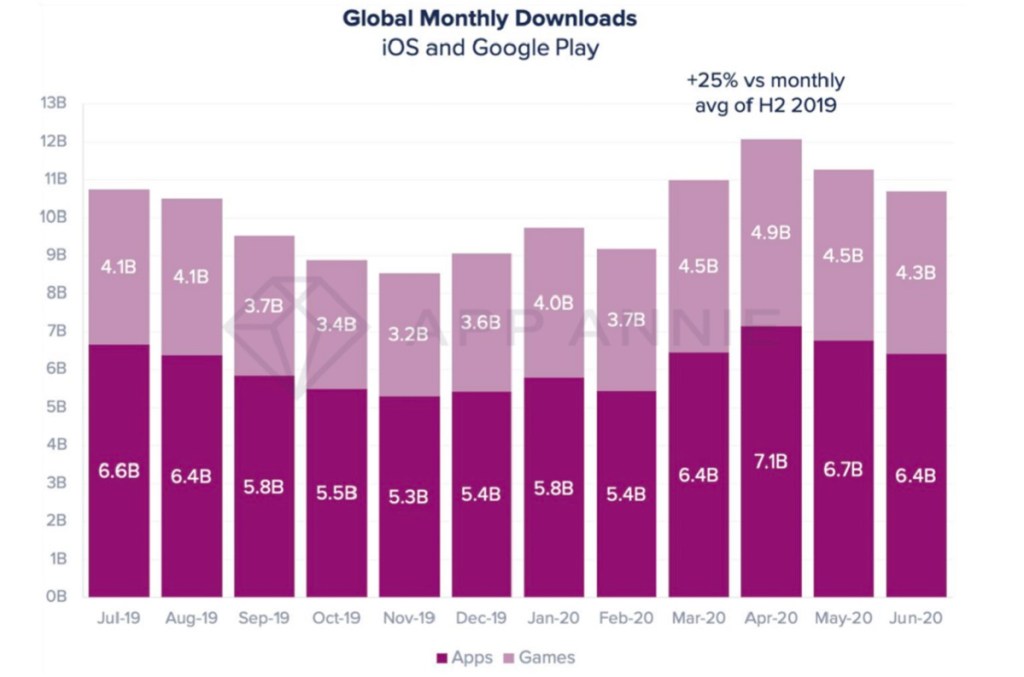 Above: App Annie monitored downloads in the pandemic.

Psychologists have found it takes an average of 66 days to form a habit, App Annie said. As the pandemic stretches into the third quarter of 2020, app habits are solidifying and mobile is becoming even more deeply rooted in routines.

“We’re really seeing people engage with mobile in a way that, even after things revert back to being able to be outside and on the go more, a lot of these habits are going to stick around,” he said. “You get used to that convenience, you get used to that experience, and you realize there are things that you can do that maybe you didn’t know about before. So we expect that overall use of mobile will stay high.”

Once consumers get used to the convenience of mobile — such as the ease of ordering groceries compared to traveling to the store and lugging bags around — it becomes sticky. And that represents a big opportunity for businesses, App Annie maintains.

“It’s similar to what you might have seen in emerging markets over time for mobile, where you really need to be investing in those markets before the boom comes, in terms of consumer spin,” Ghodrati said. “If you wait until that happens, someone else has already set up shop there. And it’s much harder to get someone to stop using something else and start using you than it is to get someone to use you from the beginning and to remain a loyal customer. Once people form habits, it’s hard to change them.”

Even though people are spending more time at home, they are playing games on their mobile phones instead of only on their consoles or computers, with many core games topping usage charts — a testament to mobile’s advanced capabilities and convenience, he said. 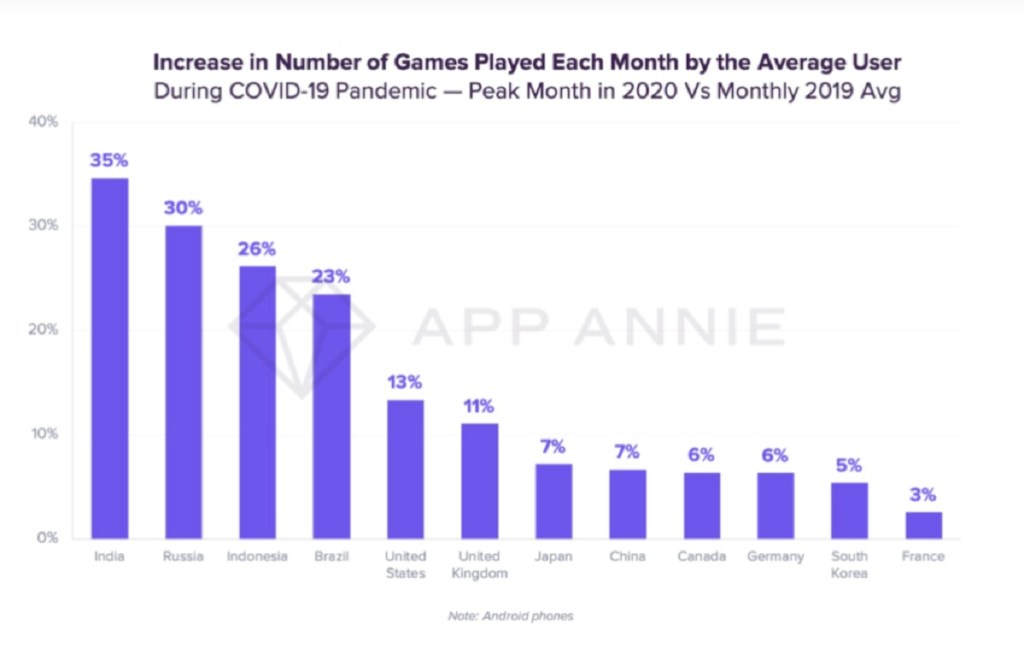 Above: App Annie noted the increase in the number of games played during the pandemic.

Mobile is now cutting into the core gaming market — typically associated with consoles and PC/Mac gaming. Similarly, board games are migrating to mobile and enjoying great success — Scrabble Go saw 455% and 375% growth in time spent quarter-over-quarter in Q2 2020 in France and Canada, respectively.

“For companies, the biggest thing is that if you want your business to be successful, you want to be able to engage with people where they’re spending their time,” Ghodrati said. “And if the world is increasingly spending its time on mobile, you really need to be prioritizing it as a key part of your business.”

Ghodrati reiterated the importance of prioritizing mobile ad spend during this transition. “For user acquisition, this is the time you need to be investing,” he said. “You have to reprioritize what’s in your roadmap from a product management perspective to make sure you’re creating things that are essential for mobile and essential for being able to engage with your [brand or product] at home.” 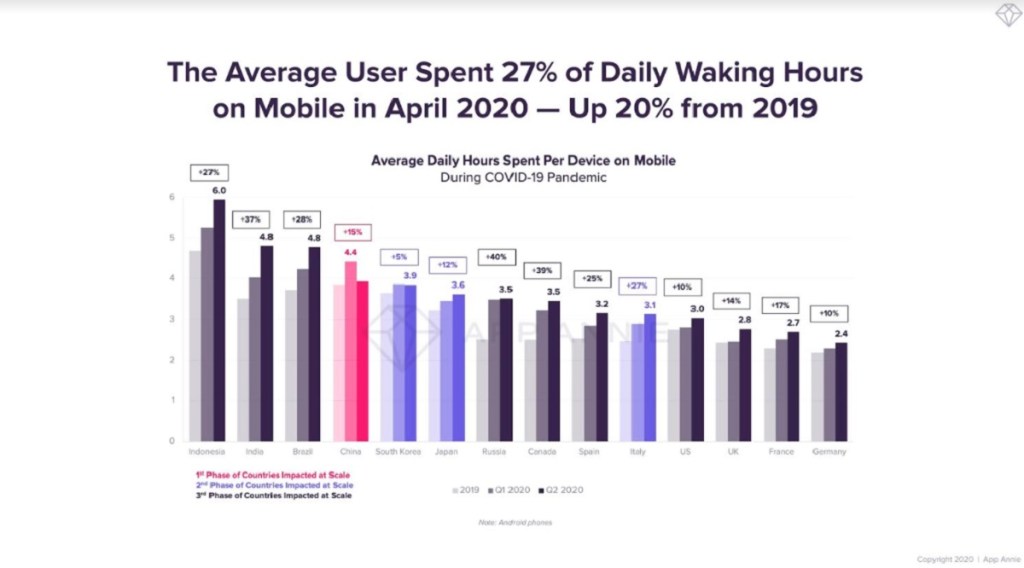 Above: Average users spent 27% of their days on mobile in April.

Consumer spending on mobile hit $50 billion in the first half of 2020, making it the best first half yet for Apple’s App Store and Google Play. (That was up 10% from the second half of 2019).

“There are a lot of changes in behavior and things that people are experiencing for the first time,” Ghodrati said. “The biggest takeaway is just that we are seeing an advancement or an acceleration of existing trends that existed on mobile, but it has basically created a shock to the system that set things ahead by two or three years.”

Downloads of mobile apps and games topped 64 billion in the first half of 2020 across Apple’s App Store and Google Play worldwide. The average user spent 27% of daily waking hours, or 4.3 hours, on their mobile device in April 2020 — up 20% from 2019.

Four of the five top business apps by time spent in Q2 2020 globally (excluding China) were video conferencing apps, including No. 1-ranked Zoom Cloud Meetings, No. 2 Microsoft Teams, and No. 3 Google Meet. Overall, business apps saw a 220% increase in Q2 2020 compared to Q4 2019.

Globally, consumers spent 25% more time streaming their favorite shows and movies in Q2 2020 than in Q4 2019. Social apps blurred the lines with streaming providers — the percentage of Netflix’s iPhone users also using TikTok grew from 15% to 45% in Q2 2020 compared to the second quarter of 2019. 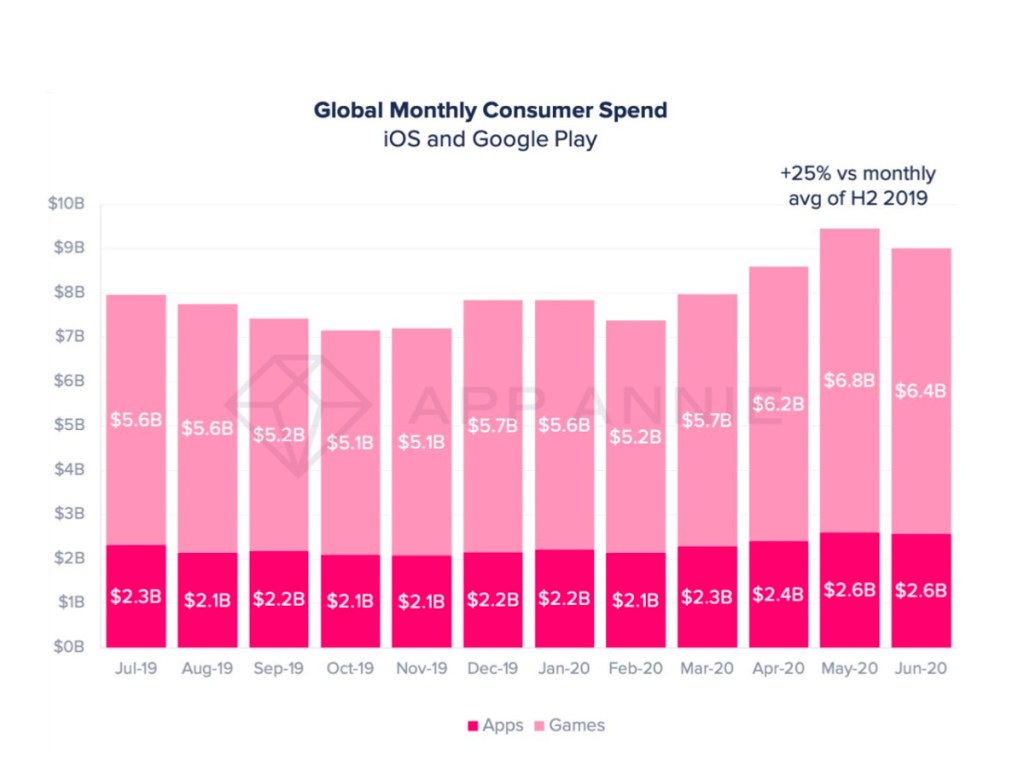 Above: App Annie says consumers are forming new habits in the pandemic. The numbers tell us that.

Wed Sep 16 , 2020
A Nashville investor has purchased the home of one of Chattanooga’s biggest accounting firms, but the sale will not change the location or growth of the company, officials said Friday. JHM Certified Public Accountants, whose principals acquired their office on Olan Mills Drive off of Shallowford Road in 2016, sold […]