When I last wrote about American Eagle Outfitters (AEO) (“AE”) and warned that “it could get worse before it gets better,” I was referring mostly to margin leverage and price competition from rivals like Abercrombie & Fitch (ANF); COVID-19 was not on my radar at that point. Even so, American […]

When I last wrote about American Eagle Outfitters (AEO) (“AE”) and warned that “it could get worse before it gets better,” I was referring mostly to margin leverage and price competition from rivals like Abercrombie & Fitch (ANF); COVID-19 was not on my radar at that point. Even so, American Eagle has managed to outperform peers/comps like Abercrombie & Fitch, Buckle (BKE), and Urban Outfitters (URBN) since that last piece, so at least on a relative basis, I guess my overall positive stance held up.

All retailers are feeling the strain from COVID-19 and the recession, but this could be one of those crises that also creates opportunity for savvy management teams, and I believe American Eagle’s is one of those. With a large portion of the store base up for lease renewal, I think management has an opportunity to push for lower structural store costs and/or cut back the store base and counterbalance some of the deleverage pressures. I still expect American Eagle to be a low single-digit long-term grower, though, as strength at Aerie is counterbalanced by weakness in the legacy AE business. The shares do look modestly undervalued here, but improved visibility on sustainably higher margins would do a lot of good for the valuation.

American Eagle rebounded from a weak fiscal first quarter, both in absolute terms and relative to sell-side expectations, with a better quarter. Revenue beat expectations by 6%, gross margin beat by close to two points, and the company reported a modest operating profit versus expectations of a loss.

Revenue fell 15% year over year and jumped 60% quarter over quarter. While it’s normal for AE to see double-digit qoq growth between fiscal Q1 and Q2, this was obviously stronger than the normal season impact as lockdowns eased and people returned to stores. Management didn’t provide comps, but noted that “total demand sales” were down 19%, with AE brand demand sales down 29% and Aerie up 25% (with reported Aerie sales up 32% to $250M, or almost 30% of the total). Some rough back-of-the-envelope math leads me to believe same-store comps for the physical stores may have been down in the mid-40%’s. E-commerce sales rose 74% yoy and 56% qoq.

On a positive note, management seems to be taking aggressive action on inventory. Average inventory per square foot declined about 24% in the quarter, and that should leave the company with less markdown risk in the third quarter, though perhaps somewhat vulnerable to getting left behind if retail demand were to somehow rebound more strongly than expected.

An Opportunity To Restructure The Business

I am very curious to see what AE does with its store base over the next year and a half or so. Close to half of the company’s store base (500 out of 1,098) is up for lease renewal through the end of 2021, including three-quarters of its C-mall locations (“A”, “B”, and “C” malls is a real estate shorthand for the quality of a property, with C being the worst).

At a minimum, it’s pretty safe to say that mall owners are not negotiating from a place of strength right now. With that, AE should be able to get more accommodating lease terms, reducing the operating cost base for its brick-and-mortar stores.

This process also gives AE an opportunity to reevaluate its true long-term physical store needs. AE’s strong e-commerce position has helped the company through this unusual downturn, but online sales have created margin leverage pressures for the business, and I don’t see those abating. Figuring out the right physical store/e-commerce balance is tricky (and a moving target), but I think AE should consider closing more stores, and indeed the company has announced its intention to close 40-50 stores by the end of this calendar year.

I think AE has an opportunity to reposition its store base toward class A locations; it likely will always make sense for AE to have a meaningful store base, but I think this is a rare opportunity to hack-and-slash those stores that don’t generate attractive margins and limit some of the online-generated deleverage pressures. Keep enough stores open to maintain “share of mind” in high-end malls, and to facilitate/serve customers that want to do in-person returns and try on apparel, but be merciless about closing stores that don’t generate profitable traffic or overlap with other quality locations.

AE remains a leader in denim, and I believe that can support the brand for quite a while to come. Whether the company can generate similar momentum in tops and men’s categories is debatable, but I think it will be a hard slog – what the company has accomplished in denim is actually quite rare, as few retailers (let alone youth-oriented retailers) manage to hold meaningful share in any category for as long as AE has been strong in denim. On the other hand, I still see a lot of potential for the Aerie concept. The company is taking share from L Brands’ (LB) Pink, but I think it has a lot more room to grow.

I’m valuing AE on the assumption of long-term revenue growth in the low-single digits and with some long-term erosion in FCF margins relative to trailing 10 years. Operating leverage has been a real issue for the company in recent years, and it will continue to be a challenge given price competition from rivals and cannibalization from online sales, but I do see some upside potential if management can reposition its physical store footprint and reduce operating costs.

Between long-term discounted cash flow and near-term margin-driven EV/revenue (using a more normalized post-COVID-19 margin estimate), I believe fair value for AE is in the mid-teens, but this is a stock that has delivered strong runs in the past. If AE can continue to generate better than expected sales from online and from the Aerie brand, and particularly if the lease renegotiation process leads to visibility on sustained margin improvement, I can definitely see upside from those mid-teen targets.

Tue Sep 15 , 2020
By Ben Klayman DETROIT (Reuters) – General Motors Co <GM.N> is exploring options in the aerial taxi market, including whether to build the vehicles known colloquially as “flying cars,” as part of a push by the U.S. automaker to look for growth in related transportation markets, two people familiar with […] 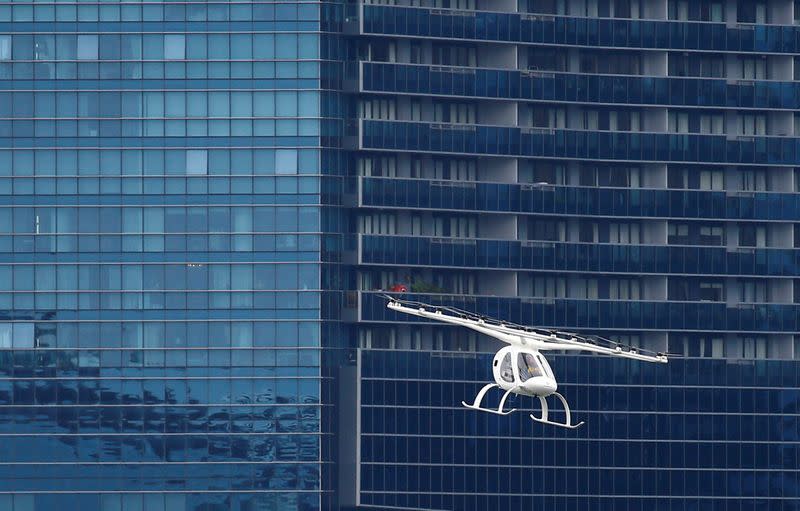