What lies beyond the pandemic? MassForward is MassLive’s series examining the journey of Massachusetts’ businesses through and beyond the coronavirus pandemic. ___________ Restaurants surround the Capitol Theatre in Arlington. A pair of them sandwich the 300-seat auditorium along with a third across the street. Jamie Mattchen, the general manager of […]

What lies beyond the pandemic? MassForward is MassLive’s series examining the journey of Massachusetts’ businesses through and beyond the coronavirus pandemic.

Restaurants surround the Capitol Theatre in Arlington. A pair of them sandwich the 300-seat auditorium along with a third across the street.

Jamie Mattchen, the general manager of the Capitol Theatre, watches patrons visit each of them daily, while her vast auditorium remains empty in part due to Massachusetts coronavirus regulations.

“That’s the part that’s really a kick in the teeth, you can sit in a small restaurant six-feet apart for two hours, take your masks off and it’s fine,” Mattchen said. “But you can’t sit in a giant theater, take your mask off and eat popcorn. To me, it doesn’t make sense.”

Movie theaters in the commonwealth began reopening at the end of August. The images of action movies flickered on the wall-sized screens, but the aroma of buttered popcorn was absent.

Under Massachusetts reopening guidelines, movie theaters are allowed to reopen but aren’t allowed to serve food.

“Most people go to the movies just to eat popcorn,” said Kim Wheeler, the owner of the Agawam Cinemas in Western Massachusetts. “They might not even care about the movie but they care about the popcorn.”

For owners of small family-operated movie theaters, the future of their businesses hinges on the popcorn and candy and soda and all other concessions.

In Millbury, Jim Perry planned on reopening the singled-screened Elm Draught House Cinemas after Labor Day until he realized he couldn’t serve food.

The $6 he charges for admission covers the cost associated with gaining the rights to play the movie in his theater. The profit to sustain the Elm, Capitol and Agawam cinemas comes from the concession stand.

When asked why movie theaters couldn’t follow the same safety guidelines as restaurants and serve food, Baker said his administration is examining the topic.

“The big issue associated with a lot of this is just around contact generally,” Baker said at the start of the month. “I’m aware that this issue has been raised by a number of these folks, and obviously some of them have submitted recommendations, suggestions about how this could be done in a way they believe would be safe. We literally just got those, and we’ll certainly take a look at them.”

As the industry entered its sixth month of closure, many across the state were lit in red on Sept. 1 as a sign of solidarity for Congress to pass the RESTART Act, which extends the Paycheck Protection Program.

It’s a movement larger theaters hope will grab the attention of lawmakers.

The national demonstration wasn’t aimed at Baker and Massachusetts, but owners of smaller theaters remain hopeful the administration will hear their voices.

When golfers spoke out, Baker signed off on courses opening. Pressure from the Trump Administration and the religious community led to churches reopening in the state. Restaurants have kept the pressure on the Baker Administration throughout the pandemic and received expanded outdoor dining options and to-go alcohol sales.

“It’s the industries that have lobbied the hardest and complained the loudest. It’s easy to say movies aren’t necessary like an amusement park and an arcade, but restaurants are necessary,” Mattchen said. “But really you can make food at home. You don’t need a restaurant. But more people were directly impacted by restaurants going away.”

Restaurants never had to close entirely during the pandemic. Even in March, Massachusetts allowed restaurants to provide takeout and delivery orders.

The pandemic still ravaged the industry. By the start of the summer, even some type of option to open, the Massachusetts Restaurant Association said the industry lost $5 billion.

For theaters, they closed their doors in March. Some are still waiting to reopen.

Perry describes his theater as a pub cinema. Tables extend beside certain seats. Other seats have tables in front of them. Perry debated opening just as a restaurant. Put a movie on the screen in front of his customers and it suddenly breaks state guidelines.

The Capitol Theatre includes a creamery serving ice cream. The Arlington Department of Health said if the theater opens for movies, the creamery must close.

Each asset can not legally coexist under current state guidelines.

“It’s hitting us on all ends, unfortunately,” Mattchen said.

Recently, Wheeler saw a post on social media from one of her regular customers. The photo showed popcorn, Twizzlers and a drink in front of a movie screen in Connecticut.

“Just across state lines, that theater is operational and normal and we are in the dark over here and it’s very frustrating,” Wheeler said.

In Western Massachusetts, some smaller theaters have opened. The Greenfield Garden Cinemas is open and Amherst Cinema eyes an opening this month.

The budget doesn’t add up for others, though.

“No matter how we looked at the finances, we are at a 100% loss if we try to open under these stipulations right now,” Wheeler said. “We would be digging our own grave.”

Larger theaters like AMC and Showcase Cinemas are large enough to absorb losses from the lack of concessions and still turn a profit. AMC even reopened with 15-cent movie tickets.

“When you have 14 screens and you have 25 people and you have multiple shows, for those guys you can open up and you can make things happen,” Perry said.

Despite the financial losses, Agawam Cinemas, the Capitol Theatre and the Elm Draught House Cinema plan to reopen at some point, regardless of when that date emerges.

A longtime customer of the theater started a GoFundMe page that raised more than $27,000 for the theater.

“I felt like ‘It’s a Wonderful Life’ with Jimmy Stewart at the end of the movie when everybody was in trouble and came and gave him their last penny they had in their pocket,” Perry said. “That’s what I felt. It was very emotional.”

Perry said the customer who started the fundraiser normally attends the show every Friday night with his wife. His daughter, who grew up coming to the Elm, now brings her child.

“I told them, I want this place to be around so when your grandkids have grandkids, they’ll bring them here,” Perry said.

Mattchen and Wheeler share those sentiments. With spaces up to 5,000 square feet, they have no issues keeping visitors distanced.

They all agree even with the limit of 25 people per show it’s large enough to turn a small profit.

“It’s going to be very interesting, to say the least. But when I open – and I will – just as those in Agawam and Arlington, they want to succeed,” Perry said. “The small guys, we want to succeed. We want to be around for years to come.”

A fear already exists that the industry has already moved beyond them. Netflix and Disney+ have used the pandemic to release movies straight to streaming services and skipping theaters entirely.

The longer the theaters remain empty, the more uncertain the future feels for owners.

“I’m taking it day by day. It’s worse to remain closed – dark screens closed. We can’t try to mitigate any of our losses,” Wheeler said. “If we’re forced to do this for a whole lot longer until there’s a vaccine, my goodness, there hasn’t to be some sort of end in sight.”

‘The Queen’s Cups grew up:’ Canal District bakery debuts new layout, philosophy in reopening its doors for first time since closing due to coronavirus

US military strengthens deployment in Syria

Sat Sep 19 , 2020
The US Army announced Friday it was stepping up its military deployment — both troops and equipment — in northeastern Syria despite a push to limit its presence there, a move that follows tensions with Russia in the region. US Central Command (Centcom) “has deployed Sentinel radar, increased the frequency […] 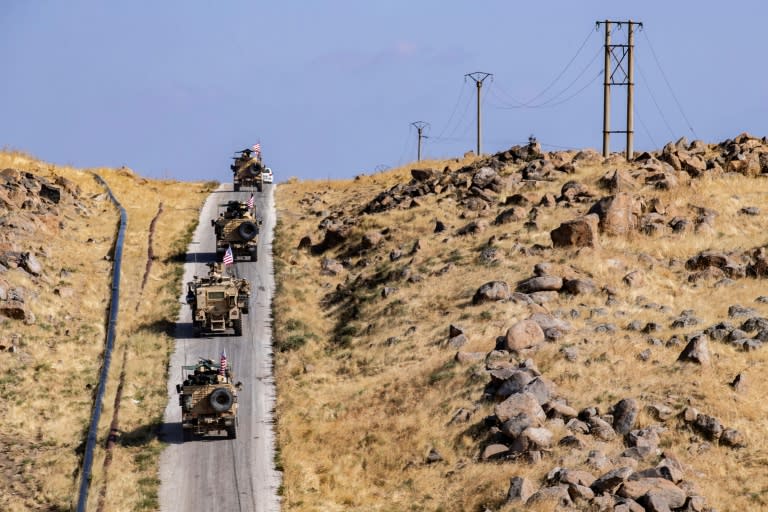